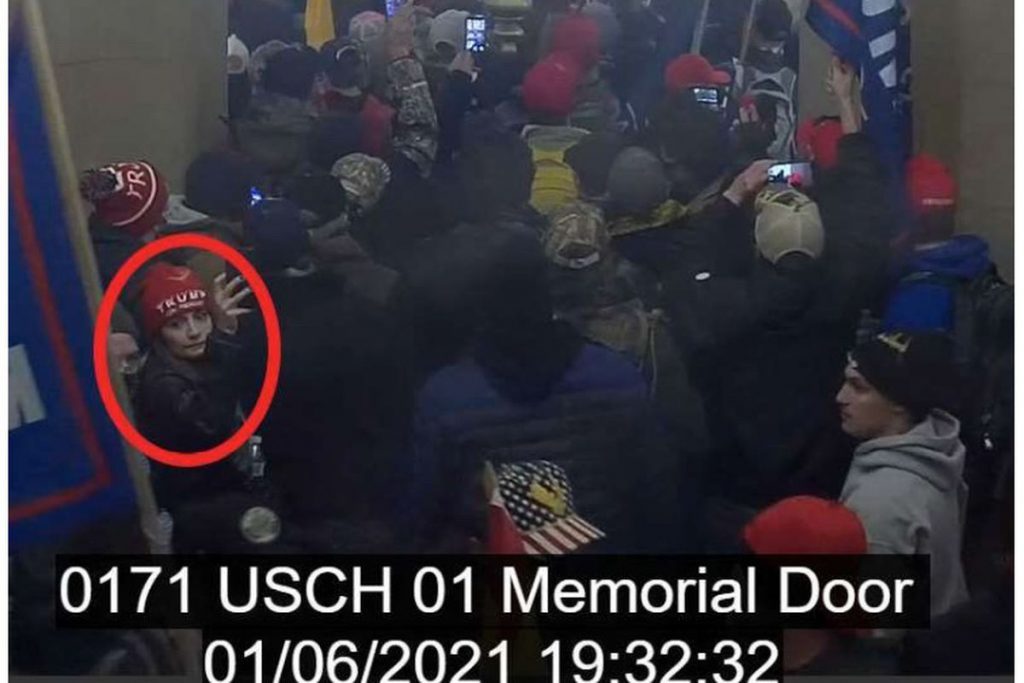 A woman from Indian Head Park was charged last week in the January 6, 2021, invasion of the U.S. Capitol in Washington, D.C.

Leticia Vilhena Ferreira, 32, told FBI investigators last April that she was a Brazilian citizen in this country on a work visa and, despite not voting for him, had flown to Washington, D.C., to hear Donald Trump’s January 6 speech.

She was arrested February 16 on federal charges that she knowingly entered a restricted building without authority and disorderly conduct.

Court documents show that she texted a friend the next day and appeared worried she might be in trouble.

“Do you think they will go after all the people walking in the Capitol area?” she texted.

She also appeared to regret having been involved. “I was so irresponsible to walk there,” she texted.

Her friend also gave her some advice. “If you see crowds gathering today … anywhere … walk the other way.”

Ferreira was first interviewed at her home in the 6800 block of Joliet Road by the FBI in April 2021.

She told investigators that even though she couldn’t vote, she said she wanted to see Donald Trump’s speech.

Ferreira said she didn’t get to hear Trump’s speech because so many people started to march toward the Capitol. She said she followed the crowd to the Capitol and kept on following marchers as they entered the building. She told investigators she took photos and video while inside and spent about 20 minutes inside the Capitol.

She gave investigators photos and video she took. Alarms can be heard sounding inside the building when Ferreira began one of the recordings.

Videos show Ferreira wearing a red stocking cap with Trump’s name on it as she walks into the Capitol and again in the Capitol Crypt when rioters began to rush Capitol police.

FBI records indicate “Ferreira did not appear to have participated in any assault on officers.”

In fact, in the photos and videos of her she almost looks like a tourist casually walking through the Capitol door and taking video with her phone of what was happening around her.

Ferreira appeared February 16 before a federal magistrate judge in Chicago. She was ordered released on her own recognizance and ordered to appear on the case in Washington on Feb. 22. No lawyer was listed for Ferreira on the public docket.

Ferreira’s arrest brought the number of Illinoisans charged so far in the Capitol breach to 24. The ongoing investigation has been described by prosecutors as the largest criminal investigation in the country’s history.

Like Ferreira, most of those arrested in Illinois have been charged with misdemeanors that do not allege they participated in any violence.

One exception is James Robert Elliott, 24, of Aurora, who in December was charged with felony counts alleging he used a flagpole to assault officers while illegally on the Capitol grounds.