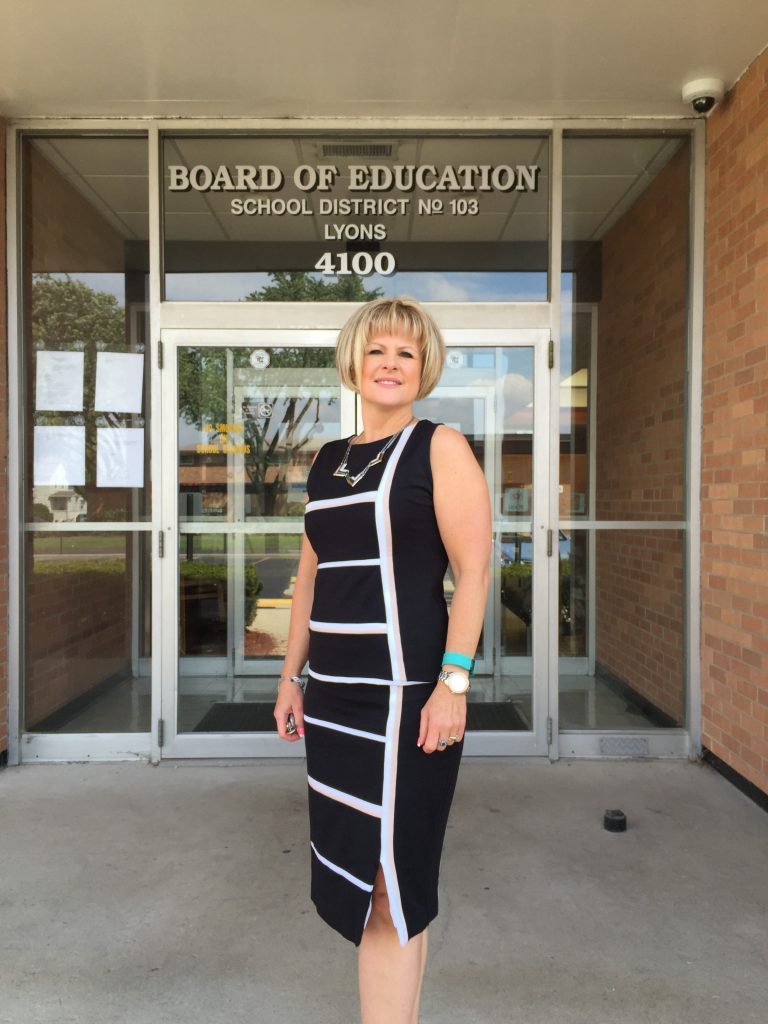 Baker out as assistant superintendent in Lyons SD 103

Carol Baker is out as assistant superintendent of Lyons School District 103.

Baker is still the principal of Washington Middle School and has a year left on her contract, Supt. Kris Rivera said.

According to sources, however, Baker could also be out as principal of Washington.

The School District 103 board of education voted on March 22 to eliminate the assistant superintendent’s job, which Rivera said will save the district roughly $25,000.

Rivera said the decision to end the assistant superintendent job was “financial.”

“And,” he said, “it was hard for her to do (those) additional duties with running a (school) building as well.” 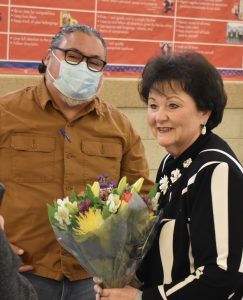 Jan Bernard, who is retiring after 34 years as principal of Edison School, was presented with a bouquet of flowers by Lyons School Board President Jorge Torres. (Photo by Steve Metsch)

Teachers Union President Toni Jackman said she has heard that Baker will no longer be the principal at Washington.

Jackman said “it’s not my understanding” that Baker will stay at Washington. “(My understanding is) she’s out of our building. This is ridiculous.”

It is possible, several sources said, that Baker could wind up replacing Jan Bernard, who is retiring after 34 years as principal of Edison School in Stickney.

Rivera and Baker did not return several phone calls by press time.

During the public comment portion of the board meeting, Jackman – a seventh-grade teacher at Washington – expressed extreme displeasure that Baker could be shown the door.

If Baker is indeed done at Washington, the school would have its 10th principal in the past 22 years, and the sixth principal in seven years, Jackman said.

“It takes a minimum of three years for even the best principal in the best of times, with him or her staff, to get to the point where progress is made,” Jackman said. “Every time we get a new principal, it’s like starting over.”

Baker understands and encourages teachers to get better at their craft, Jackman said reading a prepared statement.

Jackman called Baker “a supportive and intelligent leader, and the leader frankly without whom the middle school and in fact the district would have floundered during the pandemic year.”

“We’ve had a couple good principals. If the board cared about teachers, cared about students, it would care about (personnel) turnover,” Jackman said.

“We love her,” Flickinger said.

“it’s like getting a new mom every year,” she said of possibly getting another new principal.

Miki Milosevic, a paraprofessional for 20 years at Washington, said: “I get chills whenever we get a new person (as principal). Here we go again.”

Earlier in the meeting, Bernard was presented with a bouquet of flowers and hug by board president Jorge Torres.

“When I first got here, the history and support she provided to me was so important,” Rivera said of Bernard.

“Nearly five decades of service,” Rivera said. “Everything Jan has ever done for this district has been fantastic.”

Bernard taught at Costello and Robinson schools, and was an assistant principal at Lincoln School before she moved to Edison 34 years ago.

“I’ve had an amazing career,” she said. “Being principal at Edison School for 34 years has been a highlight of my career.”

“I consider myself extremely fortunate to have served as principal in such a vibrant and supportive community where education is valued as a top priority,” Bernard said.

A large contingent of Edison staff and teachers attended the meeting to show their appreciation.