And they’re off! Hundreds of kids dash across Cermak Park during Lyons’ Easter Egg Hunt on Sunday morning. (Photos by Steve Metsch)

Having grown up in Lyons, Plainfield resident Jennifer Radosevich Mallen knew where to visit for a good Easter egg hunt.

“My parents still live here,” she said. “My grandpa was the mayor of this town for years, William G. Smith. That’s why we always come back to this one because of what I remember growing up.”

Her daughter, Samantha, 7, was among the hundreds of children who on Palm Sunday morning needed maybe five minutes to scoop up 13,000 brightly colored plastic eggs. 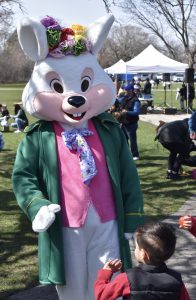 It wouldn’t be an Easter Egg Hunt without this guy.

On Saturday, Radosevich Mallen and her daughter were at Plainfield’s Easter egg hunt, which she described as “a disaster.”

“There were so many kids and not so many eggs,” she said. “There were multiple people who said their kids got no eggs. It was very sad. It was awful.”

Samantha left Plainfield’s hunt without one egg, her mother said. Samantha’s Easter basket was filled with eggs in Lyons.

“This is amazing. Thirteen thousand. I’m so impressed with Lyons’ hunt. I’m glad we came. It reminds me of what we did when I was a kid,” Radosevich Mallen said.

“(This is) one happy parks and recreation director that nobody got hurt in that mad dash,” Tala said after the gleeful sprint.

Tala was happy before the hunt.

The temperature was in the 50s under a bright sunny sky.

Each of the 13,000 eggs had something inside, be in a little toy, keychain or candy.

Fifty golden eggs had coupons inside for a free scoop of frozen custard at Culver’s.

Afterwards, kids posed for photos with six costumed characters, including Tigger, Winnie the Pooh and the Easter Bunny.

Lyons Fire Chief Gordon Nord Jr., estimated the crowd of kids and parents to number around 400. 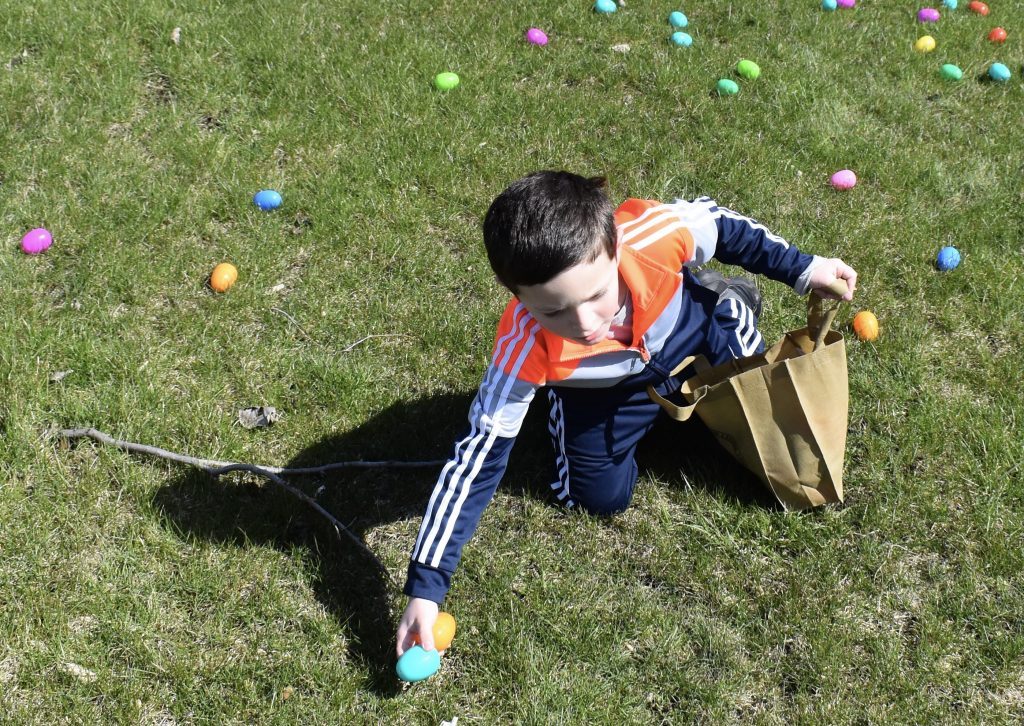 Two eggs in the hand are worth a bunch more in the bag for this lad during Lyons’ annual Easter Egg Hunt.