Skip to content
June 24, 2022/Comments Off on Mayoral race comes to Archer

Southwest Side civic and business leaders last Saturday got an early glimpse of the 2023 mayoral race, as 15th Ward Ald. Raymond Lopez made a campaign stop on Archer Avenue. 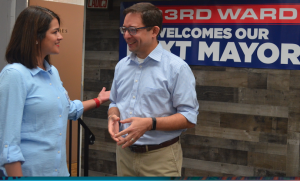 Lopez was the guest of honor at a “meet and greet” held at the Rhine VFW Post 2729. The event was organized by 23rd Ward Ald. Silvana Tabares, who introduced Lopez as her “friend and ally.”

“When you see what the mayor has done to the city and you see what the City Council has allowed her to do…the city’s heading in the wrong direction,” Lopez told the audience of several dozen leaders. “And what I hear from residents is that public safety and economic development are the most important issues here in the 23rd Ward.”

Lopez is a son of the Southwest Side. He attended the old St. Camillus School and then went on to St. Laurence High School.

His remarks last week were heavy on the issues of crime and economic development. With the audience including business owners and off-duty police officers and firefighters, Lopez’s opinions were met with applause a number of times.

He criticized Mayor Lori Lightfoot for what he called “despising the police.”

The alderman said that if elected, he would immediately fire CPD Supt. David Brown.

“But not just David Brown,” he added which generated another round of applause. “There’s a whole list of inadequate leadership [in CPD], mostly merit based, who have never done a day’s worth of work out on the streets, making decisions for the 10,000 other guys and gals who have to go out there and fight crime on a daily basis. They’ve got to go, too. Because we can’t just replace one goof with another. We have to do a clean sweep of leadership and we have to focus on promoting officers based on performance and not on merit.

“Simply because I know you, went drinking with you or I don’t like you shouldn’t be the determination on whether or not you become a sergeant, lieutenant or beyond,” he added. 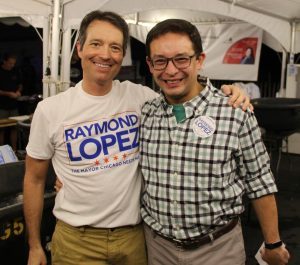 In response to a question, he briefly criticized Cook County State’s Attorney Kim Foxx, but steered the discussion back to Lightfoot.

“We know that right now the police department says that if I commit a crime and take off running, you can’t chase me on foot,” he said. “If I hop in my car, you can’t chase me in your car. All that does is tell criminals that you’re not going to get me. I can do what I want.

“It shows when you have a city where you have a 95 percent of not being arrested when you kill someone,” the alderman continued. “You have an 83 percent chance of not getting arrested if you commit petty crimes. Criminals know this. It has a reverberating effect from Archer Avenue to Avondale. All criminals know this. So the focus has to be from the City of Chicago’s perspective and as mayor my perspective to be able to enforce laws, allow my police to go after those magnets of violence and those individuals no amount of programs will ever change and to start arresting people and putting them where they belong.”

He also pledged to make it considerably easier to start a business in Chicago, as well as maintain a business, by eliminating the red tape many in the business community have complained about repeatedly.

Businesses, including and perhaps especially small businesses—the mom and pops—are an important part of this city’s backbone,” he said. “They pay taxes, they create jobs, they are a key part of prosperity, of the quality of life in Chicago. We need to support them in all ways possible.”