Skip to content
July 19, 2022/Comments Off on Quinn touts ‘get tough’ ordinance on reckless drivers 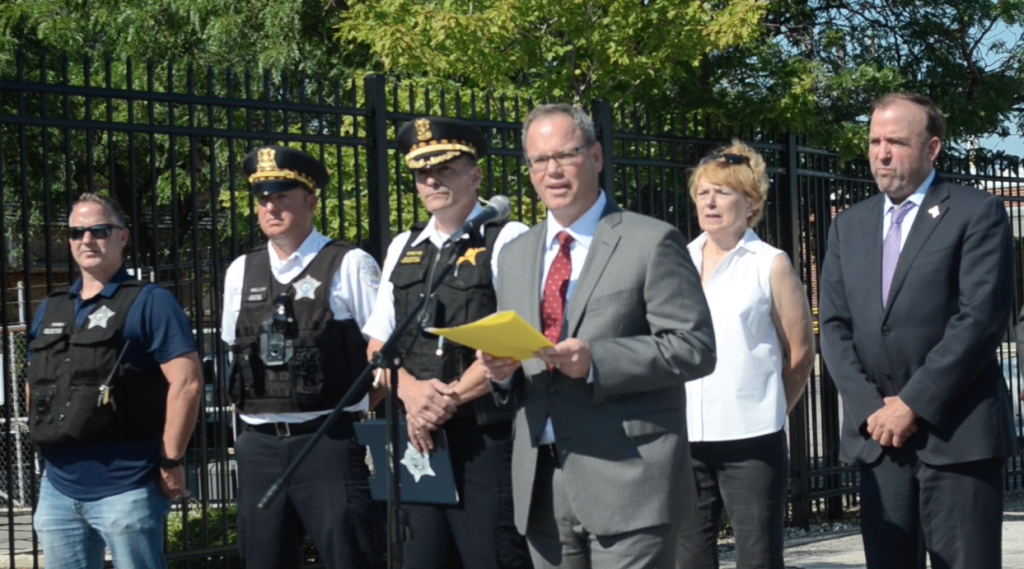 Thirteenth Ward Ald. Marty Quinn and a number of his City Council colleagues this week fired the latest salvo in the ongoing battle against those who use vehicles to engage in drag racing, drifting and other car stunts that create a public nuisance and hazard.

On Monday, Quinn joined several aldermen at an online meeting of the Committee on Pedestrian and Traffic Safety. 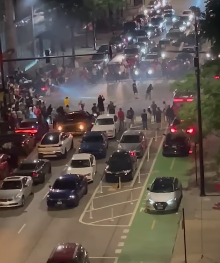 As many as a hundred drag racers, drifters and fans took over the intersection of Monroe and Clinton at 2 a.m. last Sunday. Police responding to citizen calls about the nuisance found themselves outnumbered, as reckless drivers and others threw lit fireworks at CPD units, forcing police to retreat. Southwest Siders have seen somewhat similar scenes, especially in Archer Heights and near Scottsdale. –Screenshot from a West Loop resident’s cellphone

They explained that under the revised ordinance, police will have the authority to track vehicles engaged in drag racing or drifting and then seize and impound them.

Forty-second Ward Ald. Brendan Reilly acknowledged that with CPD ranks stretched as thin as they are, police simply do not have the staffing required to confront a group of dozens—and sometimes hundreds—of young people gathered in a parking lot or on a public street.

He also said the city does not have a fleet of flatbed tow trucks that can be deployed rapidly to scenes where drag racing or drifting is occurring.

Under the new law, police will have the authority to capture images of offending vehicles and then at a later unspecified date, pay a visit to the home of the vehicle’s owner and seize the vehicle—regardless of who was driving at the time of the crime. The owner would then be responsible for all towing and impoundment fees, which can quickly run well into the hundreds of dollars.

“This [new ordinance] gives police the important tool they have been asking for,” Quinn told the Greater Southwest News-Herald. “We’ve found that fines and fees just aren’t cutting it with these lawless actors. We’re stepping up our game by giving police the go-ahead to seize and impound.” 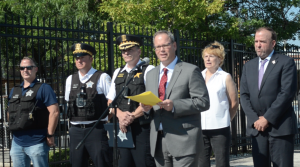 The event was held outside at the strip mall at 7050 S. Pulaski (built in 1977 as a Dominick’s and Walgreens), site of a large parking lot that until recently was wide open around the clock. Days after a 2 a.m. shooting there in May, Quinn rallied the mall’s owner, business tenants and others in the community to install barriers that effectively seal off the lot when the businesses close in the evening.

Under Quinn’s leadership, the site has essentially been eliminated as a gathering place for drivers who engage in drifting.

Generally supportive of efforts against reckless driving are leaders of the Archer Heights Civic Association and the Scottsdale Neighborhood Watch. Both AHCA President Thomas S. Baliga and SNW President Jason Huff noted their organizations have been pushing for police to impound drag racers’ and drifters’ vehicles for about two years.

The AHCA has been fighting reckless drivers along the Pulaski corridor, as well as along Cicero Avenue. The SNW is engaged in a similar fight, mostly at Scottsdale’s northern edge, where it borders Ford City, possibly the most popular Southwest Side hangout for reckless drivers.

“There’s nothing more important to these drag racers than their cars,” Baliga told the Greater Southwest News-Herald. “You take their car, now you have their attention. So the message must be clear: if you cause a public nuisance in a parking lot, if you endanger innocent people’s lives by driving recklessly on the streets of our communities, we’ll take your car.”

But exactly how it will work on the streets of the city remains to be seen, although it appears CPD will use photo and video evidence (mostly from police pod cameras and license-plate readers) to identify offending vehicles.

But with CPD staffing levels short at best and at crisis level at worst, questions remain about whether police simply have the resources to track down vehicles and see to it that they’re seized and impounded.

There also is the issue of vehicles owned by suburbanites and if CPD will have the authority, the time and the will to travel outside the city and seize vehicles.

Expressing a bit of skepticism about the new ordinance was 23rd Ward Ald. Silvana Tabares, herself a foe of reckless drivers.

“I’m proud to collaborate with the 8th District, the Archer Heights Civic Association and the Scottsdale Neighborhood Watch on cracking down on drag racers in our communities,” she told the Greater Southwest News-Herald. “But as we saw this past weekend when organized criminal caravans took downtown and police were wholly outnumbered and subjected to violence from the mob, criminals are emboldened like never before.

“I support Ald. Reilly’s [proposed ordinance], but until we address the real issue and have enough police who are empowered to enforce the laws, it’s just more words on paper,” she concluded.

Initially hopeful when he heard about the proposed ordinance, Baliga turned skeptical after he read it.

Saying he was “not impressed” by the draft, Baliga said the legislation in its current form “does nothing to help with the situation.

“[Reckless drivers] need to be punished right away, have their cars impounded at the scene, so word gets out quickly on social media that police are serious.”

He called the idea of taking photos now and tracking down cars later “absolutely nuts.”