Skip to content
July 20, 2022/Comments Off on Driving a bus not magical 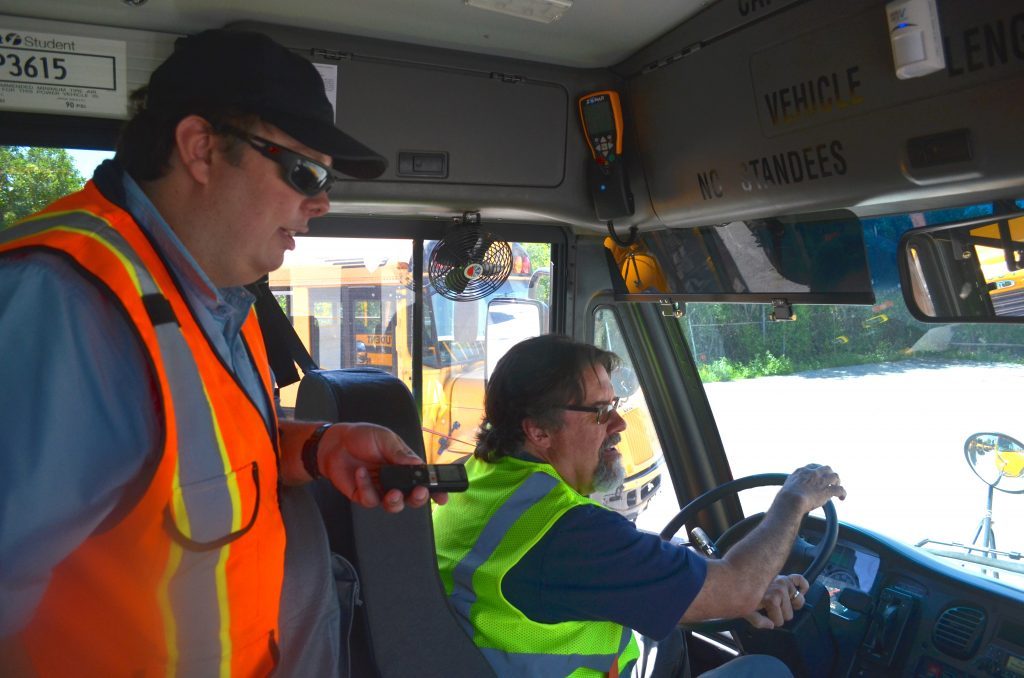 Driving a bus not magical

But it feels that way, I learned

En route to my debut driving a school bus, I got psyched up listening to “Magic Bus” by The Who.

“I don’t want to cause no fuss,” Roger Daltrey sang, “but can I buy your magic bus?”

Alas, I was not allowed to drive the bus on local streets. Something about needing a permit. 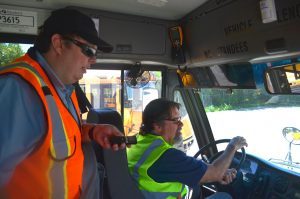 Yes, a bus is enormous.

Making a turn? Give yourself a wide berth. That’s easy in a parking lot.

I would need every minute of training – 13 classroom hours and 40 behind-the-wheel hours – to turn safely from Archer onto Narragansett, carting kids to Kennedy High School, for example

My instructor was First Student Field Supervisor Andrew Zanoni. He’s again driving buses, as the company is a handful of drivers short of the 160 it needs for its 200-bus fleet.

Zanoni, 26, wonders if there’s a shortage—a national shortage across the industry, in fact–because people don’t like the hours. I joked that it’s because their buses don’t have air conditioning. (Actually, a number of them do.)

Seriously, if you need information about a school bus, Zanoni knows them inside out.

“Always check your mirrors. That’s one of the things you get good at driving a bus,” he said. “People don’t realize that a lot of times, a bus will handle as good as your car once you get comfortable navigating with the size.”

I felt comfortable behind the wheel. Keep in mind, there is a 5 mph speed limit in the lot and no traffic.

There’s plenty to remember driving a bus. Like when I wanted to stop and drop off our photographer.

“Put the bus into neutral, please,” Zanoni said. “Use your left foot to push the parking brake pedal to the floor. The door switch is the red one to the right of the gear shift.”

Why do school bus drivers open the door at railroad crossings? To listen for trains. There’s a laundry list of things to do at a bus stop.

Zanoni later had me back into a diagonal parking space using the mirrors. No flinging my right arm over the car seat and turning my head around as I have for decades.

I parked inside the lines. Did not hit another bus. “Great job,” he said. Maybe I found a new gig.

Potential drivers are paid $15 per hour for 40 hours of training, he said. If they feel they need more, they can have more.

You are guaranteed two hours in the morning, two in the afternoon, even if your route takes less time. There’s a chance to make more money on side jobs.

Zanoni, who has never had an accident and has driven a bus 75 mph on a highway, later took me on a brief tour of La Grange. I marveled at his driving skills on narrow streets.

Two motorists honked at us. How dare we stop a school bus at a railroad crossing?

Even with jerks like that, Zanoni loves his job.

“The kids are usually really good,” he said. “If you lay out the rules on the first day, they’ll be angels the rest of the year.”