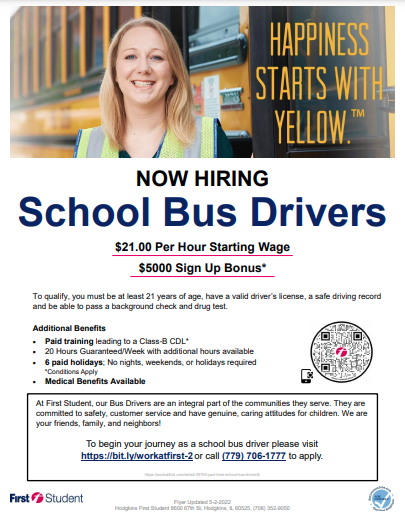 In a world where “Help Wanted” signs now outnumber “Wear a Mask” signs by about a thousand to one (or so it seems), employers across the board are scrambling to compete for prospective employees like never before.

Having a leg up on the competition are companies already known for good pay, flexible schedules and strong benefits—like First Student, widely known as one of North America’s leading school transportation providers in North America. Its yellow school buses are a fixture across the Chicago area. 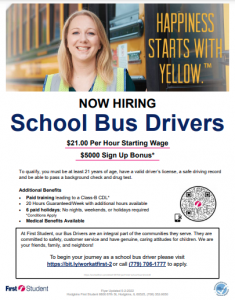 “This is a very good place to work, no doubt,” said Andrew Zanoni Field Supervisor and Recruiting Team Leader at First Student’s terminal in Hodgkins. “We draw people from different age groups and different positions in life. We have a workforce that is diverse, capable and motivated.”

Zanoni himself is an example. He started with the company in 2017 as a college student (majoring in industrial design) seeking a part-time gig while he was away from school.

One of those people is Chicago Lawn resident Rita Bencomo, 51, who has been driving school buses for 20 years—the last 13 with First Student.

“Years ago, I was a stay-at-home mom with four kids who took the bus to school,” she said. “I got to know one of the drivers on our route. She was a nice person. One day she asked me, ‘Why don’t you drive a school bus?’ I had not thought about it; but then I did, so I thought I’d try it.”

These days during school years, the grandmother of 10 most frequently runs routes for Argo Community High School and Lyons Township High School, as well as Jefferson Middle School.

“I like working for First Student,” she said. “Getting kids to and from school safely is important, and I’m proud that I’m a part of that.”

Tinley Park resident Rosa Lanagan, 32, was a 21-year-old working at Menards when she a First Student recruiting sign.

“At first, I thought, ‘Me? A school bus driver?’ But I guess I’m a little adventurous, so I said, ‘Bring it’ and my friend and I decided to give it a try.”

Years later, Lanagan has succeeded and worked her way up into a First Student supervisor’s spot—training prospective drivers and helping with recruitment.

“It’s worked out well,” she said. “As a driver, you typically handle a few hours in the morning; then you’re off and come back for a few hours after school.

“But there are a lot of options to get just about as many more hours as you want, with all the charters we run in the evenings and on weekends—everything from taking athletic teams and school clubs to games, to school field trips, to summer camps outside the Chicago area, everything,” she continued. “It’s technically part-time employment, but you have the opportunity to make it into more than that. And you’re not your own boss actually, but once you’re behind the wheel, you feel like it, and that’s a good feeling.”

Zanoni said First Student offers paid training at $15 an hour, but then $21 an hour once employment starts—with a $5,000 sign-up bonus. He said First Student’s Hodgkins facility boasts a fleet of well-maintained buses, many of which are new.

A limited number of jobs are open now for drivers, dispatchers and more. For more information, visit workatfirst.com and put your home ZIP code in the search engine.