‘National Night Out’ events set for next week

Hundreds and perhaps more than a thousand Southwest Side men, women and children are expected to take a public stand against crime at the Chicago Lawn (8th) Police District’s annual National Night Out Against Crime celebration, set for 6 p.m. Tuesday, Aug. 2 at West Lawn Park, 4233 W. 65th St. 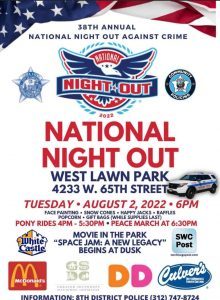 Year after year, it is one of Chicago’s largest and most successful NNO celebrations.

The event will include a prayer, remarks by police officials and elected representatives, a “peace parade” around the perimeter of the park at 6:30 p.m., and more. Special emphasis will be placed on thanking Chicago Police and others in law enforcement.

New this year are pony rides from 4 to 5:30 p.m. by Chicagoland Pony Rentals, a relatively new company owned by two young men from Garfield Ridge.

“The 8th [Police] District is big, and it includes a number of different neighborhoods,” said event founder and longtime coordinator Barb Ziegler, perhaps the most active and effective civilian crime fighter on the Southwest Side.

“But one thing all neighborhoods have in common is the desire to live in communities,” she continued. “This annual event is unique in that it welcomes, men, women and children from all across the district to recognize that common desire and to take action to make it happen.”

Ziegler said the event is “all about neighbors meeting neighbors—like-minded people making connections that can build stronger blocks, strong neighborhoods. It’s about learning to look out for each other, take care of each other and get actively involved in the community.”

Ziegler said people in every neighborhood in the district, including Clearing and Garfield Ridge, are welcome to attend.

She also was quick to credit the volunteers who staff the NNO event at West Lawn Park, year after year. “This would not be the success it is without them,” she said.

CPD’s mounted patrol and canine units will be on hand to give demonstrations, and there will be a number of giveaways for adults and children who live in the district, while supplies last. A color TV will be raffled off; those who march are eligible to win.

Cold drinks, snow cones, popcorn, hot dogs and other treats will be available to keep everyone cool.

Included in the goody bags for adults is potentially lifesaving information that includes basic tips on how to make an effective 911 call, how to escape domestic violence, how to join the local CAPS effort and more.

A number of local businesses, large and small, have made contributions to the NNO at West Lawn Park, now in its 21st year. Nationally, NNO is in its 39th year.

At dusk, the movie Space Jam 2: A New Legacy will be shown outside. All are welcome to bring blankets and lawn chairs.

For more information on the district-wide observance at West Lawn Park, call the CPD Eighth District CAPS Office at (312) 747-8724.

Launched in 1984, National Night Out is an annual community-building campaign that promotes police-community partnerships and neighborhood camaraderie to make neighborhoods safer, more caring places to live.

National Night Out is designed to enhance the relationship between neighbors and law enforcement while bringing back a true sense of community. It also provides a great opportunity to bring police and neighbors together under positive circumstances.

Millions of neighbors take part in National Night Out across thousands of communities from all 50 states, U.S. territories and military bases worldwide on the first Tuesday in August.

NNO in the Deering (9th) District

Southwest Siders living in the Deering (9th) Police District (which includes all or parts of Gage Park, Brighton Park, McKinley Park and Back of the Yards) are invited to celebrate NNO at Cornell Square Park, 1809 W. 50th St., from 5 to 8 p.m. Tuesday, Aug. 2.

The event is sponsored by the Chicago Police Department in concert with a handful of elected officials and community organizations like the Back of the Yards Neighborhood Council.

• In central and western Garfield Ridge (everything west of Central Avenue), members of the Garfield Ridge Neighborhood Watch plan to conduct a two-hour motorcade through the streets.

All are invited to join by getting in their car or other vehicle and heading over to the Weber’ Bakery parking lot, Archer and Nordica, for a 6 p.m. start.

Those who choose not to join the motorcade are asked by the GRNW to stand in front of their homes and give a hearty wave as the motorcade passes.

• In central and western Clearing (everything west of Central Avenue), members of the Clearing Night Force also plan to conduct a motorcade through the streets.

Immediately before the vehicles depart, there will be a brief prayer service at 62nd and Melvina, near the southeast corner of Hale School. The service will start at 6:30 p.m. at a monument dedicated to the memory of Carrie Hovel and Helena Martin, two Hale students who lost their lives in a gang-related shooting in late 1995.

Neighborhood outrage over the slayings led to the 1996 formation of the CNF, which today is the oldest continuously operating neighborhood watch group on the Southwest Side.

Those participating in the CNF motorcade are asked park their vehicles on 62nd Street, facing east from Merrimac. After the motorcade, light refreshments will be served at the Hale Park fieldhouse, 6258 W. 62nd St.

Those who choose not to join the motorcade are asked by the CNF to leave their porch lights on as a show of solidarity with police and each other.

• In the Scottsdale neighborhood, all are invited to take part in the Scottsdale Neighborhood Watch’s first-ever NNO celebration, set for 7:15 p.m. Tuesday, Aug. 2 in the parking lot of St. Bede Church, 83rd and Kostner. 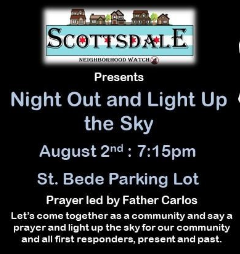 The brief event will begin will a prayer by the Rev. Carlos Arancibia, pastor, and will continue with the release of a limited number of sky lanterns that will be given away to each family or person.

By PETER HANCOCK Capitol News Illinois [email protected]apitolnewsillinois.com SPRINGFIELD – Gov. JB Pritzker this week asked the College Board for more information about its reasoning for changing the final framework of a new Advanced Placement course in African American studies after it had been criticized by Florida’s Republican Gov. Ron DeSantis. “Although we are pleased to…

By NIKA SCHOONOVER Capitol News Illinois [email protected]capitolnewsillinois.com SPRINGFIELD – Illinois schools are still grappling with a teacher shortage that seems to only be getting worse, a recent survey by the Illinois Association of Regional Superintendents of Schools shows. This mirrors the state’s own data, which shows Illinois’ teacher shortage is at the highest level in…