The main sign at the Scottsdale shopping center could in the months ahead sport a sign for a cannabis dispensary. --Supplied photo

Concern over dispensary in Scottsdale

Owners of a cannabis dispensary want to set up shop in the Scottsdale Shopping Center—a move some in the community are questioning and others are opposing.

“There’s a lot of concern out there,” said Scottsdale Neighborhood Watch President Jason Huff. “First, there’s concern about whether a dispensary is a good idea for that shopping center. Second, there’s concern and even anger about how this is being handled.”

The main sign at the Scottsdale shopping center could in the months ahead sport a sign for a cannabis dispensary. –Supplied photo

The issue concerns plans by Justice Cannabis Co. to set up shop in the shopping center, which runs on the east side of Cicero Avenue, from 79th Street to about 8200 south. The dispensary would be located at 7969 in an outlot storefront that until 2019 was home to Avenue, a clothier specializing in plus-size garments for women.

It came to light months ago and was discussed in what was said to be an occasionally contentious public meeting hosted by 18th Ward Ald. Derrick G. Curtis on July 14 at Rainey Park.

According to a statement on its website, Justice is a firm founded in 2014 by several civil-rights attorneys from the Loevy & Loevy practice “out of a desire to bring great quality cannabis products for everyone.” Loevy & Loevy is nationally known as a firm that has successfully fought wrongful convictions.

Justice is headquartered in the Chicago area and owns and operates about a dozen dispensaries in a handful of states. It also is a cannabis grower, and its products can be found at a number of dispensaries owned by other companies. The best known are the Ascend and Curaleaf dispensaries found across the Southwest Side and southwest suburbs.

According to a Justice spokesperson, the dispensary would not serve medical cannabis patients. Instead, it would be a recreational cannabis store open to all adults.

She added the dispensary anticipates having a staff of about 20 employees, mostly full-timers. Presumably, some of those jobs would be open to Scottsdale residents.

She also emphasized that Justice “meets and exceeds” government regulations for safety—adding that Justice “is committed to being a good neighbor.” 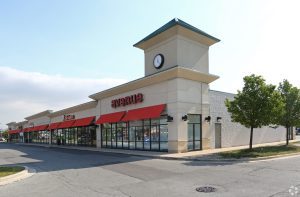 The Justice Cannabis Co. hopes to establish a recreational cannabis dispensary in a space at 7969 S. Cicero, a Scottsdale Shopping Center outlot once home to an Avenue clothing store. –Supplied photo

Before the July 14 meeting and since then, social media has occasionally been lit up with opinions from Scottsdale residents.

“Don’t we have enough problems in this neighborhood without adding a dope dealership?” asked Inez Salazar. “We still have the loud nightly noises coming from Ford City (drag racers and car drifters). We still have gang graffiti popping up constantly. We still have not nearly enough police out here. Let’s solve those problems first before we talk about a dispensary. I say nope to dope.”

“My concern is that this new dispensary may be located right near businesses where you find a lot of parents with young children,” added another woman who asked that her name be withheld. “What kind of customers will this new place attract? Who are they? Are they from this neighborhood?”

Barbara Odette said she opposes Justice’s plan “because of the traffic. Mabenka Restaurant [in Burbank] was just sold to a cannabis dispensary and it would be katty-corner to the one in Scottsdale with more parking.

“When you go to the dispensaries in suburbs on a weekend, there are lines outside and around the corner because only 15 people are allowed in at one time,” she continued. “Parking would be horrendous in the Scottsdale center because the store where they are hoping to put the dispensary has a limited parking area.”

A man who also asked that his name be withheld said he has no concerns about a dispensary opening doors in the community.

“Everything I see is positive,” he said. “A vacant store will now be occupied. Jobs will be created. The city will get tax revenue from sales there. The dispensary’s customers may spend their money at other stores in the shopping center, as well.

“And as anyone who’s ever been in a dispensary knows, they are usually safe, secure and clean,” he continued. “You even see grandmas and grandpas coming in and out. How anyone can oppose a dispensary but say nothing about liquor stores in the neighborhood is something I don’t understand.”

In an email to Justice’s representatives, Huff suggested a compromise: that the dispensary be located immediately east of Scottsdale, in the Ashburn neighborhood. He pointed to locations that include vacant stores near 79th and St. Louis, 79th and Southwest Highway, 87th and Kedzie, and anywhere along Kedzie.

He also said he does not like what appears to have been behind-the-scenes dealing for months between Justice, Curtis and shopping center representatives.

“I don’t like it when deals are done in private, and the community is only brought into the conversation at the last minute, after everything has been decided—and I know I’m not the only one who feels that way,” he said.

In an unscientific poll conducted by Huff in the SNW Facebook group, 76% of 210 people said they oppose situating a dispensary at the shopping center. Some 16% support the idea, and the remainder was undecided.

Huff also expressed dissatisfaction with Justice’s representatives for initially warming to the idea of appearing at a public meeting hosted by the SNW, but then shifting gears in favor of one hosted by Curtis, set for 6 to 8 p.m. Monday, Aug. 22 at Durkin Park School, 8445 S. Kolin.

Curtis’ flyer announcing the meeting does not name Justice, but instead says that he and other city officials will be on hand, as will a representative of Taft Law, a Loop firm specializing in commercial real estate.

In order to move forward, Justice needs a special-use permit from the city’s Zoning Board of Appeals. Aldermen typically have a great deal of influence over ZBA decisions.

In a phone conversation Monday night, Curtis told the Greater Southwest News-Herald he supports Justice’s plans, mostly because he wants to see the Scottsdale Shopping Center thrive as a major economic engine of the community.

In a time when a harsh economy and a growing transition to online shopping have caused great harm to brick-and-mortar retailers across the nation, Curtis said he wants to do what he can to bring new businesses to the 18th Ward, as well as maintain what is already in place.

“The mom-and-pop stores got swallowed by the big-box stores, and then a number of the big-box stores got swallowed by the online retailers [like Amazon],” he said. “These are challenging times, and we need to do all we can to attract retailers to keep our stores in business. And in the case of Scottsdale, I’d much rather see successful businesses and jobs on our side of Cicero Avenue, rather than in Burbank or Oak Lawn.”