March 30, 2012/Comments Off on Three Males Shot Along Rockwell St. 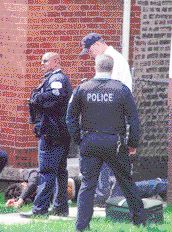 Three male teenagers were shot when violence broke out about 12:30 p.m. Tuesday in the Marquette Manor neighborhood, bringing police out in force to the area.

According to witnesses and police on the scene shortly after the shooting, the incident began on 70th Street, just east of Rockwell, where several shell casings were found.

One of the teens was found nearby, while another was found lying in front of a home in the 6900 block of Rockwell, and the third was found about a block away at 69th Street and Washtenaw Avenue. {{more}}

Officer Veejay Zala, a News Affairs spokesman, said Wednesday that details about exactly what happened were still sketchy, but a 19-year-old man who was shot in chest was taken in critical condition to Advocate Christ Medical Center in Oak Lawn. Two other teens, ages 19 and 16, suffered gunshot wounds to the arm, and were taken in good condition to nearby Holy Cross Hospital for treatment.

Zala said the shooting may be gang-related, but it is unclear because the three involved were not talking to police. ÒIt’s under investigation by Area South detectives,” he added.

Neighbors who live on the 6900 block of Rockwell expressed shock and disgust that the shooting would happen in broad daylight.

One of the women watching the police at work maintained that it may not be gang-related, just teens from different blocks warring with each other. ÒIf the police see these young guys hanging around in the middle of the day, they should be able to lock them up. They need to be in school,” said the woman, who did not want to give her name.

In addition to the police, the neighborhood where the shooting occurred is also patrolled by private security as part of Special Service Area 14. There are security cameras installed at various locations throughout the area, including one at 69th and Rockwell, but it was unclear on Wednesday if they recorded any of the shooting.