May 18, 2012/Comments Off on Soldier Field Is Site of Party For Advocate 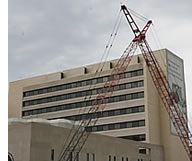 Soldier Field Is Site of Party For Advocate

A fundraising event was recently held on May 5 at Soldier Field to support the start of a modernization of Advocate Christ Medical Center, 4440 W. 95th St., Oak Lawn.

The modernization includes a $202 million, nine-story Outpatient Pavilion, which is already under construction.

Organizers indicate that the sold-out event, themed ÒMission Possible,” raised an estimated, record-breaking $1.5 million for the medical center’s building program in the form of ticket sales and sponsorships, including a $250,000 gift from Chicago-based Midwest Anesthesiologists, Ltd.

An additional $30,000 was generated during a live auction that featured tickets to the 2013 Super Bowl in New Orleans and VIP packages to the 2013 People’s Choice Awards in Los Angeles and Madonna’s sold-out concert in September at the United Center.

Wichter, chair of the neurology department at Christ Medical Center, co-medical director of its Neurosciences Institute and Salute’s Outstanding Physician Leader in 2012, mixed the humor into a speech that traced his road to becoming a neurologist and the decisions that brought him to Christ Medical Center more than three decades ago.

Heilmann, this year’s ÒOutstanding Community Leader,” brought tears to the eyes of many in the audience as he spoke about his own family’s experiences at Christ Medical Center and the compassion and dedication of the campus’ physicians and nurses who got his family through a recent, life-threatening illness.

Christine Dannhausen-Brun and Asta Razma served as event co-chairs for the second year in a row. Both women called their efforts rewarding because of the impact that the money will have on the medical center’s expansion efforts.

Meanwhile, plans for next year’s Salute are already underway. Information about this year’s gala and the 2013 event can be found at http://www.advocatehealth.com/salute.