February 27, 2014/Comments Off on Horror in Oak Lawn: House fire leads to discovery of multiple shooting victims, including 5-year-old boy 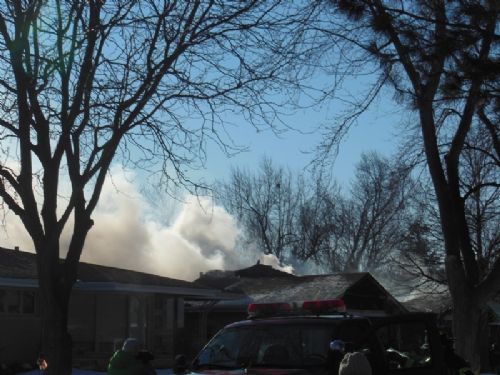 Four people were found dead after firefighters responded to a burning home in Oak Lawn early Wednesday morning in what appears to be a murder-suicide.

During a news conference late Wednesday afternoon, police said a 5-year-old boy was among those found dead in the home on the 9800 block of 51st Avenue. The Cook County medical examiner’s office said the others found dead were a 68-year-old woman, a 60-year-old man and a 36-year-old man.

The three adults were gunshot victims, according to authorities. It was not known on Wednesday if the boy was shot. Neighbors said an elderly couple and their adult son lived at the home.{{more}}

Officials at the news conference said they are not certain who the boy is or why he was there.

Police had not released the identities of the victims at press time.

ÒOf course, it’s tragic. The police and fire departments responded in a timely manner,” said Deetjen on Wednesday afternoon. ÒBut I just want to say to the people of Oak Lawn that this is an isolated situation. Oak Lawn residents need to know that. It is not weather-related. It’s a tragic situation that occurred in a very nice neighborhood.”

The fire reportedly began at about 5 a.m. Firefighters from Bridgeview, Summit and North Palos assisted Oak Lawn firefighters in putting out the fire. Fire department officials said the cause of the fire was arson.

According to reports, an off-duty Oak Lawn firefighter saw a man sitting in an SUV with the engine running in the garage. The garage door was open slightly at the time.

Moments later, the firefighter, who was entering the garage, heard a noise. When he opened the driver’s door of the SUV, he found the man dead from a gunshot wound, according to reports. Autopsies were scheduled to have taken place Thursday.

The tremendous impact of the fire led to the roof and floor collapsing, according to fire department officials.

The frigid winter temperatures at the time of the fire created havoc for the firefighters on the scene. A fire department official said that frozen hydrants posed a challenge initially.

Deetjen was asked about the tragic circumstances surrounding the fire.

ÒIt’s under investigation, but all signs do lead to a murder-suicide,” Deetjen said. ÒBut right now, we will let the police do their work. What more can I say? It’s very tragic.”

Michele Beattie contributed to this report.