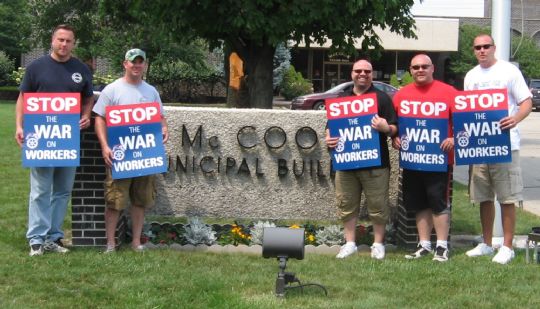 Less than five months after voters in McCook rejected a proposal to replace the village’s nine-man fire department with a fire protection district, the village this week laid off the firefighters and replaced them with firefighter/paramedics employed by Kurtz Ambulance Service.

“We were out as of 8 a.m. Monday,” said Frank Batura, chief steward of Teamsters Local 700, which represented the firefighters.

Batura said the firefighters had been notified by letter two months ago that the village was pursuing a contract with Kurtz, which is based in New Lenox.{{more}}

“They never bargained in good faith since the referendum was defeated,” said Batura. “They didn’t even consider our last proposal, which included a $15,000 pay cut and our giving up village health insurance.”

He said a severance package offered by the village was rejected in part because it contained a clause that the firefighters would not speak ill of the village or its elected officials “forever.”

“We were not about to give up our First Amendment rights,” he said.

Mayor Jeff Tobolski was on a family vacation in Michigan and unavailable for comment.

A spokesman for the village said the contract with Kurtz was approved at a special board meeting last week.

He said the three-year contract pays Kurtz $600,000 per year, which is a savings of about $600,000 per year. The village had budgeted about $1.2 million per year for its fire and ambulance service, he said.

“This was the appropriate approach on the heels of a budget deficit,” the spokesman said.

Laid off firefighters said Kurtz took 9 minutes to respond to its first ambulance call, to a home a block away from the fire station. They said the ambulance than got lost on its way to Loyola University Medical Center in Maywood and arrived 20 minutes later with the patient.

They also said the Kurtz ambulance was not certified to take patients to Loyola.

Kurtz officials at the firehouse declined to speak on Monday and did not return a phone call on Tuesday.

This is believed to be the first time Kurtz, which has been providing ambulance service to communities since 1977 and operates a funeral home in New Lenox, has supplied firefighters to replace village employees.

During a protest Monday afternoon in front of the municipal building, laid off firefighters gathered around a giant inflatable rat and yelled at the Kurtz employees as a fire truck pulled into the station.

Police were on hand but the situation never escalated beyond name calling.

After the proposal ended in a 56-56 tie in March, Tobolski said, “My job now is to mend fences and go back to the bargaining table with the firefighters,” he said. “We put forth a public question and the town said it wanted to keep a fire department.”

Tobolski said talks would resume with the firefighters union over a new contract.

Tobolski said the issues he cited before the referendum were still in play. McCook firefighters are not trained paramedics and cannot offer advanced life-saving treatment and the department is a huge cost to maintain.

“We still have a million dollars worth of payroll,” he said.

Tobolski said there were other ways to outsource fire services, such as an intergovernmental agreement with a fire protection district, he was not yet ready to go that route.