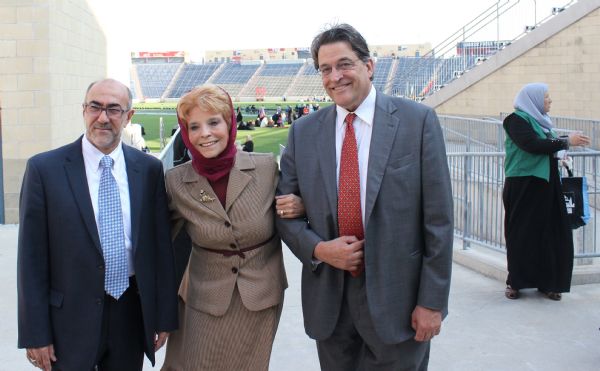 Illinois Comptroller Judy Baar Topinka, one of the state’s few Republican officials, died early Wednesday of complications from a stroke she suffered Tuesday, her chief of staff said. She was 70.

Ms. Topinka, one of the state’s most colorful and outspoken elected officials, was preparing to be inaugurated next month for her second four-year term as comptroller following a successful re-election in November.

Ms. Topinka, of Riverside, was taken to MacNeal Hospital in Berwyn on Tuesday morning after feeling discomfort. She was undergoing testing and observation when she lost consciousness early Wednesday, according to an official statement. She died about 1 a.m.

In a public career that spanned more than three decades, Ms. Topinka was known for an eclectic persona and a seemingly endless supply of coffee.{{more}}

In 2006, she became the state Republican Party’s first woman nominee for governor, but was defeated by Democratic Gov. Rod Blagojevich, who is now in prison for corruption. She made the bid for the state’s top post after serving as state treasurer for three terms, since 1994.

State officials were quick to comment on her passing.

ÒComptroller Topinka’s magnetic, one-of-a-kind personality brought a smile to everyone she met, and she had a servant’s heart, always only caring about what was best for the people of our state,” said Governor-elect Bruce Rauner.

Gov. Pat Quinn said in a statement that it is a sad day in Illinois.

ÒI am heartbroken to hear of the passing of my friend, Judy Baar Topinka,” Quinn said. ÒAs the first female treasurer of Illinois and a longtime public servant, Judy was a trailblazer in every sense of the word.

ÒNever without her signature sense of humor, Judy was a force of nature. She left her mark on the state she has called home her entire life. Her leadership improved Illinois and paved the way for countless women in politics.

ÒShe was a great leader and a straight shooter who served Illinois with dignity. This is a sad day for Illinois and for me personally. She will be dearly missed,” White said in a statement.

ÒShe was loved and will always be remembered because she was outspoken, independent and completely dedicated to the state,” Cullerton said. ÒHer fierce advocacy and bipartisan leadership as a legislator and constitutional officer will continue to be a model for women and men entering public service in Illinois.”

House Speaker Mike Madigan said: ÒJudy Baar Topinka brought a special approach to every aspect of life. Illinois is a much better place because of her efforts.”