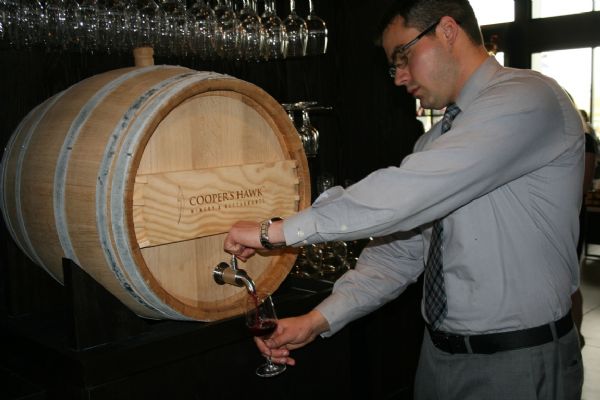 Local officials were among the invited guests at the Òuncorking” to mark the opening of Cooper’s Hawk Winery and Restaurant at 4830 W. 111th St. in Oak Lawn on May 16.

The doors opened to the public on Monday at the new restaurant, the 19th Cooper’s Hawk. The Orland Park location was the first, and is still going strong since opening in 2005.

ÒThis development has been a dream of many administrations, not just my own,” said Bury. ÒIt is a gateway of Oak Lawn. It speaks to the spirit of our residents,” she added. {{more}}

Cooper’s Hawk will be a cornerstone of the development, along with Mariano’s grocery store across the parking lot.

While there have been disagreements among board members about some of the businesses in the redeveloped retail strip, they all agree that upscale Cooper’s Hawk is a welcome addition.

ÒIt’s definitely one of those businesses that will be good for Oak Lawn,” said Streit prior to the uncorking, as he and his wife, Linda, perused the tasting room and gift store. The store includes an array of wine-related items, as well as freshly made and hand-dipped chocolate candies.

Asked jokingly about visiting the competition, Desmond, the owner of Jack Desmond’s bar and restaurant in Chicago Ridge, laughed, saying, Òthis is a different level.”

ÒThis has to be the most pleasurable opening of all the restaurants,” said founder and CEO Tim McEnery. ÒEveryone has been so welcoming since the day we started.”

Mike O’Brien, the general manager of the new location, agreed. ÒWe’ve been so well-received and I hope it is something that people are waiting for,” he said during a press event at the restaurant last Friday.

Growing quickly from their start in Orland Park, Cooper’s Hawk restaurants and wineries have sprouted up around the country.

There is seating for about 300 in the new location, which includes a patio area with a fireplace looking onto a fountain on the property.

Wine tastings are expected to be a popular attraction, as they are elsewhere.

O’Brien noted that while some of the wine served at the restaurant comes fresh from the casks on display, the winery is actually located in Countryside.

ÒWe don’t have our own vineyards, so we can get our grapes from the best possible sources,” he said, noting that the winemaker produces a newly released wine each month, which members of the Wine Club receive.

More information about Cooper’s Hawk, including renting the facility for private parties, may be obtained at www.coopershawkwinery.com.