Skip to content
March 1, 2017/Comments Off on Crowd blasts Trump policies as 75 people rally at Lipinski’s office on Archer 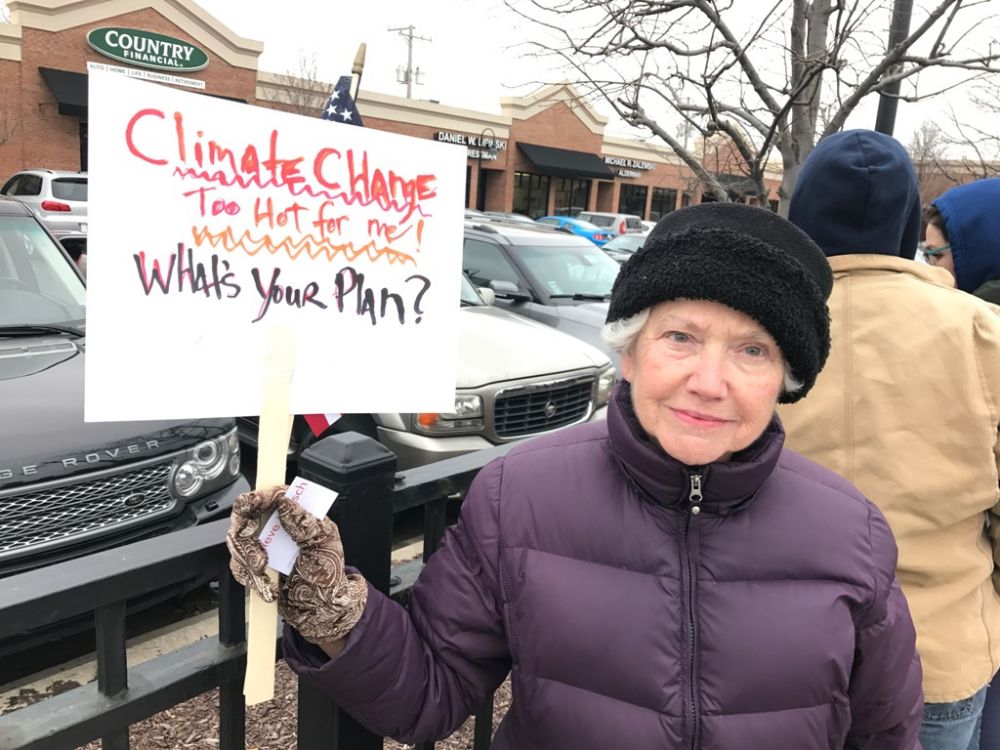 About 75 people braved cold winds last Thursday on Archer Avenue, outside the office of U.S. Rep. Dan Lipinski, to protest the Trump administration and its various policies. And members of the Indivisible Chicago group also had some issues with Lipinski.

They had hoped to meet with the congressman, but he had a prior commitment, his Chief of Staff Jerry Hurckes told several member of the group who gathered in the district’s office lobby.

Group member Sue Joseph, of Riverside, said that she hoped members of Indivisible Chicago could meet with Lipinski at a future date. Hurckes said he’d meet with the group and added that Lipinski may also.

Although some were critical of Lipinski’s longtime stance as a pro-life Democrat, they did share some common ground regarding Trump.

ÒHe believes we should keep a tight watch on the Russia issue with Donald Trump. He believes (Trump’s) tax returns should be given to the public. Most of the things he agrees with you on,” Hurckes said.{{more}}

ÒHe believes the public education program should exist how it is, maybe even enhance it with more money,” Hurckes said. ÒThere are some issues they won’t agree upon. Congressman Lipinski is not a waffler.”

The rally, held on the sidewalk outside his Southwest Side office at 6245 S. Archer Ave., drew people from throughout the congressional district. Many different issues were represented.

Mary Pranteau, 80, of Berwyn, said she came out to oppose Trump’s restrictive policies on immigration and share concerns for the environment.

ÒI’m really upset about how things are changing. I need to focus on two things that are important to me. One is the concern of immigration, and the rights of people who are here. I live in a community where a lot of people are immigrants. I’m going to try to work for Berwyn to become a sanctuary city,” Pranteau said.

She is also concerned about our warming world.

ÒLook, I’m 80. I’m worried about my kids and my grandchildren, so my focus is what are we doing about climate change. I know it’s not be as urgent as some other things people are concerned about here, but I feel it is very urgent,” Pranteau said.

She works with Citizens Climate Lobby on environment issues. Immigration, she said, is a big issue Òbecause we’ve used to our advantage people coming to our country, Who’s working in the dairy industry, the meat packing industry, farming the fields? Are they really taking our jobs? I don’t know.”

Trump’s stance against Muslim immigrants from certain countries Òis not right,” she said.

ÒThat’s not my America and I’m feeling ashamed of the people in Washington who are representing us,” Pranteau said.

Peggy Ellis, of La Grange, said she thought the rally was supposed to be a town hall meeting. ÒI was kind of disappointed,” she said.

ÒMy biggest issues are education because I was a special ed teacher for 20 years. I don’t believe states are going to manage that very well. And I’m really concerned about the environment and, obviously, civil rights,” Ellis said.

Indivisible Chicago spokesman Jim Longino said the group Òcame together throughout the suburbs, a natural progression.” On Feb. 23, rallies were held at five other congressional district offices including U.S. Bobby Rush’s office at 11750 S. Western Ave., in the Morgan Park community.

ÒI never thought being kind and nice to people would be considered radical,” Longino, of La Grange, said. ÒWe’re trying to figure out how best to stop this atrocious rollback of what our grandparents fought for 100 years ago. The list goes on and on. We’re not being radical, we’re trying to show Dan Lipinski that he represents everybody.”

Some passing motorists honked their horns in support of the group.

A former Chicago Public Schools teacher, Wilma Asis-McNelis, brought her three young children from their Garfield Ridge home to the rally. Her concern is federal funding for public education.

Being an immigrant herself, she said her parents Òwaited 20 years to come here legally from the Philippines. A very long time. But I can understand the desperation of some people,” Asis-McNelis, 39, added.