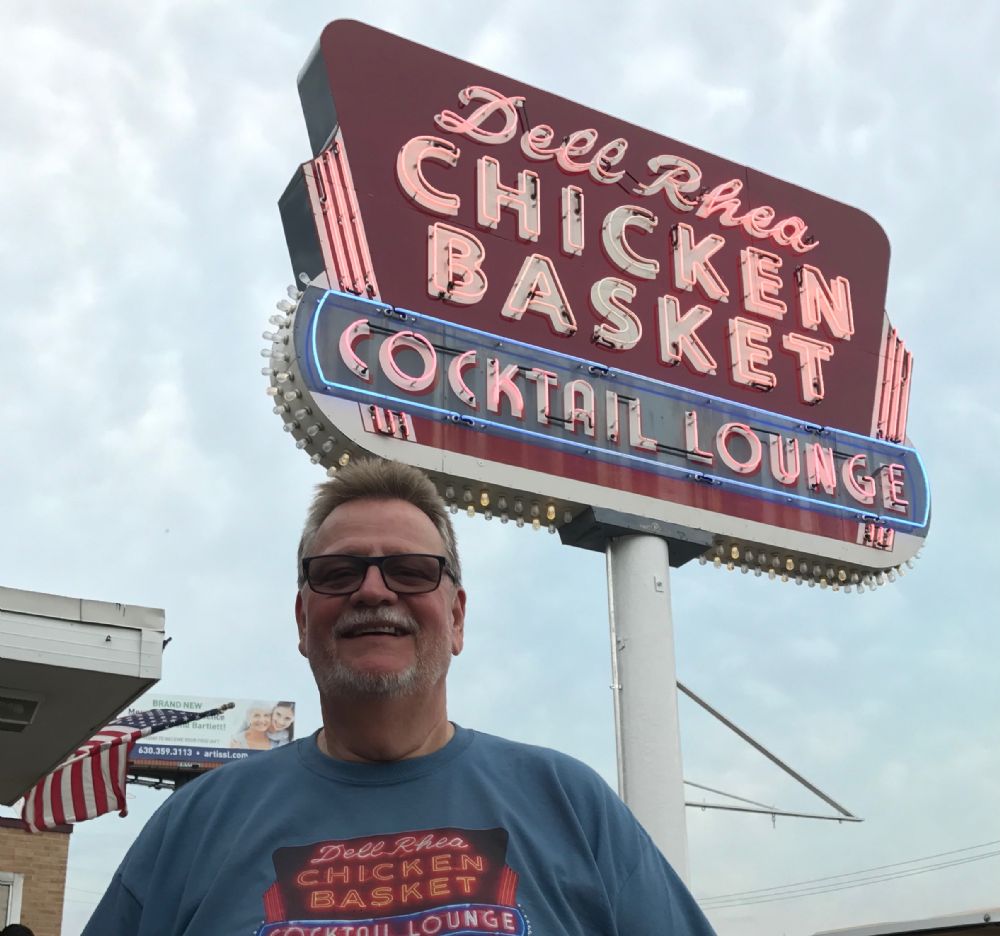 Like any business, you must tout the product. And the neon sign did just that, drawing the attention of countless passers-by.{{more}}

And now it looks brand new after David Hutson spent two months restoring the sign, peeling at least five layers of paint off the original porcelain. The electronics are all new inside, too.

ÒThis is how it looked in 1946. I’m ecstatic. Today has been a warm, special day. I know my parents are watching,” Rhea said of the late Grace and Dell.

James Thole, head of the Neon Heritage Preservation Committee of the Route 66 Association of Missouri, wrote the grant proposal that netted half the $35,000 renovation cost. The grant came from the National Park Service’s Route 66 Corridor Preservation Program.

ÒThere was the paint, but the real problem was the insides, which had been compromised. They used bandages and bubble gum to keep it running,” Thole said.

To celebrate the renovated iconic sign that’s stood along historic Route 66, Rhea hosted a car show and party in the parking lot Monday. Dozens of lovingly restored and shiny vehicles were there.

Jim Cornelison, who belts out the National Anthem before each Blackhawks home game, did the same before the sign was re-lit at 4:30 p.m.

ÒIt’s the first time I’ve done a sign,” Cornelison said with a laugh.

ÒI do close to 200 events a year, counting the Blackhawk games.

ÒNot only is it the best chicken in the world, it’s the best people in the world,” frequent customer Peterik said. ÒBy the way, are you serving chicken today? Well, I need to bring my wife some. I need two boxes.”

What compels a rocker, a well-known National Anthem singer, a car show and a couple hundred people to come out for a sign?

It’s a big deal when a restaurant as famous as Dell Rhea’s Chicken Basket, renovates a sign that has beckoned travelers for 71 years, first along Route 66, the nation’s legendary ÒMother Road” that stretches from Chicago to Los Angeles, and now from nearby Interstate 55.

The restaurant and sign Òmean a lot,” Thole said. ÒThese are the vintage businesses, the vintage signs that made Route 66 what it was back then. Restoring these signs and places maintains the authenticity of the route.”

Back in the day, there was a light outside the restaurant. If someone inside needed a ride on the Bluebird Bus Line after enjoying a meal, staff would turn on a red light so the bus would stop for them, Patrick Rhea said.

The road has an undeniable attraction that compels folks to ride the length, said Thole, who has driven what remains of Route 66 over the years.

Heck, even Sir Paul McCartney and wife Nancy Shevell rented a car and drove from Chicago to Los Angeles on the iconic Route 66 back in 2008, surprising many a diner at stops along the way.

There was the ÒRoute 66″ TV series in the 1960s, a series filled with drama and plenty of automobiles. And you’ve probably heard the song that tells you where to get your kicks.

So, it’s fitting a couple of dozen cars were on display Monday. Sandy and Richard Parrish, of Plainfield, new devotees of the chicken basket, checked out cars after their lunch.

ÒI’ve seen the sign for years and we met some friends here for dinner two weeks ago,” Sandy said. ÒIt’s the best chicken.”

Purists may note the original sign read ÒNationally Famous.” That was replaced with ÒDell Rhea” after Patrick’s father bought the restaurant. That’s okay, Thole said, noting the family has owned the chicken basket 54 years Òand can have whatever they want on the sign.”

But it is called Dell Rhea’s Chicken Basket, not Dell Rhea.

ÒI don’t know if that was a mistake on the sign maker’s part or what,” Patrick Rhea said. ÒI was 9 years old at the time.”