January 11, 2018/Comments Off on Fundraiser held to help family of injured firefighter 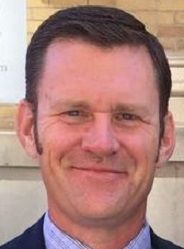 Sanders was injured on Dec. 27 when the Roberts Park Fire Department answered a call to put out a fire at a home in the 8800 block of West Fawn Trail in Justice. According to published reports, the fire began downstairs and spread upstairs.

Sanders, 44, was transported to the Loyola University Medical Center in Maywood with smoke inhalation and burns to his hands and face, according to a hospital spokeswoman.

A hospital spokeswoman said that Sanders, a Hickory Hills resident who is married and has two children, should make a full recovery.

ÒClint is a very dedicated to his profession and is a great family man,” said Roberts Park Fire Chief Jeff Ketchen, who attended a fundraiser Sunday afternoon at the Roberts Roadhouse in Hickory Hills to assist the family with expenses. ÒWe had a great community effort. The place was filled to capacity.”

Ketchen has worked with Sanders for 24 years. The fire chief said that Sanders was a positive influence on the fire department and his hard work and dedication was well known among firefighters.

The fire was extinguished in about 10 minutes and is still under investigation.

Ketchen said that it was too early to tell how much money was raised at the Roberts Roadhouse event. Guests began to file in early Sunday afternoon and took part in a variety of raffles while socializing and watching a Blackhawks game.

Rhett Golema is a member of the Roberts Park Fire Department and has worked with Sanders for over 21 years. He made the first donation, of $500, to the Go Fund Me account.

ÒHe is just a phenomenal person,” said Golema, a Palos Hills native. ÒI trust him with my life.”

Goleman agreed with Ketchen and others who attended the fundraiser Sunday that it was a large turnout.

ÒIt was pretty awesome,” Golema added. ÒI should mention that this (fundraiser) was formed by family and friends who are not part of the fire department. They did a great job organizing this.”

Golema said that the firefighters will hold a benefit for Sanders at a later date. Golema added that Sanders is improving but will remain hospitalized for a while.

ÒHe is a stand-up guy and a great firefighter,” added Golema.

Sanders’ sister-in-law, Charlotte Johnson Sanders, also attended the fundraiser and was overwhelmed by the response. She posted on Facebook that Òwe are so humbled for the love and support you all have for our family. The amount of people who came out today was unbelievable.”

The money raised will assist in paying the mortgage and help with the tuition for Sanders’ children. The funds will go his wife, Sheila, to assist with these expenses while Sanders recovers from his injuries.

ÒI personally want to thank the whole community for the outpouring of support,” Ketchen said.