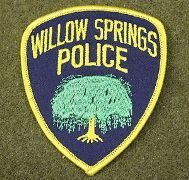 A recent threat at Willow Springs School was discussed at last week’s village board meeting when resident Carol Valdez asked Mayor John Carpino about the incident.

Carpino said he was unaware of any school threat, but Police Chief Sam Pulia had the answer.

“There was a student,” Pulia said. “He passed along an email he received from somebody else that ended up being circulated. The Cook County Sheriff’s police department handled the whole investigation. We were there in a supporting role.

“The child has since returned to Puerto Rico. He was not in school that day. Allegedly, he passed a picture of somebody who had a picture of a firearm.”

The threat was investigated and found not to be credible, Pulia said.

Valdez also asked about the status of the Willowbrook property.

“It’s for sale,” Carpino said. “We have no involvement. They couldn’t raise the money.”

The Dance of Life Foundation in Burr Ridge had proposed an ambitious project to rebuild the ballroom, which was destroyed by fire. The plan included new venues that would turn the development into a major performing arts center.

In other action, the board agreed to renew participation in the West Cook County solid waste agency regional disposal project.

Village Administrator Brent Woods explained, “West Cook is the agency that takes the deposit of all of our solid waste. Groot picks it up and takes it to the transfer station.”

Human resource services for the village will be now handled by Aureon HR.

“They’ll take over our payroll,” Woods said. “They’ll take over performing our employee assistance program. That’s all covered in the cost of the contract. The contract is for just under $26,000 per year. They assume liability for any employee related matter, such as EEOC complaints, sexual harassment complaints. This will reduce our insurance premiums. We will not have to spend an additional $5,000 on employee assistance program.”

Woods also noted the village will begin the process to tackle abandoned homes.

“There are several criteria that have to be met before we can intervene. We identified three homes we can address right now. We’ve identified several other homes we will be monitoring for compliance with our maintenance code.”

The police department has acquired new body cameras and Tasers.

Pulia said, “We’ll be developing policies for the camera use. We’ll also be developing a sex assault protocol policy. We learned about this at training in Springfield. If a young lady, or man, comes in

for a sexual assault, even if it happened in another venue, we are obligated to take a report and give the information to that municipality.”