December 7, 2018/Comments Off on No injuries in car crash into Regional and Reporter news offices 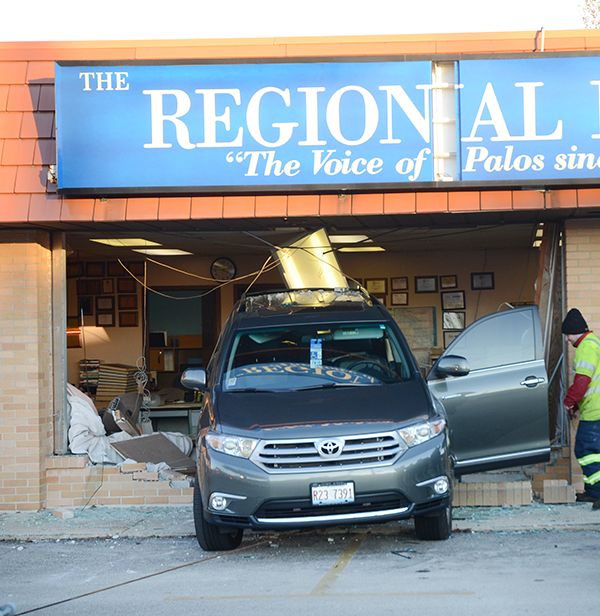 No injuries in car crash into Regional and Reporter news offices

A vehicle crashed into the Southwest Regional Publishing offices Thursday afternoon, causing substantial damage to the newsroom but resulting in no injuries.Ê Ê Ê

Southwest Regional Publishing produces The Regional News and The Reporter, weekly suburban papers that are sister publications to the Southwest News-Herald.

The Toyota Highlander SUV plowed in reverse through two of the Regional’s 6×8-feet plate glass windows facing Harlem Avenue at approximately 3:25 p.m., destroying a masonry support column and rendering that portion of the building uninhabitable.

“The noise and the violence of the crash were astounding,” said Anthony Caciopo, editor of The Regional News. “It looked and sounded like an explosion.”

Caciopo watched it happen no more than 10 feet in front of him as he worked at his desk at 12243 S. Harlem, Palos Heights. The impact tossed aside furniture, equipment and file cabinets. A portion of the ceiling collapsed, leaving a heavy light fixture dangling.

The car narrowly missed reporter Dermot Connolly, whose back was to the scene.

“I heard a smashing sound behind me and jumped up and ran across the room,” he said. “I couldn’t believe how close it came to where I was sitting.”

When the vehicle came to rest, its rear portion extended approximately four feet into the building, pointed upward at a slight angle.

Two other employees said, “It sounded like a bomb went off.”

According to police, the 72-year-old driver mistook the accelerator for the brake when leaving an angled parking space just north of the Regional building.

She had reportedly just walked out of a neighboring hair salon, got in her vehicle and attempted to back out of the parking space, while turning her wheels. That’s when she apparently hit the accelerator and the vehicle curved around in reverse before crashing into the building.

The Palos Park woman, whose name is not being revealed in this article, was attended to by personnel from the Palos Heights Fire Department and Police Department but declined treatment.

Hanging from the rearview mirror of her vehicle was a blue-and-white handicapped placard.

“We will publish on time and on schedule,” said Mark Hornung, chief operating officer of Southwest Regional Publishing, which produces The Regional News and The Reporter from the Harlem Avenue office.

“What happened on Thursday is sad but not a tragedy. Property was damaged but thankfully no one was hurt.

You don’t need a stadium to play ball,” Hornung said. “We are here for our readers and advertisers,” he said.

While repairs are being made, a makeshift newsroom will operate in the advertising department. The finance department will temporarily move to the company’s satellite office in Summit, 7676 W. 63rd St.

“And the publisher’s office will be done out of his car,” said Hornung.