Skip to content
March 17, 2020/Comments Off on Illinoisans vote in primary election amid coronavirus pandemic 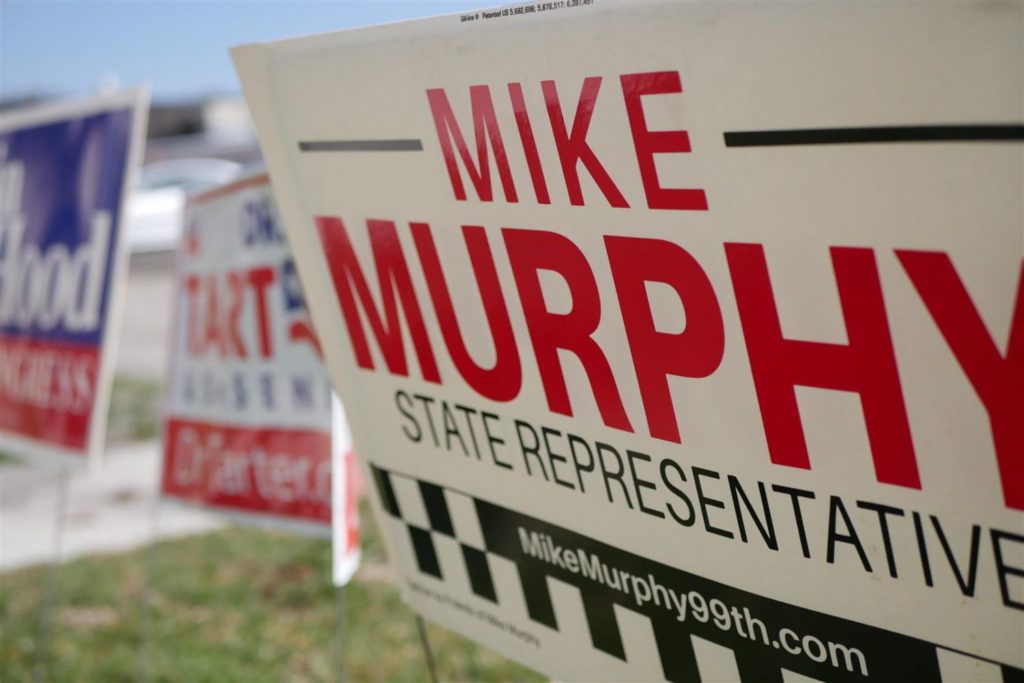 But it did not stop democracy.

People across the state went to the polls Tuesday to vote in a primary election in which the daily spread of the novel coronavirus seemed to overshadow the candidates.

“It’s still your public duty to go vote, regardless of an outbreak,” said Chris, a Springfield voter, as he exited his polling place Tuesday morning.

The traditional “I Voted” stickers were accompanied by disinfectant wipes and hand sanitizer. Some poll workers wore surgical gloves and facemasks.

“I used the sanitizer. I grabbed a wipe, I put it around the pen,” said Sharon, a Springfield voter. “I’ve gone to the grocery store, I mean, I can come here.”

Matt Dietrich, spokesperson for the Illinois State Board of Elections, said federal and state social distancing guidelines were satisfied thanks to added health precautions and lower voter turnout, which is not uncommon during primary elections

“We believed that the voting process in a primary election was roughly analogous to a restaurant takeout transaction, or rather visiting a grocery store,” he said.

Chris, the Springfield voter, said voting in Tuesday’s primary felt the “same as voting any other day.”

Election officials across the state had been frantically preparing in the days and hours leading up to polls opening. Hundreds of polling places had to be moved from nursing homes and other locations that might have posed a public health risk.

“They still had companies that were trucking equipment away from the original polling place site to the new site trying to get them set up to open this morning,” he said. “They had about 10 percent of their polling places that had to open late because they weren’t ready.”

Election judges also dropped out because of coronavirus concerns. Sangamon County Clerk Don Gray said he had to replace 135 of the county’s 540 election judges, including “another 25 to 30” before polls opened at 6 a.m.

“I’m proud to report Sangamon County opened all of its neighborhood polling places on time and adequately staffed,” Gray said.

Counties across the state anticipate unease around the COVID-19 outbreak will lead to lower in-person turnout.

“It’s a little slower, which we anticipated,” one poll worker in Springfield said Tuesday morning, adding, that her location still had a “steady stream” of voters.

“This certainly will not become what we traditionally see in voter turnout for a gold-standard presidential primary,” Gray said. “But it’s more than what I anticipated we could be at in this unique situation that we’re dealing with.”

Clerk Jonathan McLean from rural Monroe County in southern Illinois reported “very low” turnout Tuesday afternoon and predicted only 20 to 25 percent of voters casting a ballot by the end of the night.

“The coronavirus concerns are keeping people at home,” McLean said in a statement.

Sparse in-person voting might not mean low turnout overall, however, since people had the option to vote early or by mail.

As of mid-afternoon Tuesday, Dietrich said Illinois counties sent out more than 296,000 mail ballots. That number was nearly half – 162,000 – at the same time in 2016, the most recent year with a presidential primary.

“We should easily double the number of vote-by-mail ballots that we saw in 2016 this year,” Dietrich said.

He added that a mailed ballot may be counted up to two weeks after election day as long as it is postmarked by election day.

Voters could also cast their votes in person early, up to 40 days before election day. Many counties extended their early voting hours.

Dietrich said 600,000 early votes have already been cast in Illinois, compared to 425,000 in 2016. The official early vote count for that primary was 520,000, and Dietrich predicts this election’s figures to rise as well.

Officials expected an increase in early and mail voting anyway as voters like the convenience, Dietrich said, but this election’s sharp increase is “absolutely” due to coronavirus.

Robust alternatives to showing up on election day might not fill every gap left by low in-person turnout, though. DuPage County in suburban Chicago reported just a 14 percent total turnout as of noon.

Gray, too, expects a lower-than-normal final turnout for Sangamon County.

“I hope to be more surprised,” he said.

Governor JB Pritzker assured Illinoisans on Tuesday that the votes they cast will be safe.

“For any campaign that tries to claim that these elections results are somehow illegitimate,” Pritzker said, “you need to get your priorities straight.”

During a phone call with reporters Tuesday morning, Jim Allen, spokesperson for the Chicago Board of Election Commissioners, said the board asked Pritzker to postpone Tuesday’s primary in favor of an entirely mail-in election.

“There is nothing magical about March 17 unless you are St. Patrick,” he said.

“There is no system for doing that in Illinois because there is local control of elections,” Dietrich said.

“They could not even begin to explain the legal basis for their request,” Pritzker said at a daily COVID-19 briefing Tuesday. “Nor could they explain how they believed that they and election authorities across the state could effectively convert the election to all vote-by-mail.”

Pritzker said his office offered plain-clothes soldiers from the Illinois Army National Guard to help staff Chicago’s elections, but the city board did not accept them and also turned away 2,000 other volunteers “because the board wouldn’t reduce red tape.”

Dietrich said Allen’s comments Tuesday morning were the first he heard of changing the election.

“We were not included in any discussions like that,” Dietrich said.

Allen did not respond to a Capitol News Illinois request for further comment.

Despite low expected in-person turnout, Chicago broke its World War II-era record for requested mail-in ballots, with 118,000. And by Sunday the city had already broken its record for early voting.

“Had Illinois wanted to postpone the election, it would have taken similar action,” Dietrich said.

Arizona and Florida also held primaries on Tuesday. Both had in-person voting.

For those with general COVID-19 questions, the Department of Public Health maintains a hotline at 1-800-889-3931 and an email address ([email protected]).