Skip to content
March 18, 2020/Comments Off on Mixed bag for machine Dems 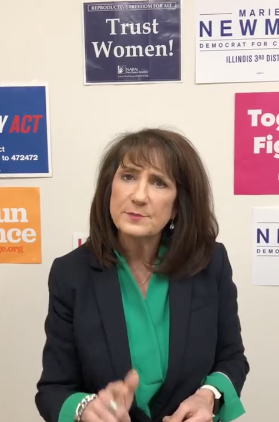 Lipinski, Burke go down to defeat

Two high-profile Democratic machine incumbents appeared headed to defeat late Tuesday night.
U.S. Rep. Dan Lipinski (D-3rd) trailed challenger Marie Newman; and though the congressman led in city precincts, his margin of victory was not enough to match Newman’s margins in suburban Cook and Will counties.
Late Tuesday, Newman unilaterally declared victory in the absence of a concession by Lipinski, who cautiously held out hope that late vote tallies could bring him victory.
The district is primarily in Cook County, with 257 precincts; but includes 43 in Will County and two precincts in DuPage County, as well. According to the latest unofficial results from the election boards, with only four Cook County precincts not counted, Newman tallied 30,787 (49%) to Lipinski’s 26,096 (42%). Other challengers Rush Darwish got 4,662 (7%), and Charles Hughes came in with 1,278 (2%).
More than anything, the raceÑa rematch of 2018Ñwas seen as a referendum on abortion. Newman attracted heavy pro-choice resources locally and from across the nation. Lipinski is one of a dwindling number of high-profile pro-life Democrats in the country. Even Mayor Lori Lightfoot joined in a call last month to purge pro-lifers from the party, saying that people with Lipinski’s views on abortion have no place among Democrats.
In November’s general election, Newman will face Mike Fricilone, who defeated two others in the GOP primary.
In the 14th Ward, legendary Democratic committeeperson Edward M. Burke trailed challenger Aarn Ortz, a protg of U.S. Rep. Jess “Chuy” Garca (D-4th), long a Burke foe.. With almost all precincts reporting, Ortiz had 2,103 (40%) tallies to Burke’s 1,711 (33%)Ñwith challenger Alicia Elena Martinez bringing up the rear with 1,393 (27%).
Burke has served as 14th Ward Democratic committeeperson since 1968, and he won re-election as 14th Ward alderman last year; but his federal indictment on corruption charges since then may have been too much for most local Democrats to overlook.
Not only did Ortz appear to play David to a political Goliath, but he also hung onto his state representative seat in the 1st District on Tuesday, defeating Martinez 5,814 (58%) to 4,183 (42%), with almost all precincts reporting.
There is no Republican candidate in the district.
In the 2nd District, Democratic State Rep. Theresa Mah defeated two challengers handily. With almost all precincts reporting, MahÑbacked by GarcaÑdefeated her nearest challenger, Bobby Martinez Olson (said to have had Burke’s backing) 8,160 (67%) to 3,526 (29%). Independent candidate Kenneth Kozlar brought up the rear with 554 (4%).
Elsewhere on the Southwest Side, Burke allies rolled to victory.
In the 15th Ward, Democratic Committeeperson Raymond A. Lopez enjoyed a better than 2-1 margin over challenger Edgar Flores. With nearly all precincts reporting, Lopez was re-elected with 2,301 (67%) votes to 1,127 (33%) for Flores.
State Senator Antonio “Tony” Muoz (D-1st), a Burke protg, cruised to victory over challenger Froylan “Froy” Jimenez, 13,536 (62%) to 8,206 (38%).
There is no Republican candidate in the district.
Muoz also serves as Democratic committeeperson of the 12th Ward, where he held off a challenge by longtime rival Ald. George Cardenas for the party post, 1,974 (51%) to 1,897 (49%).

Elsewhere across the Southwest Side, Democratic incumbents coasted to victory.