Skip to content
April 17, 2020/Comments Off on Piety prevails 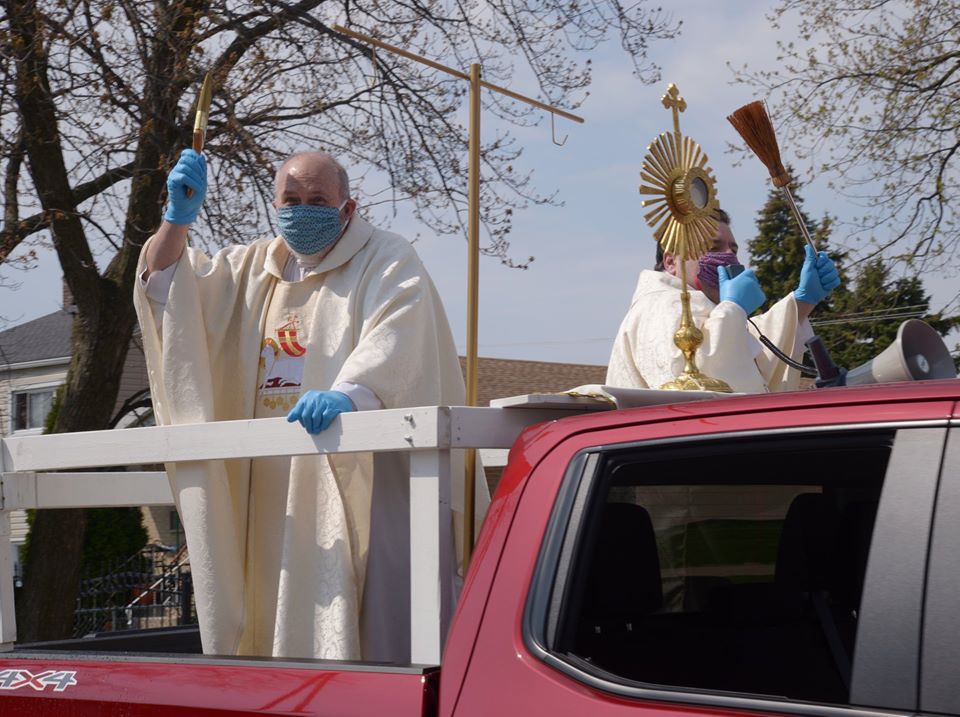 The world’s worst pandemic in a century failed to foil the faithful last week, as thousands of Southwest Siders observed the days most sacred to ChristiansÑthose that mark the suffering, death and resurrection of Jesus Christ.

The predominantly Roman Catholic part of the city appeared to simply switch from sanctuary to screen, as parish after parish live-streamed their Masses and even Eucharistic adoration on Facebook and YouTube.
A week before Easter Sunday, Cardinal Blase Cupich issued a Palm Sunday decree releasing Catholics from certain Holy Week obligations, most notably receiving Holy Communion and making the Sacrament of Reconciliation with a priest.
The delivery of religious services directly into people’s homes appeared to be welcome by those contacted by the Greater Southwest News-Herald.
“These live-streaming Masses have been like a godsend to me,” said Ashburn resident Mary McConologue. “I never miss Mass at church on Sunday; and while I’m so, so sad I can’t be at Mass in person, at least I have this.

“That matters especially to me because I’m elderly and live alone,” she continued. “In fact, I find myself tuning into more than one Mass. This is like a spiritual lifeline for me. It’s feeding my soul.”

McKinley Park resident Lupe Aguilar said it was unique “to participate in the Mass from our couch rather than a pew; but in a way, it seemed to give us a new meaningÑboth as a family of believers and as individuals. My husband, children and I held hands through the whole Mass. We have never done that before. It was moving.”
West Lawn resident Anna Santillan said she was “raised Catholic but haven’t been to a Mass in 20 years.” She accidentally found a live stream of a Eucharistic adoration–a Catholic service in which believers worship God as represented by a consecrated Communion wafer displayed in an ornate receptacle. (Catholics believe that the consecrated host is, in essence, the body of Christ.)
“In any other time, if I had stumbled across a Eucharistic adoration online or on TV, I would have flipped right past it without a second thought,” Santillan said. “I’ve haven’t been to a Eucharistic adoration since I was a little kid. But somehow, this time I felt drawn to it. The more I focused on [the host], the more I reflected on my life. I found myself praying and then crying. I had no idea how much I missed my relationship with God.
“Strange how it took a [worldwide pandemic] to bring me back home to God,” she continued. “When this stay-at-home thing is lifted, I plan to go back to church, to re-connect.”

A few Catholic priests took the Gospel to the streetsÑmost notably, the Rev. Stan Rataj, pastor of Our Lady of the Snows Parish in Vittum Park.

Armed with his faith and a consecrated host displayed for all to venerate, Rataj and Deacon Franco Foti stood in the bed of a pickup truck owned by parishioners (the Davila family) and shook sprays of holy water to Catholic at the curbs.
Escorted by a Chicago Police SUV, the pastor and deacon were part of a several-vehicle, two-hour procession that also included a statue of the Risen Christ in the lead car, driven by Miguel Licona.
“It is an awesome Easter!” Rataj said about his first-ever celebration of the day in the streets.
“I knew going into this project that we would not get to every block,” he continued. “Some of the funky, one-way streets around the park, cul-de-sacs and dead ends–combined with my horrible sense of direction–introduced the fallible human element into all this. That is why, I am resuming [the day after Easter], with the 5000 block of Lawler and the 4700 block of Keating! God is good! If we missed your block, shoot me a message, text or email. [The] Easter [season] lasts 50 days!”

Southwest Side Protestants appeared equally fervent in their Easter celebrations.

“This is a very unusual Easter Sunday,” said Mark Jobe, senior and founding pastor of New Life Community Church, which has about 25 locations across the city and suburbs, including Archer Heights and Brighton Park.
“We’re making history,” he continued in a video message to the faithful. “This is a unique time in which our country is going through a major crisis.”
He acknowledged that he knows people fighting for their lives due to coronavirus infectionÑa few of whom have died.
“But we will not dampen down our celebration of the resurrection Jesus the Christ, the son of the living God,” he continued as he encouraged New Life members to use the crisis to draw others closer to God by evangelizingÑencouraging them to go online and watch New Life services.
“We’re praying that thousands of people that normally don’t go to church or are disconnected will actually hear the message of hope in Jesus Christ.”
Seeing a connection with biblical times was Omar Lindley, pastor of Transformation Church International, 7711 S. Kedzie.
He said the pandemic has “a purpose” and he compared the stay-at-home order to PassoverÑspecifically, the last of the plagues visited upon Egypt, when Israelites were instructed by God to stay in their homes and mark their doorposts with the blood of a spring lamb to protect them from divine judgment.
“God is saying something to us, trying to get our attention,” Lindley said. “God wants us to listen to Him, to spend more time with Him.”