Skip to content
June 21, 2020/Comments Off on A ‘true friend’ to Lithuania, and to Chicago 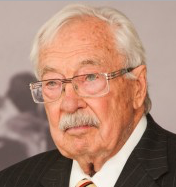 A ‘true friend’ to Lithuania, and to Chicago

For decades, people accurately described Stanley Balzekas Jr. as a pillar of the Southwest Side’s business community, as well as the Chicago-area’s Lithuanian-American community.
A native of the Chicago Lawn neighborhood, Mr. Balzekas died June 18 at age 95.
The son of Lithuanian immigrants Stanley Sr. and Emily Balzekas, Mr. Balzekas grew up in the family home at 6721 S. Rockwell and later at 90th and Bell in North Beverly. He attended Nativity BVM and McKay Schools before enrolling at Morgan Park Military Academy, where he graduated in 1943.
Mr. Balzekas then served in the U.S. Army during World War II. As an infantryman, he was among those who stormed across a liberated France in 1944 to fight the Wehrmacht on German soil. Mr. Balzekas fought in the Battle of the Huertgen Forest in western Germany, earning a Purple Heart and a Bronze Star for rescuing 12 wounded GIs from the front lines.
Mr. Balzekas was aware of the displaced-person camps set up in the war’s aftermath. Thousands of people in those camps were Lithuanians who had been uprooted from their homes. His empathy at seeing their plight would later play a role in his work to ensure that their stories were told for posterity.
In 1948, Mr. Balzekas became president of Balzekas Motor Sales, an auto dealership founded by his father, Stanley Sr., in 1919. Under the younger Mr. Balzekas’ leadership, the companyÑheadquartered in Brighton Park at 4030 S. ArcherÑgrew to be one of the nation’s premier Chrysler-Plymouth dealerships.
Mr. Balzekas graduated from DePaul University in 1951. In 1966, he founded he Balzekas Museum of Lithuanian Culture in a two-flat at 4012 S. Archer, next door to the auto dealership.
The museum was initially stocked with the Balzekas family’s collection of rare maps, armor and art. Other major gifts and purchases followed. With the help of an active group of volunteers and support of members and donors, the museum’s collections, exhibitions and programs developed.
In 1986, Mr. Balzekas moved the museum to a vacant building at 65th and Pulaski, that had been built as Von Solbrig Hospital. The building underwent considerable remodelingÑrelieving the West Lawn community of an eyesore and vastly expanding the breathing space of the museum. Today, museum officials describe it as “the largest repository of Lithuanian cultural artifacts outside of Lithuania.” It includes a permanent exhibition hall, art galleries, a library, a children’s museum, a ballroom, a theater, workshops and offices. The museum has approximately 3,000 active supporters.
Over the years, Mr. Balzekas served the city in a number of leadership roles. He was on the Board of Trustees of the Chicago Public Library for 11 years and worked with four Chicago mayors – Richard J. Daley, Michael Bilandic, Jane Byrne and Harold Washington. He also served on the Chicago Commission for Human Relations for 20 years.
Additionally, Mr. Balzekas earned a number of awards and titles for his service to the Southwest Side and to the Chicago area’s Lithuanian-American community.
In 2016, he was awarded the Grand Cross of Commander of the Order for Merits to Lithuania for the promotion of Lithuanian culture and history in the United States and for his work aimed at consolidating Lithuanian statehood and spreading Lithuanian national awareness among the migr community. This year he was presented with the Golden Vytis Badge of Honor by the Lithuanian Ministry of Foreign Affairs in recognition of his special accomplishments.
Mr. Balzekas also was the Honorary Consul of Lithuania in Florida.
“Stanley Balzekas was a true friend of Lithuania who promoted the Lithuanian identity across the world through his life-long work,” Lithuanian President Gitanas Naus_da said last Saturday. “I extend my heartfelt condolences to Mr. Balzekas’ loved ones and friends, to the World Lithuanian Community and to all those who hold the ideals he cherished dear to their heart. May his memory stay with us as a commitment to continue the activities of preserving and fostering the Lithuanian spirit worldwide.” the President wrote in his message of condolences.
Illinois House Speaker Michael J. Madigan (D-22nd), whose district office is in the Balzekas Museum building, was a longtime friend of Mr. Balzekas.
“Stanley Balzekas spent his life devoted to our community, and we will be forever grateful for his support and friendship over the years,” the Speaker said. “As the founder and president of the Balzekas Museum of Lithuanian Culture, he celebrated the notable achievements of Lithuanian Americans, the Lithuanian nation, and Lithuanian communities worldwide and enriched Chicago’s culture and history. In the 13th Ward, we consider Stanley a friend and we will miss him dearly. Our thoughts are with his family and loved ones.”
Mr. Balzekas was the husband of the late Irene (nee Radvilaite), father of Stanley III (Sigita), Robert (Daiva), Carol and six grandchildren: Irena, Stanley IV, Matthew, Margaret, Lucas and Eva. Funeral was private. Arrangements were by Palos-Gaidas Funeral Home & Cremation Service.