Skip to content
January 1, 2021/Comments Off on CHA unveils plans for LeClaire Courts 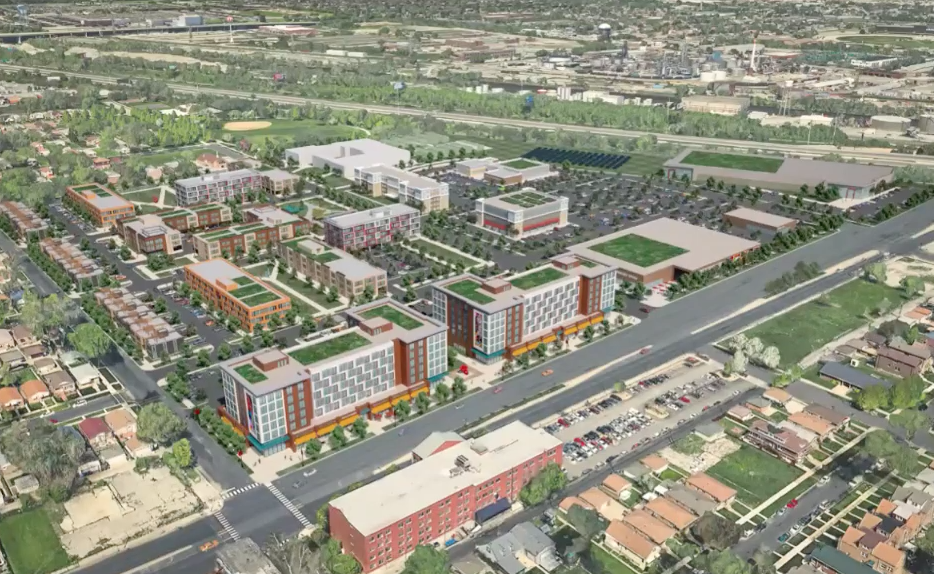 Mix of housing, business at 44th/Cicero

After a decade of stops and starts, great expectations and dashed hopes, the Chicago Housing Authority is once again moving forward with plans to redevelop the 36-acre parcel of land where LeClaire Courts once stood.

A team of developers led by Cabrera Capital and The Habitat Company joined CHA officials and 22nd Ward Ald. Michael Rodriguez recently to unveil plans via a webinar.
The large plot of vacant land (roughly from 43rd to 45th and Cicero, and then for a couple of blocks west) has been a bone of contention since the CHA razed its low-rise housing development in 2011.
Some have urged the CHA to sell the parcel to a developer so it could be a big-box store that could serve as an economic engine for the Cicero Avenue corridorÑcalled the Gateway to Midway by some.
Others have focused on building low-income housing that would allow displaced LeClaire Courts residents to return.
The CHA’s newest plan is a combination of both.
If all goes smoothly, the CHA and its development partners plan to break ground near the end of 2021.
The development will include 650 housing units. At least 220 will be occupied by CHA residents who were displaced when LeClaire Courts (and other CHA developments across the city) were torn down in recent decades.
Another 200-250 will be designated for low-income households who are not CHA residents, and the remainder will be dwellings sold at market rate.
The parcel is also expected to include what developers called a “premium” grocery store with an owner “already excited” about the project, although they declined to name the grocer.
The development will also contain a comprehensive health clinic, officials said, although they declined to name the medical provider.

Finally, the development is expected to include a day care facility and a community meeting space. It may also include as many as 100 senior citizen housing units.

The project’s price tag is expected to be $350 million, and developers said it will generate 775 construction jobs and 675 permanent jobs.
Twenty-second Ward Ald. Michael Rodriguez expressed optimism about the development, saying it “has the ability to be a catalyst” to revitalize the entire corridor, from the Stevenson Expressway south to 55th Street.

News of the plan was greeted with everything from cautious optimism to dread.

“For the greater good of the community, I think this project is a massive improvement,” said Joann Williams, president of the Hearst Community Organization. “Our community is going through some serious changes right now. A lot of the older residents are moving outÑor the Good Lord’s calling them home. We need to get stable families in the community. I think the overall developmentÑif it’s as we hopeÑwill be inclusive.
“I look forward to it because I like economic development,” she continued. “I like creating jobs for the overall good of the community. There’s not too many opportunities for minority businesses. I’d like to see minority businesses take part in this; and of course, people who live in the neighborhood would have a convenient place for shopping.”
She added that her organization will be watching the development closely to ensure that the surrounding community benefits. She also said she wants the development to include an apprenticeship program that can give young people a start in the trades.
Outside the McDonald’s at 47th and Cicero last weekend, outlooks were not as rosy.
“One of the best days of my life was when those [Leclaire Courts] projects were torn down,” said Sleepy Hollow resident Tony Battaglia. “The projects were trouble: gangs, drugs, shootings, stabbings, hookers, you name it. I dread the return of all that.”
In the webinar, developers did address that concern.
“There are [crime-related] issues all over the city, whether it’s Lincoln Park, the South Side, the West SideÉyou know, and the West Lawn area,” said Martin Cabrera, CEO and Founder of Cabrera Capital Markets (CCM) and Cabrera Capital Partners (CCP). “That is something the City is dealing withÉ.we can’t guarantee there isn’t going to be any violence. I don’t think anybody couldÉthere’s plenty of crime outside of CHA units. It’s not just CHA units that bring crime.”
Cabrera and other officials insisted that the new development will have a different look and outcome than the old LeClaire CourtsÑwith they key being the integration of market-rate housing into the mix, along with thriving businesses.
Also outside McDonald’s, Hearst area resident Tyrell Anderson said he hopes the influx doesn’t overwhelm the capacity at Hearst Elementary School, two blocks south of the development.
“You bring in 600 families, those kids have to go to school somewhere,” he said. I’m surprised [the planned development] does not include a new school.”
Vittum Park resident Jade Daniels said she doesn’t like the redevelopment plan.
“I was hoping they’d take that big, beautiful green space and turn it into a park with an interactive nature center,” she said. “This area could use more open space, especially urban prairie. If you want to talk about improving the quality of life, that’s one good way to do it.”
Officials said that further details will be unveiled in the months ahead at cabreracapital.com/leclaire.