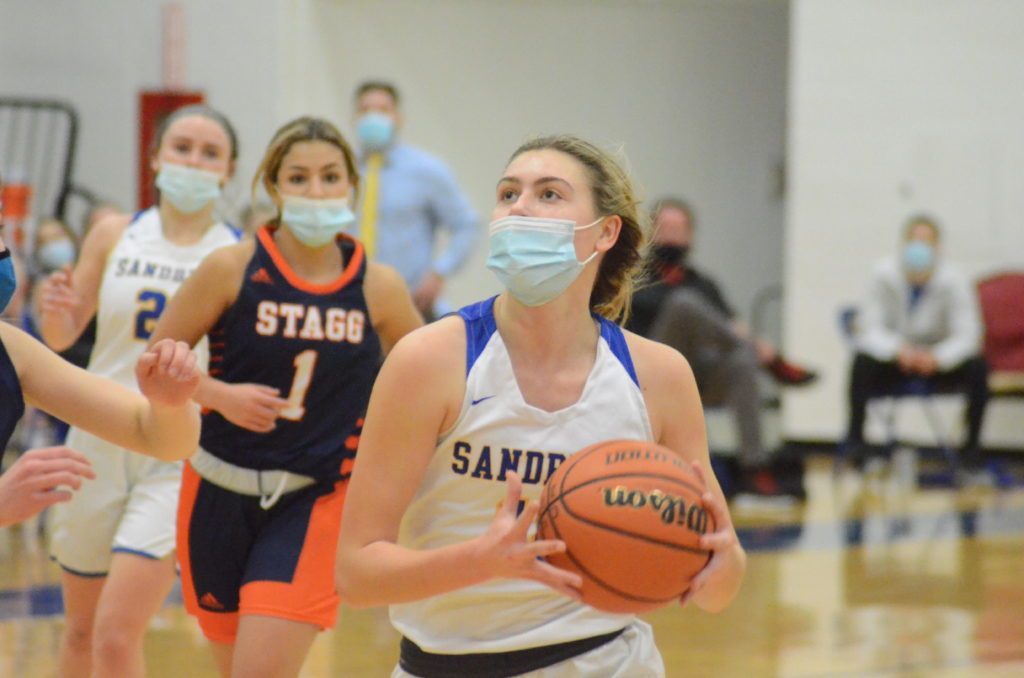 Sandburg’s Charlotte Trunk (with ball) and Stagg’s Laila Barakat led their respective teams in scoring in a matchup on Feb. 8. Photo by Jeff Vorva

When it came to deciding the winners of the 2021 District 230 showdowns between Stagg and Sandburg, look no further than the eight minutes of play after halftime.

Sandburg’s girls team enjoyed a 16-3 third quarter advantage on Feb. 8 and went on to win 44-37 in Orland Park.

The next night at the same location, the Eagles’ boys team had a 17-5 third-quarter advantage in a 57-48 victory.

It probably won’t make the Chargers feel better that in the other 24 minutes of the games the girls outscored Sandburg 34-28 and the boys outscored the Eagles 43-40; but that’s how it played out in these always-interesting meetings between these rivals.

An abbreviated basketball season is back after COVID-19 concerns threatened to shut down the season completely, and with no postseason scheduled, conference games are more important than ever. Both games were SouthWest Suburban Conference crossover games, so neither affected the standings in the Blue and Red divisions.

The first half of the boys game saw the Eagles score the first eight points and Stagg score the final 12 before Sandburg came out of the break blazing.

Omar Elagha, who missed his junior season with an ACL injury, led the Eagles with 18 points and hit five 3-pointers. Elagha tore the ligament during a summer league game after his sophomore season, and after missing his junior year and travel season he has a small window in which to impress college coaches.

“It felt good to get out there,” he said. “We didn’t know if we were going to have a season or not. It was good to come out and finally have a game. It was a good team win.”

The Eagles are inexperienced this year, which might be bad news in a Blue division that features powerhouses such as Homewood-Flossmoor and Bolingbrook. But veteran coach Todd Allen savored the victory over the Chargers.

“It was pretty much what I expected,” Allen said. “Starting out against Stagg, I wish we could have had a crowd (the gym was empty because of coronavirus concerns), but it was good to be playing. There was a little rust, and there was some good and some bad, and there are a lot of things we need to correct.”

Stagg’s stat line was bizarre. The Chargers nailed 11 of 25 from beyond the 3-point arc but were just 4 of 7 in 2-point shooting.

“We weren’t working and moving the ball well enough to get good twos against their zone, and we made enough threes to keep it interesting,” Stagg coach Marty Strus said. “It would have been awesome to have a packed house with the momentum shifting back and forth. Win, lose or draw we needed to play a game and get some experience.”

In the girls game, Charlotte Trunk led the Eagles with 16 points and 10 rebounds, while Erin O’Connor added 11 points and seven assists.

“It is awesome to see our girls being enthusiastic, passionate and genuinely happy in the gym playing,” Eagles coach Nick Fotopoulos said. “We didn’t know if a season was going to happen, but we are not taking any of it for granted and enjoying every second of it. The spirits of our girls are just through the roof right now.” 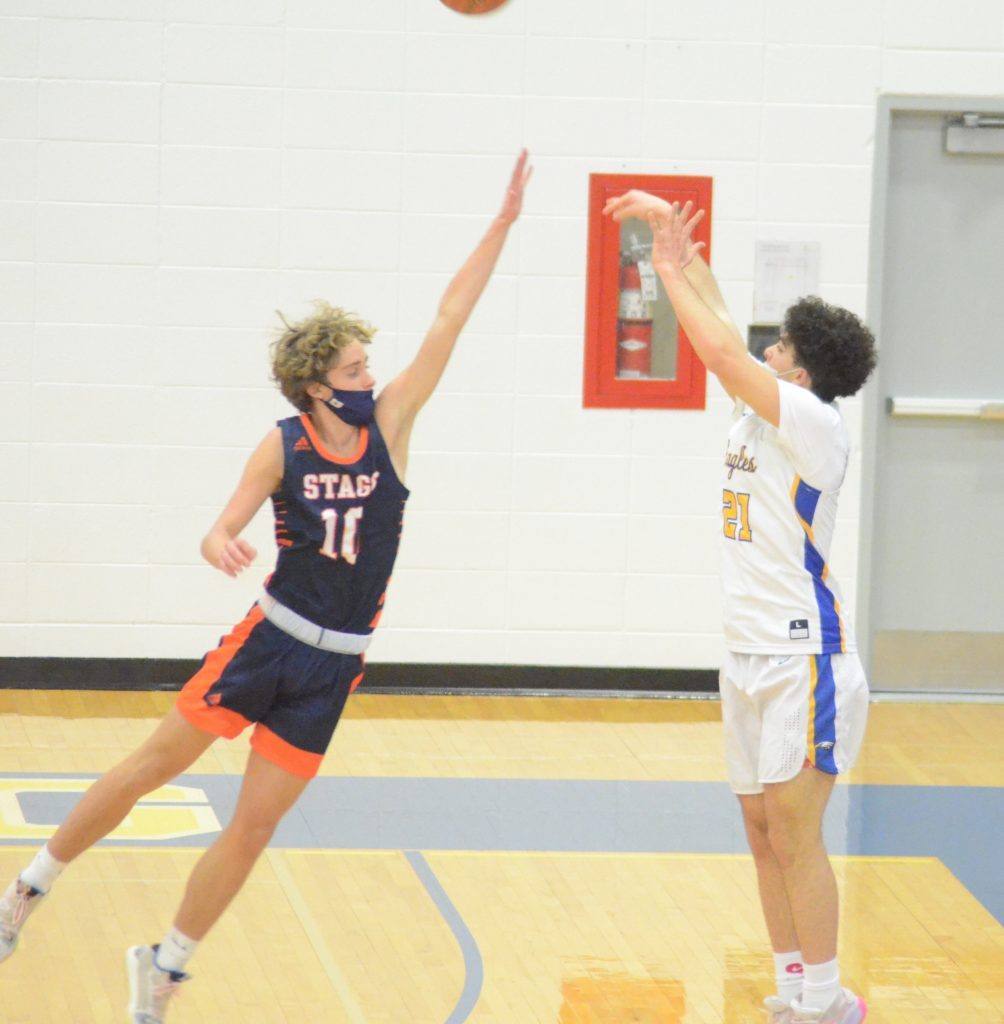 Games On
The abbreviated season ends March 13, so teams are scheduling as many games as possible, and it was a busy week for all four Stagg and Sandburg team. 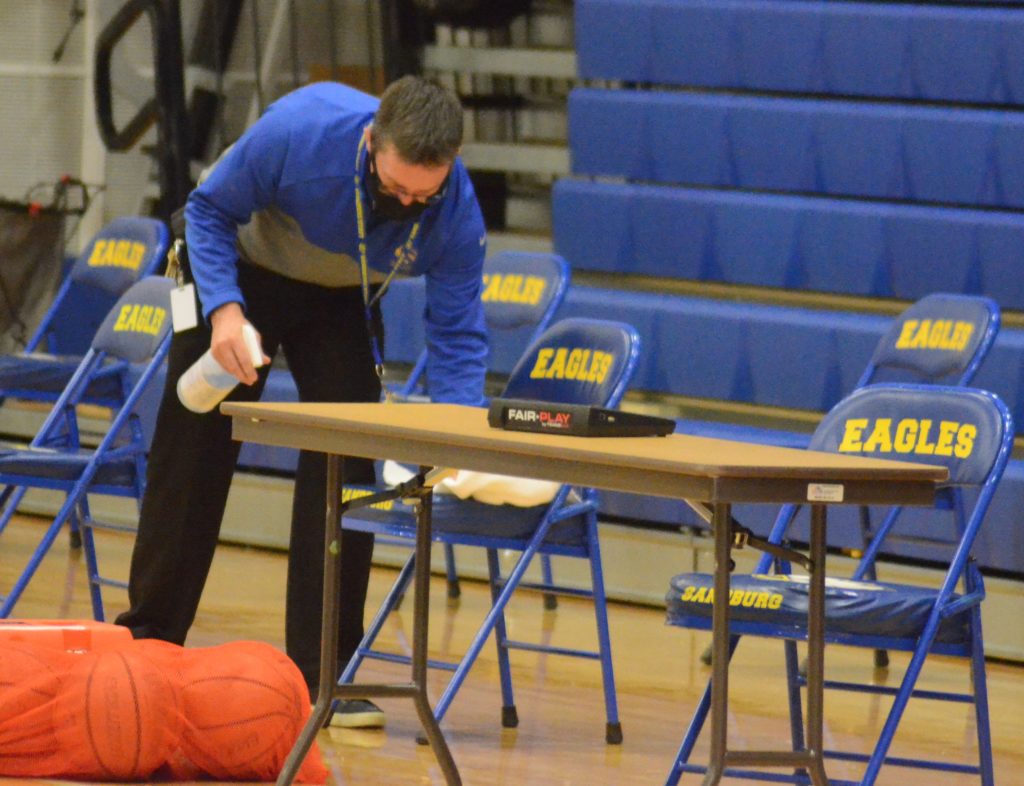 A sign of the times: Sandburg Athletic Director Steven Schanz wipes down the scorer’s tables and players’ chairs between the sophomore and varsity boys matchups between Stagg and Sandburg on Feb. 9. Photo by Jeff Vorva