Skip to content
February 26, 2021/Comments Off on Madigan taps successor 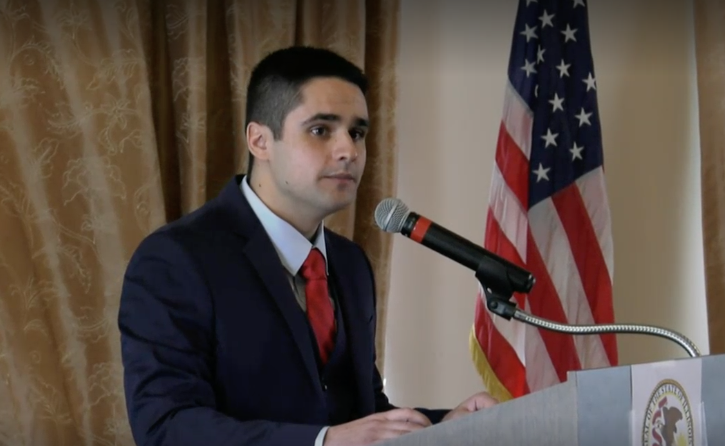 Former Illinois House Speaker Michael J. Madigan may now have but a fraction of the power he once wielded, but last Sunday it was more than enough to choose his own successor.

Carrying some 56 percent of the weighted Democratic vote in the 22nd State Representative District, Madigan (the longtime Democratic committeeman of the 13th Ward) chose Edward Guerra Kodatt to succeed him in the Illinois General Assembly.
The vote came at the conclusion of a 10 a.m. party meeting at Madigan’s longtime headquarters, 6500 S. Pulaski.

Michael Kasper, chief counsel for the Illinois Democratic Party, explained beforehand that the votes were weighted, depending on how many votes Madigan received in the 2020 election from each area. Because the majority of Madigan’s votes came from the 13th Ward (16,277), his vote was worth the most.
That was all Kodatt needed. He ended up with 63 percent, with Curtis and Cainkar adding their weighted votes to Madigan’s.
Ortz and Tabares nominated other candidates after hearing from all 10 who attended the meeting.
For now, Madigan remains 13th Ward Democratic committeeman and leader of the Illinois Democratic Party,
“I want to thank the people of the 22nd District, all the people who have permitted me to serve first as state representative and then speaker of the House for as long as I did,” Madigan said.
He was speaker for all but two years between 1983 and 2021 making him the longest-serving leader of any state or federal legislative body in United States history. He abruptly resigned last week after House Democrats voted in Rep. Emanuel “Chris” Welch (D-7th) to replace him as speaker.
“My operating mantra was to represent ordinary working people on the Southwest Side–people whose main interest in life is to get a decent job, be able to make a mortgage payment, provide for higher education for their children, and take care of their parents in later life,” said Madigan, 78, a lifelong Southwest Sider. “I hope my successor as state representative will continue that.”

Kodatt, who turned 26 on Saturday, lives in Garfield Ridge with his fianc and has been a bilingual liaison and budget assistant in the constituent services office of Madigan and 13th Ward Ald. Marty Quinn since 2017.

He has a degree in business from Eastern Illinois University and said he is pursuing an MBA through an online program at the University of Kansas. He attended St. Turibius and St. Daniel the Prophet schools before going on to St. Rita High School.
His mother came to Chicago from Ecuador at age 8 and went on to become a Chicago Police detective for 20 years. His father also had a 30-year career as a Chicago Police officer, and his stepfather retired from a 30-year career with the department as chief of organized crime.
Through Kodatt’s work with the 13th Ward, which began with shoveling snow for residents when Quinn happened to knock on his family’s door, the new state representative said he “learned to work collaboratively with all levels of government.”
“I have seen first-hand what good I can do and want to continue my work on behalf of those people in the community as a new generation steps up to lead us into the future,” said Kodatt. He pledged to focus on helping constituents find “good paying jobs, safe neighborhoods and good education.”
“I see (my age) as an opportunity to bring new ideas and perspectives here to the Southwest Side, which is a thriving community.”
“I am ready to come into the office on Monday and get to work,” Kodatt said moments after he was sworn in by Cook County Circuit Court Judge Daniel Malone, another Southwest Sider.

Madigan said afterward that he is confident he’s leaving the district in good hands because Kodatt “is well-versed in the issues affecting the 22nd District and has a very good knowledge of state government.”

“He’s a firecracker with a lot of great ideas,” added Curtis, explaining his support for Kodatt. He said he reminded him of himself at that age. “He has come out to help us in the 18th Ward, and with the campaigns of State Rep. Mary Flowers (D-31st) and others.”
Kodatt beat out some well-known business and community leaders on the Southwest Side who threw their hats in the ring when Madigan resigned. They included Clearing resident Anita Cummings, a founding member and Executive Director of the United Business Association of Midway, and Mary Ellen Brown, president of the Garfield Ridge Chamber of Commerce and owner of Midway Storage and Truck Rental.
Former State Senator Robert Raica (R-24th) also put his name up for consideration.
Ortz pointed out that the district is now 70 percent Hispanic, and he asked all the candidates was whether they would support the efforts of the Illinois Legislative Latino Caucus. Because ZIP codes 60629 and 60632, which the district includes, are some of the hardest hit by COVID-19 infections, he also asked all the candidates what they felt should be done to attack the problem.
Ortz, a political protg of U.S. Rep. Jess “Chuy” Garca (D-4th), voted for West Lawn resident Silvia Villa, a professor of Latino studies and an administrator at the University of Illinois at Chicago, with a doctorate from Princeton University.
Tabares voted for Angelica Guerrero-Cuellar, a community services volunteer who works with several non-profits in the area. The alderman said afterward that she was disappointed with what she called Kodatt’s vague answer about what bills or issues he would focus on. He did not seem to understand one question she asked in Spanish and declined to say whether he would have voted for the controversial House Bill 3653Ña criminal justice reform measure–saying he would need to read it.
Brown said she was “definitely disappointed. I thought (the process) was going to be transparent and a real opportunity to go forward. But it seems they had already picked their candidate. But we will work with him. Our goal is always to make sure our membership is represented whoever is in office. Hopefully, because he has been mentored by Madigan and Quinn, he will do well.”
Cummings said she put her name forward at the last minute because she wanted to stay involved in the community.
“I would certainly congratulate the new state representative,” she said. “I think he was articulate and bright, and he brings some new energy to the district. Mike Madigan was good to his district, and he was always good to us (in the business community). I would hope that he doesn’t forget our businesses and remember that he is standing on the shoulders of giants who went before him here. We have a lot of older people here who have worked hard to keep the district what it is, and they should be remembered.
“Kodatt can definitely expect to get an invite to speak to us at UBAM,” she added with a smile.
Southwest Side community leader Al Cacciottolo said of Kodatt, “Eddie is a good young man from a good, solid Southwest Side family. He’s a hard worker with a lot of energy. He will learn quickly in Springfield. But most important, I think he will be fair with everyone, city and suburban, regardless of who you are or where you live. That’s what everyone wants.”