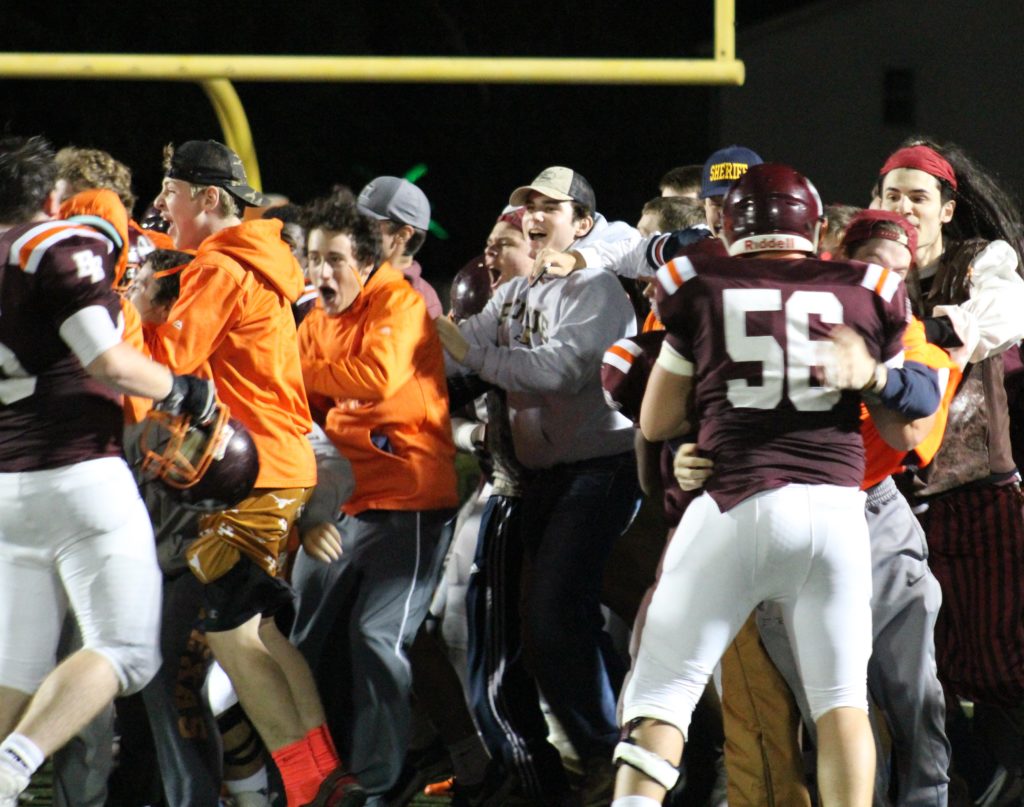 After a thrilling 21-20 overtime win by the Crusaders in the sophomore game, and prior to the main event varsity game, Brother Rice held a ceremony renaming the field after legendary head coach, Tom Mitchell. Mitchell, a Mount Carmel alum, coached the Crusaders from 1967 through 1993 and led Brother Rice to a state title in 1981.

Head coach, Brian Badke, had one word to describe the game — special.

“It was a special night,” he said. “And what a heck of a football game. Give credit to Mount Carmel. They played great. I tell you what. Our guys are special. They didn’t give in. They never gave up.”

Special nights are usually platforms for special players and few are as special as Brother Rice’s Ricky Smalling. The Illinois recruit collected over 170 yards receiving and two touchdowns. His 55-yard score late in the third quarter gave spectators a big taste of his special talent as he tip toed and danced his way through one Mount Carmel defender after another and across the goal line to tie the game at 35-35.

“He’s a guy you definitely want on your football team,’’ Badke said. “He can do anything. He’s a great football player. He’s been here four years and we’re lucky to have him. And he’s not done yet.”

Quarterback Dino Borrelli accounted for five touchdowns–four through the air and one on the ground–and 389 passing yards.

Mount Carmel’s Michael Kennedy showed off some of his special talent as well in the back-and-forth third quarter. Kennedy ran for a 24 yard touchdown and threw for one, a 70-yard pass to Jordan Cousert on a half back option.

In a game that featured 13 touchdowns, 91 points and close to 1,000 yards of total offense, it was a defensive play that saved the day.

Aarion Lacy picked off Alek Thomas’ pass inside the five-yard line with less than 20 seconds to play to end Mount Carmel’s last chance to at least tie the score.

“Big time players make big time plays,” Lacy said. “Our offense had bailed us out all night but we made the plays when we needed it.”

In fact, Lacy made nearly the same play twice. One play prior to his game-deciding interception, Lacy picked off Thomas’ pass but the play was nullified because of a roughing the passer penalty.

“I was pissed,” Lacy said. “I just knew I had to go out and get another one.”

With the win, the Crusaders stay perfect at 6-0 (2-0 in the Catholic League Blue) and are a lock in qualifying for the Illinois High School Association playoffs while the Caraven dropped to 3-3, 0-3  an lost three in a row to Brother Rice.

So, what would coach Mitchell think of this game?

“I could tell you, definitely, I don’t know if we’d have scored that many points,” quipped Badke. “But I know he would have been happy with the result.”

By PETER HANCOCK Capitol News Illinois [email protected]s.com SPRINGFIELD – The Illinois Supreme Court on Thursday rejected a lawsuit filed by two former state legislators who sued for back pay they believed they were due for raises that they voted against while in office. Former Sen. Michael Noland, D-Elgin, and former Sen. James Clayborne, D-Belleville, argued…