May 17, 2021/Comments Off on Thorns bury Red Stars with four goals in first 30 minutes 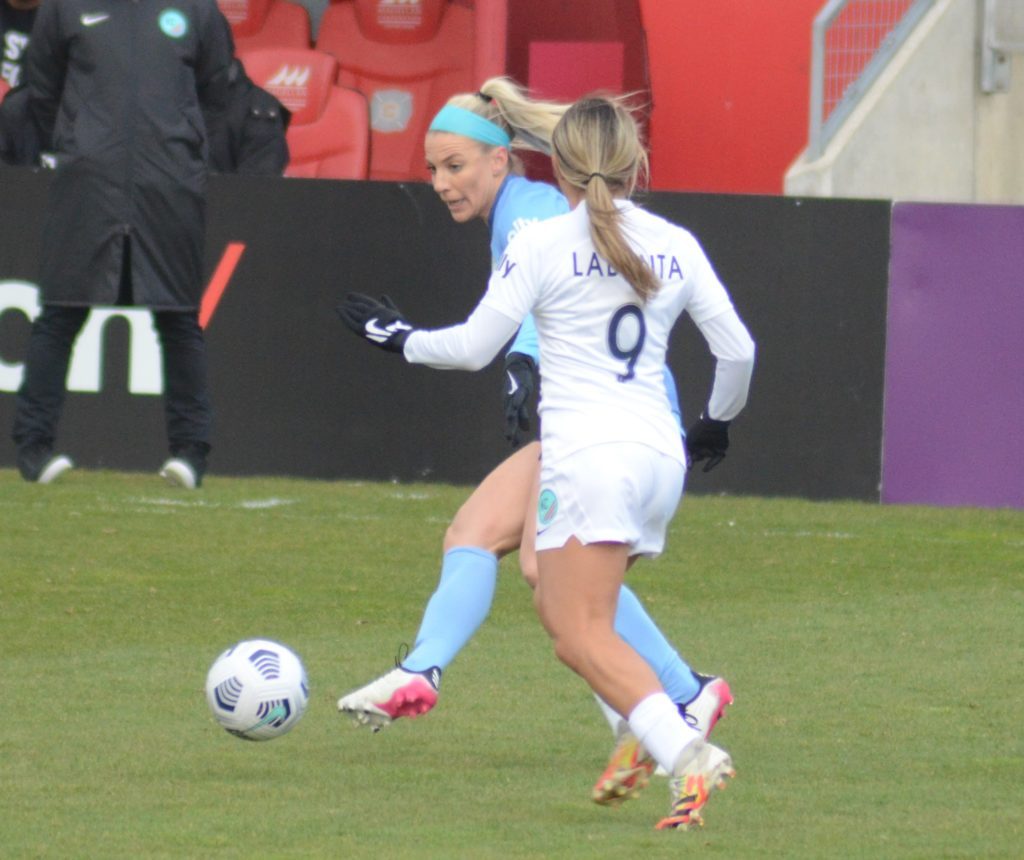 Red Stars standout Julie Ertz, shown trying to get by a KC player earlier this year, was injured in a 5-0 loss to Portland on May 16. Photo by Jeff Vorva

The good news for the Chicago Red Stars is they’ll be playing in in front of fans in Bridgeview for the first time since 2019.

But that’s about it right now, as far as good news goes.

The Red Stars will head into their 2021 home opener 7 p.m. matchup against NJ/NY Gotham FC at SeatGeek Stadium on a down note after dropping a 5-0 decision to Portland Sunday at Providence Park.

Not only that, Julie Ertz, one of the stars of the Red Stars and the soccer world, left the game with a knee injury after a collision at the 29-minute mark of the NWSL opener for both teams.

Red Stars coach Rory Dames said after the game that he would not speculate on the injury until results from an MRI are revealed.

“She came back on the bench in the second half and cheered the players on, so I think her spirit is OK,” he said. “Julie is a pretty tough woman so we certainly want to make sure we do everything we can to have her ready for the Olympics, and we know how important she is to that team and our team.”

Portland, which has won 20 of the last 21 meetings with the Red Stars, is considered the favorite to win the league championship this year after winning the NWSL Challenge Cup earlier this month. The Thorns scored four times in the first 30 minutes.

Four minutes into the game, Portland got on the board when the ball went off Red Stars defender Tierna Davidson and into the net for an own goal.

Nothing went right after that.

“The list can get pretty long on that,” Red Stars defender Casey Krueger said when asked what went wrong. “We were flat. We weren’t ready. We got broken down in many different ways. I do think we will learn a lot from this game. The good news is that it’s Game 1 and we can move forward and learn.”

Olympic hopeful Sophia Smith scored two goals in 14 minutes for the Thorns while Christine Sinclair scored her 61st NWSL career goal, which is the most by an active player.

Before the opener, Kaela Watt said this match would set the tone for the season. Dames countered that this team doesn’t get too high or too low and that the lasting effects from the opener should be minimal.

“I don’t think we weren’t prepared for them,” the coach said. “I just think we made some bad decisions, and Portland is a team that will punish you for those.”

Milazzo sees action
Orland Park native and Andrew graduate Tatumn Milazzo came into the game at the 46-minute mark and the defender had 31 touches, 16 passes, a 62.5% passing accuracy total and three tackles in her first regular-season NWSL game.

“We just wanted to play better in the second half,” Milazzo said. “My goal was to lift up the team and do what I could to help us get back in it.”

About Gotham…
NJ/NY Gotham FC, the Red Stars’ next opponent, beat the Houston Dash, 1-0, on May 15. Midge Purce scored 30 minutes into the match for the lone goal.

Gotham FC is the rebranding of Sky Blue FC, a founding member of the NWSL, beginning with this season. The franchise is based in Harrison, New Jersey, and plays its home games at Red Bull Arena.

Sky Blue FC won the inaugural Women’s Professional Soccer championship in 2009, and joined with seven other teams to form the NWSL in 2012.