Skip to content
June 4, 2021/Comments Off on Boitsov Ballet will expand 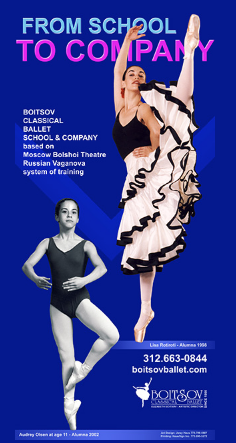 Eight years after she brought her classical ballet school to the Southwest Side, Madame Elizabeth Boitsov is looking to expand.

An internationally acclaimed ballerina and ballet teacher, Boitsov recently hosted an invitation-only luncheon at her school’s storefront near Archer and Mason.

The purpose of the small gathering was to announce the launch of a production company linked to the school and generate community support.

“Boitsov Classical Ballet Productions was formed to offer a solution — to provide family-friendly fine arts productions that educate and inspire the young and the young-at-heart while being accessible and affordable,” Boitsov told her guests.

Boitsov Classical Ballet Productions is looking to start staging productions on a semi-annual basis starting in 2023, with Pinocchio in the spring and Hansel and Gretel in the fall.

The cast of these productions would be filled primarily by professional ballet dancers, while also providing students at Boitsov’s school opportunities to be cast, enabling students to gain professional experience.

“I love to share my knowledge of performing and teaching ballet to prepare fine arts professionals for careers in ballet, but the major emphasis for dance is performance,” said Boitsov, a spry, cheerful woman who looks years younger than her age. “Dancing before a live audience is what all the work is for and where the magic happens.”

That matters, she added, because the average price of just one ticket to a ballet performance downtown is about $181 – making it out of reach for many Southwest Side parents who want to expose their children to the arts.

To make these productions even more accessible to the community, Boitsov’s production company will also stage smaller performances in community spaces such as public libraries and schools.

Before 2023 there are several things community members can do to help make Boitsov’s dream of bringing fine arts to Garfield Ridge a reality.

The company is currently looking for spaces to stage these performances with the hopes of eventually having a performance space of their own. There are opportunities for community members to become donors and receive advanced notices of productions and projects. Businesses can sign up to sponsor productions. There are also opportunities for volunteers to join and help run and promote events.

Those interested in helping Boitsov Ballet Productions can call the school at (312) 663-0844 or contact them through boitsovballet.com.

Boitsov was born in the old Soviet Union and started practicing ballet at age 4.

As a young adult in the 1970s, she left home to teach ballet in Poland and later Sweden, before coming to the U.S. and eventually setting up shop in Chicago in early 1980.

With her husband, Vladamir, she founded her school in the South Loop, along with a ballet company. Both thrived and drew critical acclaim until Vladamir died from lung cancer in 2000. The company shut down, but Boitsov maintained the school.

In 2013, she closed its downtown location and relocated to Garfield Ridge—a move she called “a dream” she and her husband shared, to make classical ballet more accessible to communities not normally exposed to it. Today, Boitsov lives in Garfield Ridge.

The school’s move was made possible through assistance from the Greater Southwest Development Corporation, which over the past seven years has helped her organize her school from the business end.

The school teaches the Vaganova Technique of Russian classical ballet. “This technique is practiced around the world,” according to a statement on the Boitsov website. “It is the highest standard by which a professional ballet dancer is trained.”

The school accepts girls and boys as young as age 4 and teaches them all the way to adulthood, with an eye on them having careers as professional dancers. 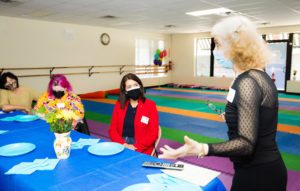 Madame Elizabeth Boitsov outlines her vision for a ballet production company on the Southwest Side. –Photo by Lorena Paredes