Skip to content
June 26, 2021/Comments Off on He’s running for their lives 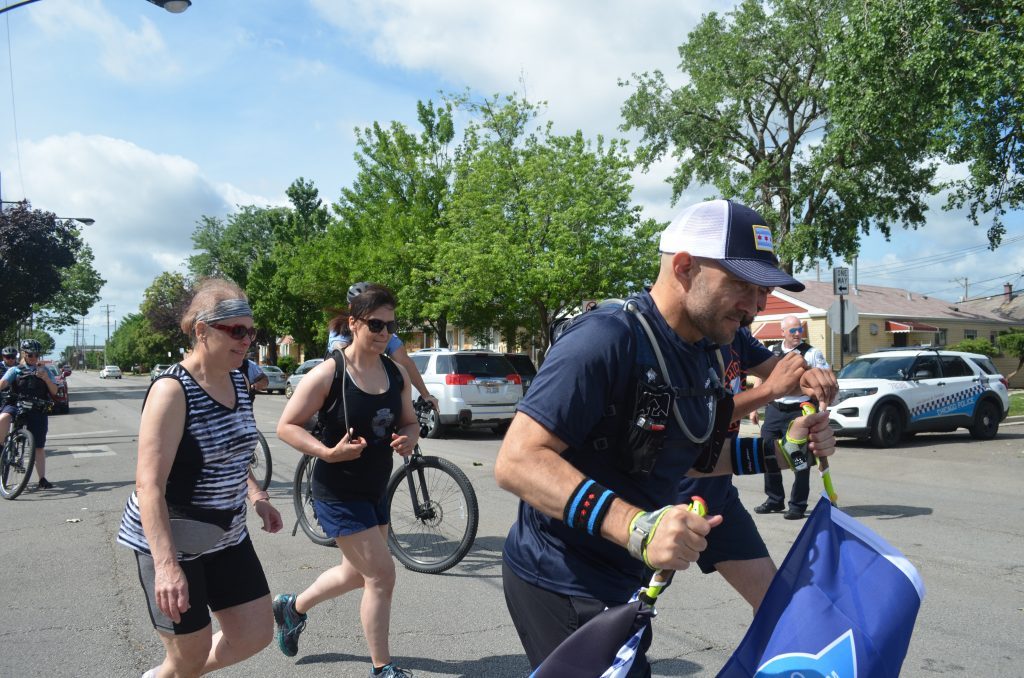 With family, friends and CPD officers running and/or riding alongside him, Robert Swiderski (foreground) takes the first steps of his 80-mile trek to prevent suicide and promote better mental health among police officers in Chicago. --Photo by Cosmo Hadac

He’s running for their lives

When he was a teenager running cross country for St. Laurence High School, Robert Swiderski probably could not have imagined what he’d be doing more than 30 years later.

But there he was, at his parents’ home at 64th and Narragansett earlier this month, an avid runner taking the first step of a two-day, 80-mile run across the city—running to all Chicago Police Department district stations to help prevent suicide among law enforcement officers. 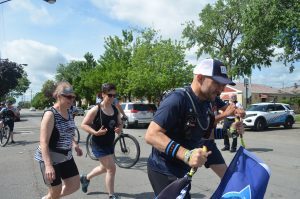 With family, friends and CPD officers running and/or riding alongside him, Robert Swiderski (foreground) takes the first steps of his 80-mile trek to prevent suicide and promote better mental health among police officers in Chicago. –Photo by Cosmo Hadac

“Suicide is an extremely serious and troubling thing—in the general population and certainly in the Chicago Police Department,” Swiderski said, adding there are on average 132 suicides across the U.S every day—but 29 times that number of attempts. That figure does not include an even larger number of people considering but not yet attempting to kill themselves.

For Swiderski, the numbers are more than statistics. In his mid-20s, he struggled with depression and made an attempt on his own life.

His journey from that dark place back to mental wellbeing was not easy, but one key was acknowledging the struggle.

“Like so many people in my situation, I thought I was alone,” Swiderski said. “That made the struggle so much worse. But then I came to realize that if I reached out for help, my life would change, and it did. I realized that there’s a better way to live, and the thing to understand is it’s OK not to be OK.”

What also helped is his devotion to running, widely acknowledged as a tool to clear the mind and help people center themselves mentally. These days, Swiderski runs marathons and even ultra-marathons, often with a charity-driven purpose. 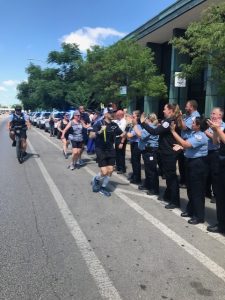 Robert Swiderski and supporters run east on 63rd Street, with a line of police officers applauding as they approach their first of 22 stops: the Chicago Lawn (8th) District Police Station. –Supplied photo

In 2021, Swiderski works as an organizational development specialist, an emotional intelligence coach who teaches people to be more honest with themselves so they in turn can be more honest with others—making them better employees, better spouses, parents, neighbors and members of society.

His purpose with running for CPD is to drive home the message that it’s OK not to be OK, and to seek help to avoid suicide and become mentally healthy.

“There are 12,000 officers in Chicago Police Department,” Swiderski said. “ I know that so many of them are dealing with the everyday stress of the job, but so much more. They start their shift knowing they could be shot at, they could be shot, they could be killed. I can’t even imagine that kind of stress. Can you?”

Compounding the problem, ironically, can be the praise that is heaped upon them by people with good intentions.

“Police officers often hear the word ‘hero’ applied to them, but there’s a downside to that,” Swiderski said. “Many internalize the ‘hero’ label and think they have to be strong and flawless every hour of every day. But while many of us may see police as superheroes, the reality is they’re human beings, just like everyone else. We need to ensure that they have the help they need when they need it, and they’re not afraid to be honest with themselves and seek it.

“The stress a police officer endures doesn’t just go away,” he added. “They have to process it in some way. Some choose unhealthy ways, like alcohol or drugs. Others choose healthy ways, like exercise or mental health therapy.” 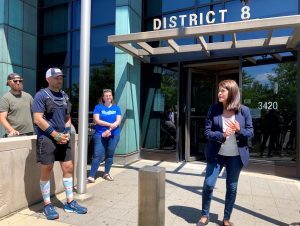 What also motivates Swiderski is his personal connection to CPD. His father, Bob Swiderski Sr., wore the badge and retired from CPD after 31 years. His uncles, Ed Swiderski and Al Swiderski, and cousin, Brian Skora, are also retired CPD officers.

Clearing and Garfield Ridge residents who want to learn more about Swiderski’s ongoing effort, Running for Blue Lives, are encouraged to visit give.cpdmemorial.org/runningforbluelives.