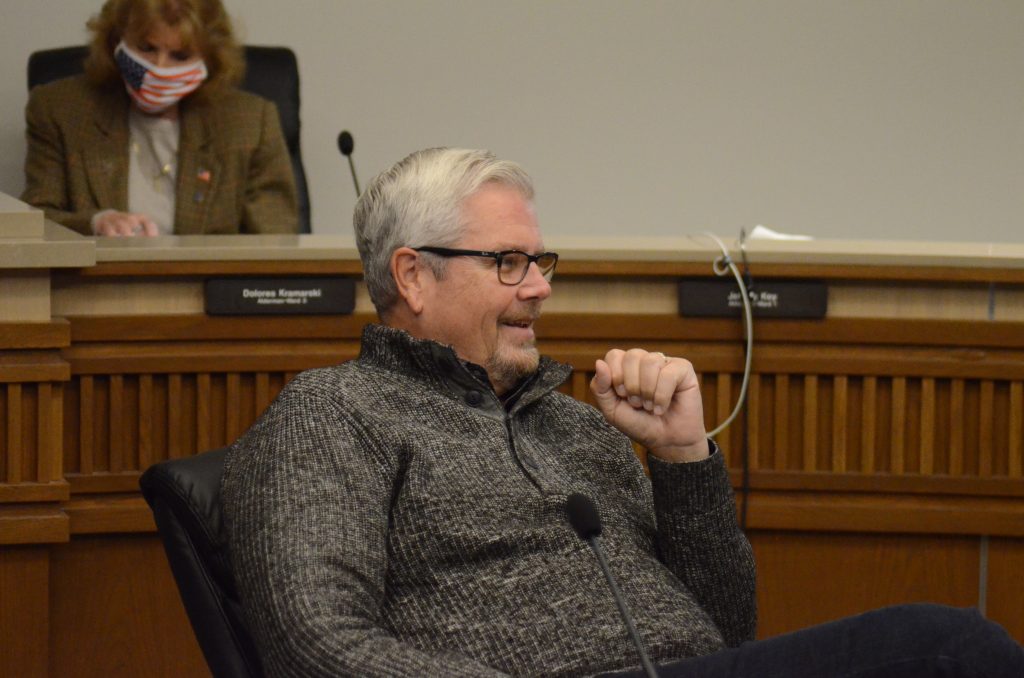 Palos Heights Ald. Jeff Key, shown at a past meeting, was full of good news on Tuesday night regarding the return of events to the city. (Photo by Jeff Vorva)

Kris Kringle Market and other events returning to Palos Heights

But Key, who oversees recreation in the city, played the role of the man giving out good news, with announcements of the return of a handful of beloved city events including Kris Kringle Market, which is scheduled to be back Dec. 3-4 in the Municipal Parking Lot, 12221 S. Harlem Ave.

“Last time we had it [in 2019], we had 75 vendors under a tent,” he said at Tuesday night’s city council meeting. “We hope to have that many again and some food vendors as well.”

Santa Claus will appear both days at the event.

Kris Kringle Market and many other city events were cancelled in 2020 because of the pandemic and Key was happy to announce the return of the events.

The Classic Cars event returns at 5 p.m. next Thursday along Harlem Avenue. More than 500 cars are expected to be on display.

“There will be food vendors and music happening,” Key said. “You can bring out your whole family. It’s a nice event where you can just walk around and enjoy a time to get together with friends.”

Key also said the Welcome Back Trinity event at Trinity Christian College will be welcomed back in August on campus.

“We get businesses in town to offer discounts for students and their families,” Key said. “We have the recreation department there to talk about volunteer opportunities. [Representatives from] Lake Katherine and the police are usually there. We bring all the entities of the city to the college.”

Mayor Bob Straz said he has heard great feedback from people about the return of the events leading up to and during the Fourth of July weekend.

In particular, a fireworks show on Saturday and a parade on Sunday gained the most goodwill

“It was an outstanding weekend in Palos Heights,” he said. “We had great crowds and great turnouts and people enjoyed themselves. Our staff and city workers did a great job and everybody pitched in.”

Ald. Jack Clifford said that next Thursday will start more road construction at various areas around the city.

Notices will be sent out to residents in the areas affected.

Included in the project are parts of Menominee Parkway, in which local traffic will be allowed but those who don’t live in the area will have to detour to get around.