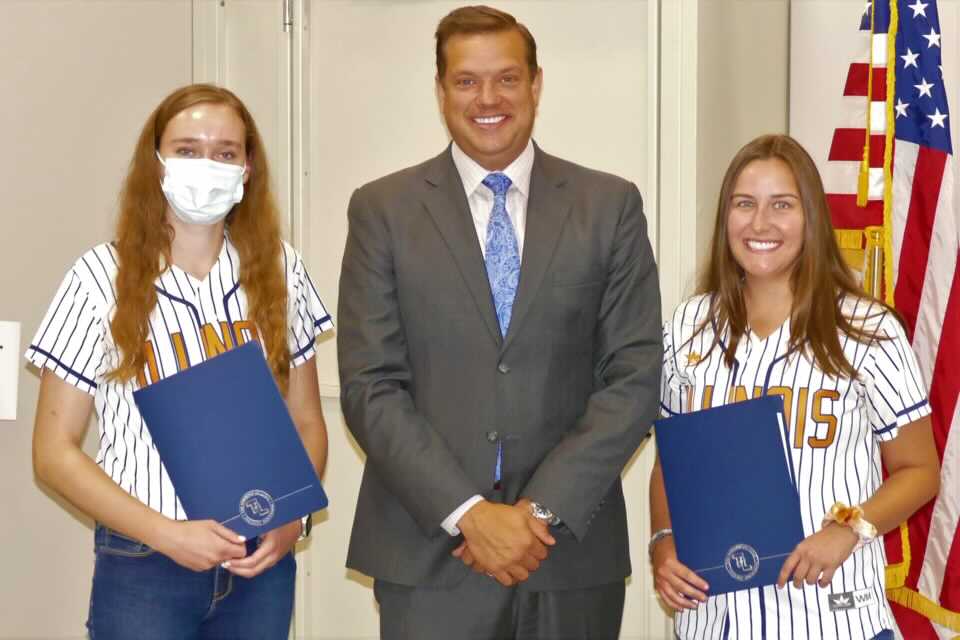 Three local residents who participated in the 2021 National Club Softball Association World Series were honored last week at the Lyons Township Board of Trustees meeting.

All three played key roles for the University of Illinois’s softball team that played in the National Club Softball Association 2021 World Series in Columbus, Georgia, in May.

Township Supervisor Getty presented the local players with a Certificate of Proclamation from the Township of Lyons, for their participation in, and support of sports and athletic achievement, as it’s an important part of the school’s athletic program, and develops leadership skills and creates a tradition of excellence.

The proclamation recognizes their outstanding achievement, excellence, tradition, leadership and the positive role mode for the youth that the ladies have provided for the community.

In other business at the meeting, donations were approved to the Center for Independence, the Rosemarie Lipinski Memorial Fund, and to the Lori Tobolski Family Memorial.

The Honorable Russell W. Hartigan was appointed to the Mental Health Commission Board of Trustees for a four-year term. Hartigan last served in that role in 2008. He is a past township supervisor, trustee, and former circuit court judge. He was not in attendance.

On October 20, from 10 a.m. to 2 p.m., a Mobile ID event will take place in conjunction with the Illinois Secretary of State. It’ll be held in the Township of Lyons’ Community Room.

The Secretary of State will have representatives from their office at the Township that day who will set up work stations and assist residents with Driver’s License Renewals, State ID Cards, Duplicates Licenses, Corrected Licenses, Vision Screenings, Vehicle Renewal Stickers, Address Changes and Title Only Transactions. Road Tests and Real IDs will not be available at this event. Driver’s Licenses may be renewed up to a year in advance.

In conjunction with the Mobile ID event, a representative from the State of Illinois’ Treasurer’s Office will be on site with the I-CA$H program. The program assists residents in a search for unclaimed property that’s owed to them and being held by the State of Illinois until the affected party submits a claim.

In a first for a township board meeting, a trustee attended by calling in from overseas while serving our country.

Trustee Mike Porfirio, a graduate of the Naval Academy at Annapolis and a commander in the Naval Reserve, attended the meeting via a conference call from Korea, where he is on temporary active duty.