August 21, 2021/Comments Off on Charging into a new era: New Stagg AD Jen Doede has landed her dream job 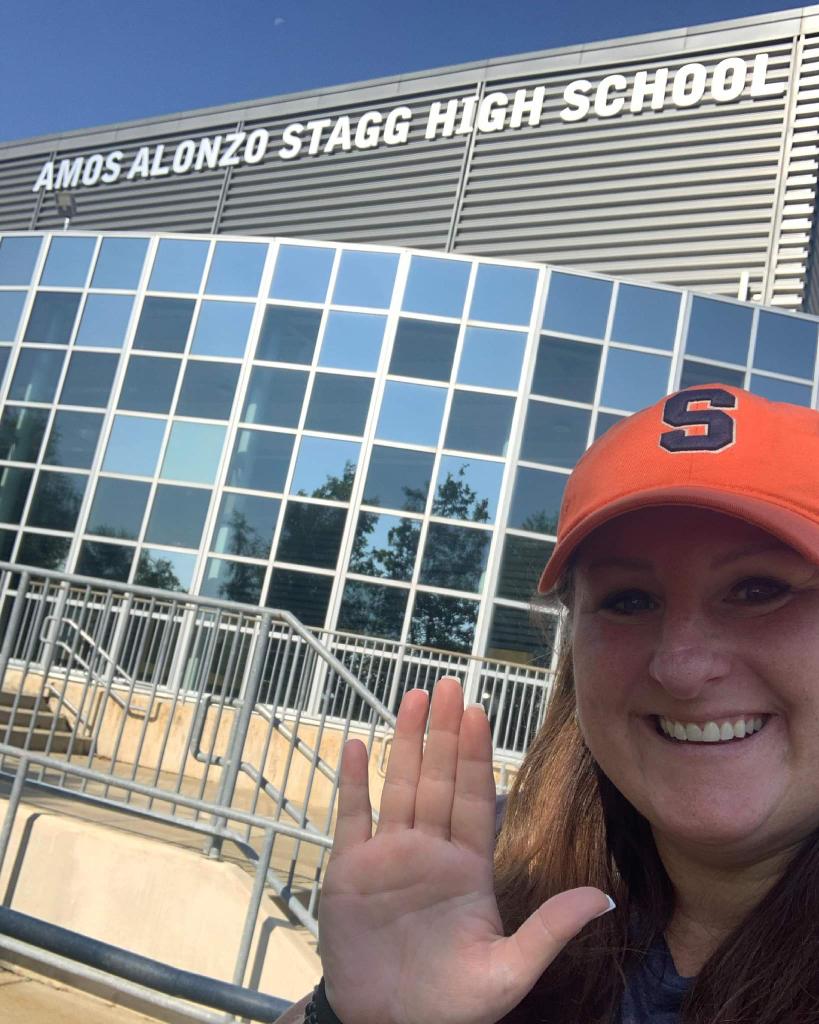 Jennifer Doede wants to leave the world a better place.

Her next step in that journey will be as the athletic director at Stagg.

Doede officially took over the position July 1. She replaces Terry Treasure, who had served in the post the past seven years.

This is a dream job for Doede, who had been in the same role at Joliet Central for the past two years. She is a 1994 graduate of Andrew, where she played volleyball and softball.

“I always wanted to be involved in sports and athletics somehow,” Doede said. “Just because of the joy it brought me.”

She took the first steps toward that by earning degrees in athletic training and secondary education from North Central College. Soon after graduating, she took a job at Reavis and was there for four-and-a-half years. She jumped into the world of coaching right away, becoming the head boys volleyball coach for a couple of seasons, leading the Rams to a regional title in 2003.

Doede then moved on to her alma mater. While at Andrew, she got to experience working side-by-side with a pair of persons who influenced her, softball coach Carrie Cox and girls volleyball coach Barb Walaszek.

“They were two female leaders to have as role models,” she said. “So to teach with them was such a cool experience.”

So was being the head girls volleyball coach for five seasons between 2004-08, which included a trio of regional championships from 2004 through 2006. That led to her considering a larger leadership role in athletics.

“I got the job as division chair for health, drivers ed, and physical education at Andrew and had to step down from coaching,” Doede said. “Between the volleyball role and being division chair I found (athletic director) was something I wanted to do. I worked closely with (former Andrew Athletic Director Rich Piatchek) as a coach and as a division chair. He taught me quite a bit of stuff.”

In fall 2018, Doede was filling in at Stagg when then-assistant athletic director Missy Mason was on leave.

“I was doing both my job as Andrew and helping out there,” she said. “That taught me a lot.”

It also helped open the door as far as experience when she applied for the Joliet Central athletic director job in 2019. She got it and spent two years there.

“It was awesome to work there and I feel blessed I got the time to work there,” Doede said. “But I was in District 230 for 16 years and spent a lot of my educational career here. I had connections with coaches and administration there.

“It was an opportunity to come back home, so I put my hat in the ring and here we are.”

She replaces Treasure, 58, who spent 33 years in education. Many of those years were at Stagg, where he started as a physical education teacher and was involved in coaching baseball, football and wrestling. He was a dean and assistant principal for 14 years at Sandburg, as well.

“I have seven grandkids so it will be nice to see them and not work until 9 p.m.,” Treasure said. “But I’m not complaining. Being involved in athletics made the job enjoyable. There was not a day where I felt like I was at work.”

There were a lot of memories and some success, too.

“One of the best memories was the success of the boys and girls soccer teams,” Treasure said of the 2014-15 season, when the boys team won a regional that fall and the girls captured the sectional championship in the spring.”

Treasure has no doubt Doede will do a fantastic job.

“I’m a big fan,” he said of Doede. “I’m excited for what she is going to do at Stagg. She is going to take the school to new heights. I could tell instantly (when she helped out in 2018) that everything just clicked with her. Someone just had to give her an opportunity and, thankfully, Joliet Central did.

“She fits into the staff and the community. I have no doubt that Stagg is going to be in excellent shape.”

Doede, who has done her research on the school’s namesake, knows that success has eluded some Stagg programs in recent times. She’s looking for Charger Nation to turn it around and is starting with communication.

“I’ve been meeting with the head coaches and getting to know them,” she said. “We want to accomplish an athletic mission statement and strategic plan. It’s working together to get the best out of everyone. Working hard will result in wins. But I need to live through it and learn, too. It’s not just my program; it’s our program.”

She plans on taking what she’s learned over the years and sharing it.

“It’s just passing that passion onto the next generation,” Doede said. “It’s always been there. Now I just want to be a good role model for future generations.

“The best part is the impact you have on lives. You don’t see it right away, but when you do it’s very fulfilling.”