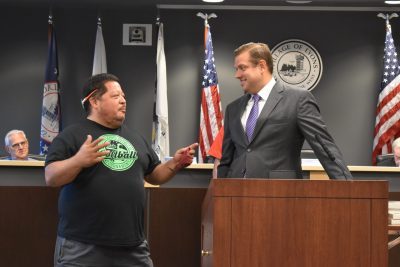 The Lyons Village Board paused from regular business to honor the Lyons-McCook softball team that won a district championship and took fifth in the state.

Most of the players, wearing their bright red uniform T-shirts, gathered to receive plaques noting their accomplishment.

He’s hoping much of the team returns for another run at the state title in 2022.

Lyons-McCook beat La Grange to win the district championship in Brookfield on July 1. The team than advanced to state with games played in Melrose Park.

Bella Perez, who plays third base, pitched one of the games at state.

“We’ve been playing together since we were really young,” Perez said. “This year is our last year all together, so it meant a lot to us going so far.”

All those games meant the team “knew how to work together so well,” Perez said.

“Thank you for the practices, the games, taking them to the games. It means a lot. I’m very proud of these girls,” Sandoval said.

Lyons Mayor Christopher Getty said the team did an excellent job representing the two villages. He said he appreciates “the work and the effort” the team put into the season.

McCook Mayor Terrance Carr is also impressed by the team.

“It’s amazing they’ve come back after a year of COVID, sit down, don’t do anything, then to get out there and play for the (state) championship,” Carr said.

Lyons-McCook had just enough girls for one team at 14-U. Rather than play in-house as do most leagues, Lyons-McCook found itself with regular season schedule playing teams from La Grange, Brookfield, Archer Manor and other communities.

Sandoval thinks all those games with other communities helped prepare the girls for the deep run at state.

In other business, the village board approved two contracts that will improve the fire house on Joliet Avenue.

The board agreed to pay Pelar Construction of Chicago $49,837 for seven steel access doors; and an amount to not exceed $76,445 to Builders Chicago Corp, of Rosemont, for overhead fire station doors.

“I’m very supportive of this motion,” Trustee Dan Hilker said. “Pelar has done some work at the Lyons Public Library.”

Hilker, the library director, said the company is aware of users in the building and did a good job with that.

The board also approved a resolution authorizing the village manager Tom Sheahan to negotiate and execute a contract with API Architects, of Hoffman Estates, for an inspection of the village hall.

“From what we know, there’s nothing wrong with this building,” Getty said. “It’s 12 years old. We want to be proactive. We want to assess the roof, the walls, the joints, get a checkup it so we can forecast and prepare for the future.”