September 23, 2021/Comments Off on Worth residents salute impact of late Frank Bonham 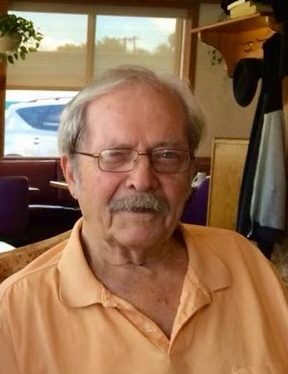 Frank Bonham left a legacy and a lot of smiles with Worth residents who knew him.

Bonham, 93, died March 28 after serving the community of Worth for 52 years. The U.S. Navy veteran was a bricklayer foreman for 42 years. He began his long affiliation with the village with the Worth Volunteer Fire Department in 1969 and retired as fire chief in 1989.

He served as the chairman of the Worth Planning and Zoning Committee from May 1974 to May 1993. But Bonham was also remembered as a Worth village trustee for eight years. He served on the police commission from 2001 until he died.

Worth public officials, relatives and friends said during the village board meeting Tuesday night that Bonham would go out of his way to help anyone.

“I worked with Frank for a number of years and I want to say he was a pleasure to work with,” said Timothy Denton, the Worth police chief. “Rest in peace and thank you.”

Worth Mayor Mary Werner greeted Bonham’s wife, Lola, during the meeting. The mayor told her that her husband was a good person and will be sorely missed.

“He was just a wonderful man,” said an emotional Bonnie Price, the longtime village clerk. “He was always so helpful and helped me so often. He would always wear pink during October for me to mark breast cancer month. We were so lucky that he lived in this village for so many years.”

The board was considering appointing Kelly Zabinski as the village’s financial director. Zabinski had been vetted by Werner. She was expected to replace Dwayne Fox, who had to suddenly retire due to a medical condition.

However, some trustees felt the decision should be delayed until they get an opportunity to meet her. Zabinski was unable to attend the last board meeting.

Werner delayed any decision at that time because she wanted to check on some additional information.

She did add that Zabinski — who was also not able to attend Tuesday’s meeting — is highly recommended for her work in Willow Springs and Summit.

“I would like to meet with her,” said Trustee Rich Dziedzic. “She is going to be in a position that is pretty critical.”

Trustee Laura Packwood agreed that a meeting with Zabinski would be beneficial. However, time is of the essence.

“My only concern is that if we table this, there will be another two weeks before we make a decision. I know she comes highly qualified.”

Trustee Kevin Ryan agreed that a meeting with Zabinski would be best, but added that a decision has to be made soon.

“I think we have to have our ducks in a row,” Ryan said.

At Ryan’s urging, a special meeting may be scheduled within the week with members of the board and Zabinski. The mayor said she will contact Zabinski so she can attend the meeting.

The board approved an agreement with Verizon concerning utility pole-mounted wireless communication equipment.

Trustee Brad Urban, who is the head of the public works committee, said there were no water main events the past month. He added that bacterial samples collected on Aug. 5 and Aug. 23 by the water department were found to be satisfactory.

Urban said that removal of curb and gutters, along with necessary sidewalk upgrades, have taken place this month. The work was completed on Sept. 15, Urban said.

Wayne Demonbreun, superintendent of the public works department, spoke with a Lindahl Company representative regarding tentative dates for street grinding and resurfacing.

“The resurfacing of Depot Street will be completed before the Fall Fest,” Urban said.

The Worth Park District Fall Fest will be held from 1 to 7 p.m. Sunday, Oct. 3, at Gale Moore Park, 109th and Nordica. Along with a variety of family activities, the fest will include a beer and wine garden.

The Worth Police Department will face the Chicago Comets in the 6th Annual Beep Baseball Exhibition Game. The contest will be held at 5 p.m. Sunday, Oct. 3, at Homerding Park, 116th Street and Oak Park Avenue, Worth.

Spectators are encouraged to bring lawn chairs to view the game. All proceeds will be donated to the Comets, the Chicago area’s only visually impaired beep baseball team. For more information or to make a donation, contact Worth Officer Mike Cozzi, 708-448-3979, or [email protected]

The Worth Lions have requested and have been granted permission to use the land at 116th and Harlem to sell Christmas trees for their annual fundraiser. The trees will be sold from mid-November to Dec. 31. The Metropolitan Water Reclamation District has requested a written statement from the village granting permission for the Worth Lions to use the property.

The board has given tentative approval for a special use permit for Katrina’s Hair Salon, 6663 W. 111th St. Katrina Wynn is the owner.

The Mayor Oriental Store, 11228 S. Harlem Ave., a retail grocery store, was approved by the board. Yolanda Olivera is the owner.

Mobil Service Inc., 6455 W. 111th St., an auto repair shop, was also approved by the board. Tim Georgiopoulos is the owner.

Packwood, who is the head of the golf committee, said that the lights have been installed at the driving range. However, she mentioned that a small fire broke out near the Water’s Edge Golf Course due to a lit cigarette on the ground.

“It could have been because it has been really dry,” Packwood said. “People need to be careful when they dispose of cigarettes, cigars and any smoking materials.”