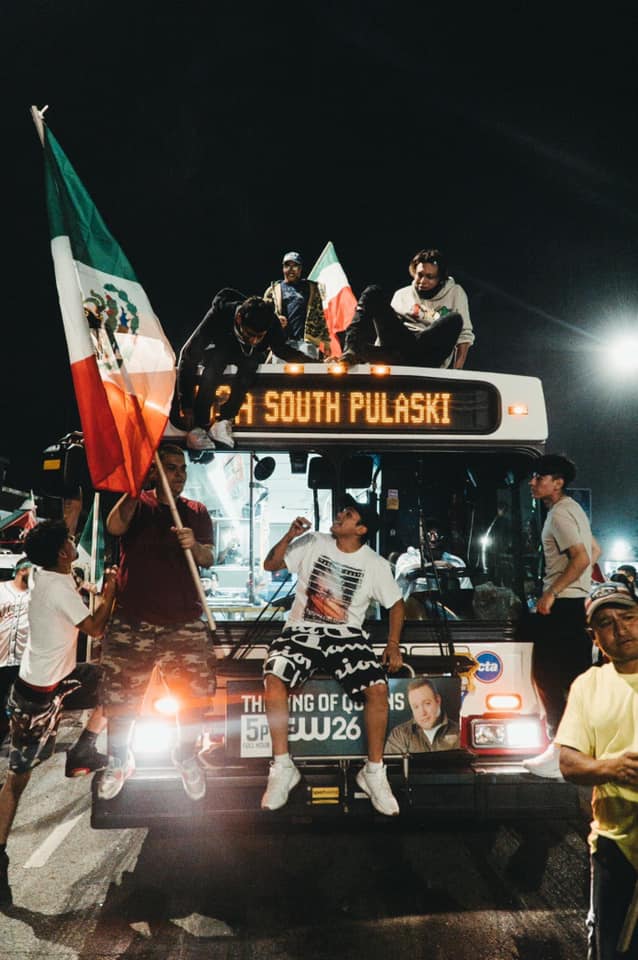 Young men whooping it up around Mexican Independence Day crawled on a CTA bus, forcing the driver to stop for more than 15 minutes near 47th and Pulaski. --Supplied photo

The worst of it appeared to occur on Friday night, as revelers—mostly young men—raced cars up and down the street and in nearby parking lots, until traffic became so clogged that Pulaski itself resembled a parking lot. 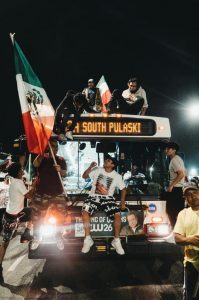 Young men whooping it up around Mexican Independence Day crawled on a CTA bus, forcing the driver to stop for more than 15 minutes near 47th and Pulaski. –Supplied photo

Revelers honked their vehicles’ horns and waved outsized Mexican flags. A number got out and walked up and down the street and adjacent sidewalks.

That spilled over into nearby sidestreets.

Chicago Police Zone 6 radio was crackling with officers on the scene describing the situation and requesting backups, which were brought in from two nearby districts to help Chicago Lawn (8th) District police. There were reports of lit fireworks being thrown into groups of people, shots fired from revelers’ guns, and beer bottles thrown at police.

Police SUVs were deployed along Pulaski to block further access to sidestreets, and revelers attempting to exit the Stevenson Expressway were turned away.

A limited amount of property damage was seen, like vandalized bus shelters—but the main concern was the large amount of trash thrown on the ground. Broken beer bottles, plastic cups, food wrappers and more were strewn about, mostly from 41st Street to 47th Street.

The following morning, workers from Archer Heights businesses were spotted cleaning up the debris.

“This is not what Mexican Independence Day is supposed to be about,” fumed Betty Delgado on social media. “I think of what I learned in school about the struggle for independence—the pain, the deprivation, the people who lost their lives. Then I see this? A bunch of party boys and party girls acting like idiots, like pigs? They dishonor the memory of those who sacrificed. This is out of hand.”

Sonia Cortes-Rodriguez added, “This is why [white people] don’t want to be around us, when we act this way. These loud, drunken slobs set us back as a people every time they do things like this.”

Others pointed out that irresponsible revelry is not unique to people of Mexican descent.

“Remember when the South Side Irish Parade was cancelled how many years ago?” asked Paul Novak. “It was a similar deal there: young men, many from outside the Beverly area, were coming in every March to party and trash the community along Western Avenue. The neighbors got fed up with it: the garbage, the vomiting, the public urination.

“I also recall years ago on Archer, young men racing their cars up and down Archer to use Polish Constitution Day as an excuse to act like savages,” he continued. “One year, they struck and killed a woman crossing the street.”

Others scolded those criticizing the partiers, labeling them Karens (a bigoted term used against white people who complain about the actions of their neighbors, perhaps especially neighbors who are people of color).

“Oh stop it, everyone,” said Jose Gallardo. “It’s one day a year. Get over it, Karen. Get back under your covers and go to sleep. I don’t hear y’all complaining when the same thing happens on the Fourth of July.”

Vols get busy in the aftermath 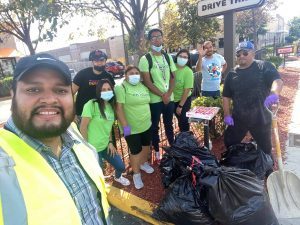 Volunteers organized by Envision Community Services pose for a photo after several hours’ worth of cleanup work along Pulaski. –Photo courtesy of Eddie Guillen

Seeing the litter and the reaction on social media, the non-profit Envision Community Services sprang into action in the days after the celebrations—organizing small crews of volunteers, led by community advocates Agustin Arroyo and Eddie Guillen and armed with brooms, shovels and trash bags.

What they did supplemented work already being done by employees from Pete’s Fresh Market, ALDI and other businesses in the corridor.

In fact some of the businesses—most notably Dunkin’ Donuts and Angelo’s Stuffed Pizza—went out of their way to provide food and beverages for the Envision volunteers.

The good deed did not go unnoticed, as a number of people took to social media to praise the effort.

“I think what this shows is there are good people in and around Archer Heights who care—who see what was done and responded with positive action to put things right,” one person wrote.