Skip to content
October 1, 2021/Comments Off on Lithuanians greet president in Marquette Park 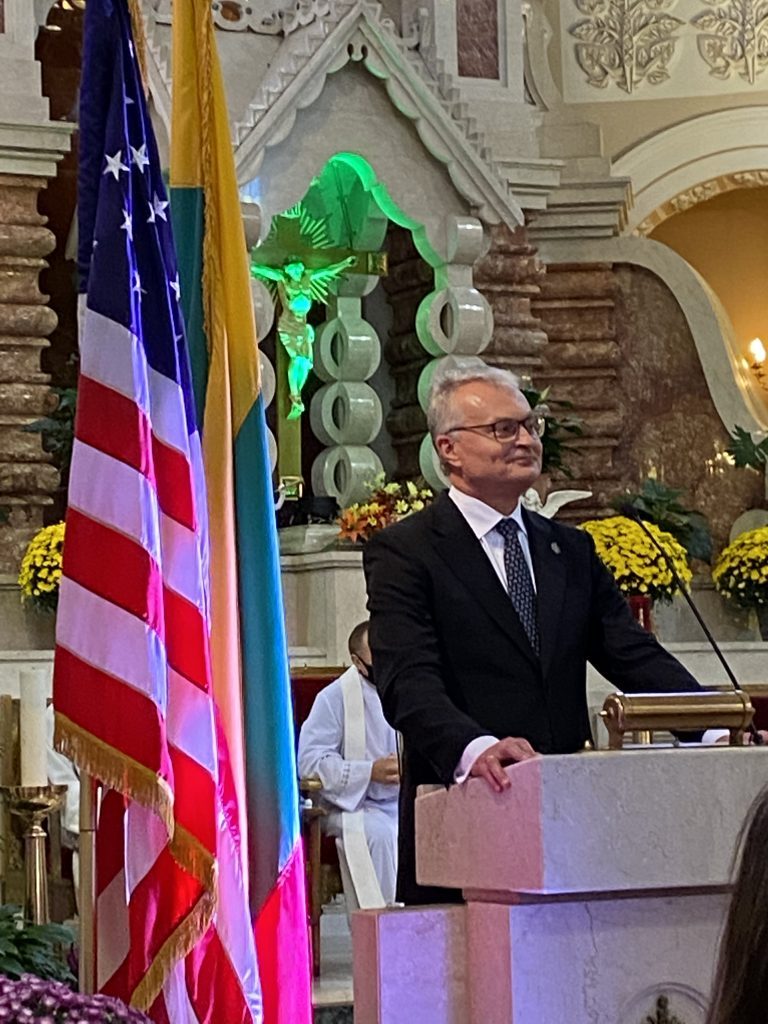 Traffic slowed to a crawl on California Avenue late last week as drivers took notice of the Lithuanian National Guard standing on either side of the Darius-Girenus monument at Marquette Park’s northeast corner.

A short walk away, another Guard contingent was lining up in the center aisle at Nativity BVM Church.

Both were waiting to give a formal welcome to Lithuanian President Gitanas Nausėda and First Lady Diana Nausėdienė. 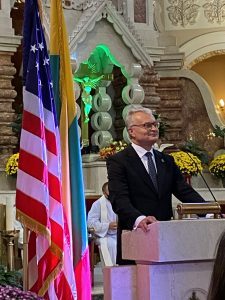 This was the 57-year-old president’s first visit to the U.S. His main purpose was to participate in the 76th session of the United Nations General Assembly.

Over the years, however, a Chicago side trip has almost been a kind of requirement for Lithuanian heads of state. The city once was home to more Lithuanians than any city in the world except for Vilnius, the national capital.

Nausėda, who came to office in 2019, used his time at the Nativity BVM pulpit to speak in Lithuanian of his family history, saying his maternal grandfather came to America and got a job in the coal mines.

“I never knew him but, growing up, this is the only way I knew of America. My grandpa died eight years before I was born,” he explained. “But through him, I have a strong sense of connection to the first wave of Lithuanians here and understand how important this is to all of us.”

Nausėda praised Lithuanian-Americans for keeping Lithuania’s language, history, culture and religious traditions alive in the U.S. “Regardless of where we live, we are all part of Lithuania,” he said. “We are one nation. one Lithuania.”

He also said he is “sincerely grateful to all those who have been patiently working for many years for the seeds of Lithuanian culture to germinate in the soil of the New World and bear fruits.”

Sister Therese Papsis SSC, who took four buses as a teen to attend Maria High School and later taught at both Nativity BVM School and Maria, praised Nausėda’s style and said the visit to the Marquette Park area was an honor.

“I just loved, as he exited down the [church] aisle, how the people flocked to greet him,” she said. “He stopped and took photos with each one.”

During the visit, Juozas Polikaitis provided dignitaries with a detailed history of Lithuanians in Chicago. Polikaitis, who currently heads the Lithuanian Services Office on 71st Street and is a finance committee member at Nativity, has worn many hats in the neighborhood over the years.

“I am more optimistic than ever [about the Lithuanian community’s future in Marquette Park],” he said. “We have a pastor who is well-liked, uniting the neighborhood, using new initiatives. And we have new arrivals from Lithuania all the time.”

(Author’s note: Many thanks to Daina Cyvas for helping with translations for this article.)