After spending more than three years in the Army, Emily Croucher was treated to one unforgettable day.

She was one of 93 women on an Honor Flight Chicago Operation HerStory to and from Washington, D.C.

Given to armed forces veterans for years, this was the first Honor Flight from Chicago that was strictly for women, she said. It was the 98th honor flight.

The Bridgeview woman, who lives in the house where she grew up, served in the Army near the tail end of the Vietnam War, thus making her eligible for the flight.

Croucher was one of the youngest women honored. She said one World War II veteran was 104. Another was 99. “She was so with it. No cane. No walker,” Croucher said.

Croucher learned about the flight “when it popped up online somewhere.” She applied and was accepted.

“We were supposed to go last year at this time, but because of COVID-19 (it was delayed),” she said.

Army Brigadier General Patricia Wallace accompanied Croucher on the entire journey. In the Army, Croucher had the rank of Specialist 4 who worked in flight operations for helicopters. Croucher enlisted because “I had a friend who was joining. We were going to go in together and medically they didn’t take her. So, I went in alone.”

Croucher wasn’t worried about serving in Vietnam “because that was pretty much done.”

“I enjoyed my time in the Army, the people and the job,” Croucher said. “My job was (later) civilianized, so then I fell back on my (associate degree in) recreation services and I was a water safety instructor, trained by the (American) Red Cross. I taught people how to swim.”

Croucher enjoyed her first ever visit to Washington, D.C.

After her honor flight landed at Dulles Airport, a heroes’ welcome complete with a band awaited, along with a police escort.

They first visited the Military Women’s Memorial, had a luncheon, and then went to Arlington National Cemetery.

“It was very moving,” she said of watching the changing of the guard at the Tomb of the Unknown Soldier. “You didn’t talk. All silence.”

The veterans then visited the Lincoln Memorial, which also impressed her.

The Vietnam Veterans Memorial “was amazing, the size of that wall.”

The women also saw the Korean War Veterans Memorial and World War II Memorial, had dinner at the airport, and flew back on Southwest Air to Midway Airport.

“Navy recruits walked us through the airport,” she said. “They had tons of people clapping for us. That made me feel good. You really felt like a veteran.”

“It’s time for women to get acknowledged,” Croucher said. “When they first started (in the armed forces) they only let women do medical and the post (office duties).”

Keeping with the military theme, there was even a mail call on the plane.

“My niece, Stacee Kane, is a fourth-grade teacher at Walker School, and she had her kids write letters,” Croucher said.

“They were so cute some of them. A lot of them had the impression I was at war. … They were really cute letters.”

Another surprise waited at Midway.

“When I got outside, I see my family there,” she said as her voice choked with emotion. “I didn’t expect that.”

Her four children, their spouses, six grandchildren and other family and friends were outside the airport. So were police cars from Bridgeview, Summit and Bedford Park to escort her home.

“It was really nice,” Croucher said. “Each policeman came and shook my hand. It was very respectful to be honored.”

She has souvenirs. Each woman on the flight received a photo book about our nation’s capital, a cap, and a Quilt of Valor. Her grandchildren had made colorful posters greeting her home.

A graduate of Argo Community High School graduate, Croucher worked there for 24 years as a special education aide and administrative assistant to the athletic director.

“My kids went there and now I have a granddaughter there.” said Croucher, who retired from Argo High three years ago.

Croucher, who hopes to volunteer to help with future flights, smiled and said her honor flight “was an emotional experience I’ll never forget.” 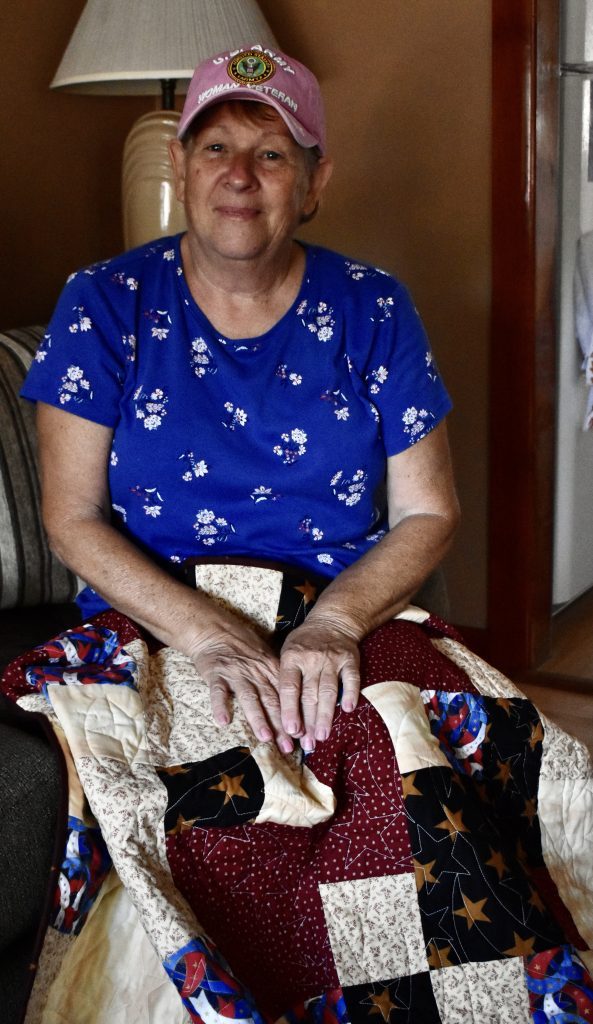 Emily Croucher, of Bridgeview, with the cap and quilt from her Honor Flight.