Skip to content
October 20, 2021/Comments Off on No casino at Lake Katherine — eighth-graders have fun at mock city council meeting

To be clear, the City of Palos Heights legal team is not investigating the feasibility of putting a casino on the banks on the Cal Sag Channel at Lake Katherine.

Nor did the city approve a skateboard park.

Nor an outdoor hockey rink.

All of that fake – and fun – news came out of City Hall Tuesday night during the yearly mock city council meeting prior to the regular meeting.

The mock meeting, sponsored by the Palos Heights Woman’s Club, gave area eighth-graders a chance to experience running a city council meeting and learn some of the ins and outs of local government. 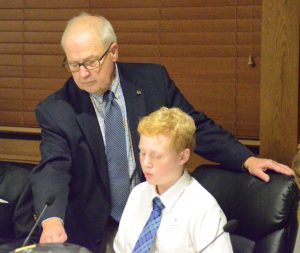 Winning the Mayor for a Day honor was Eamon Gayduk.

Not all of the information at the 20-minute meeting was false. One young alderman said the city’s Channel 4 facilities were recently toured by representatives from University Park, Oak Forest, Matteson and Chicago Ridge to get ideas for their community access channels.

Another correct report was that Kris Kringle Market will take place on Dec. 3-4 and there will be 75 vendors present.

Also, there was a true announcement about the Touch-a-Truck and Treat event from 5 p.m. to 8 p.m. on Oct. 28 at the Palos Heights Pool parking lot. Police, fire and construction vehicles will be on display and there will be plenty of candy handed out.