October 21, 2021/Comments Off on Evergreen Park welcomes own fields of dreams and honors Sexton

Jim Sexton, the former Evergreen Park mayor, shows his sign for the drive given in honor at the grand opening of the new baseball and softball fields. (Photos by Jeff Vorva)

Brand new fields and a retired mayor were the stars of the show on Oct. 14.

Evergreen Park High School had a grand opening of its new turfed baseball and softball fields. The fields were used in late spring, but this event was to celebrate the fields and show them off to dignitaries and guests, including former White Sox star Ron Kittle.

District 231 Supt. Tom O’Malley also turned the event into a celebration of former Evergreen Park Mayor Jim Sexton and is naming the driveway area behind the school and in front of the fields Honorary James Sexton Drive.

“Mayor Sexton has been an important part of our school community in a number of ways,” O’Malley said. “He has guided us on construction projects and has been a driving force.

“I remember sitting in his office and he said, ‘Tom, if you do this right, you are going to hit a home run not only for you but for the whole community.’ He has always been there for us when called on.”

Sexton said he was humbled by the honor and remembered the time when O’Malley hit the former mayor with a slew of ideas – including creating an indoor sports complex out of the former Evergreen Bath and Tennis Club. 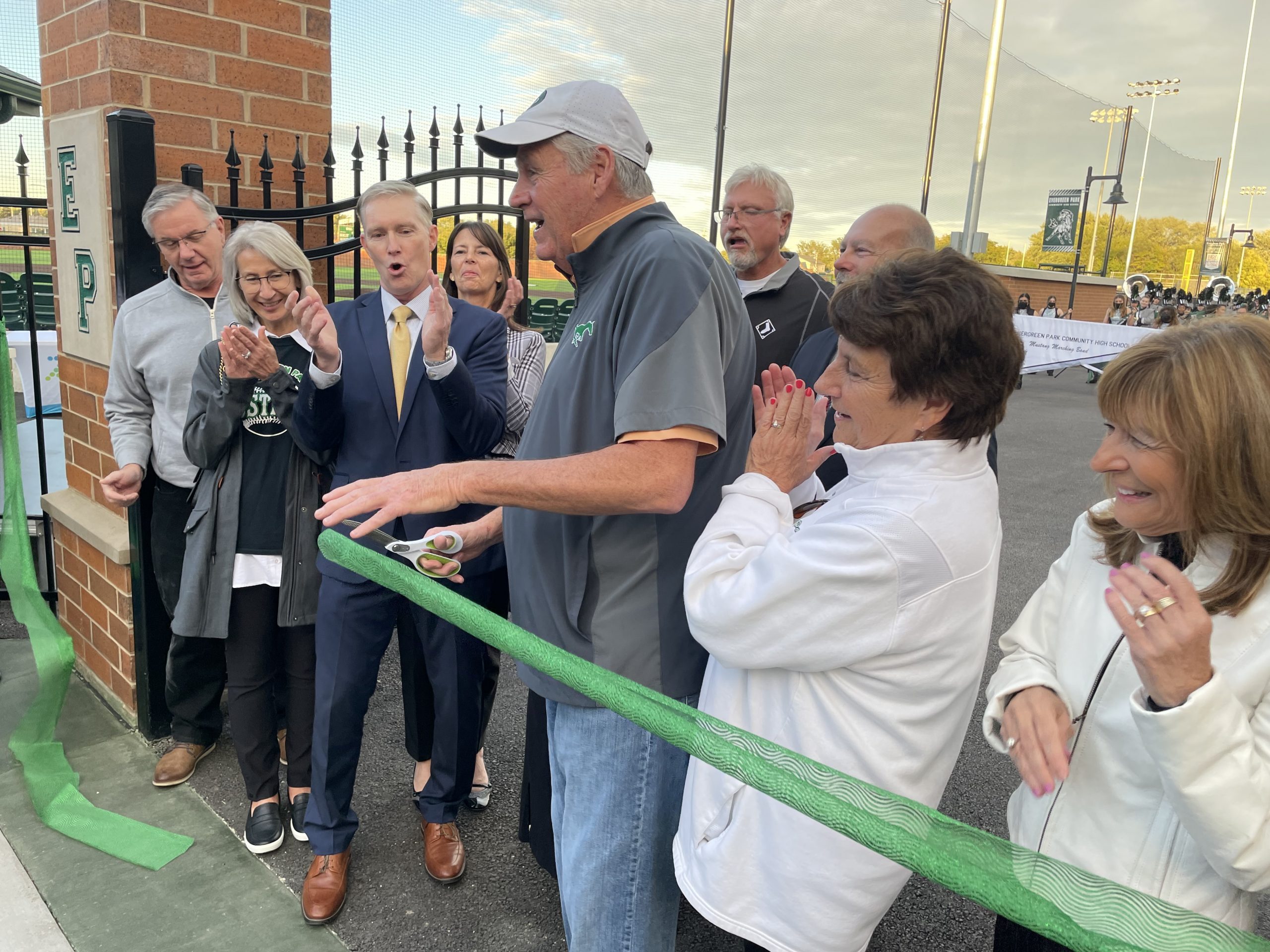 O’Malley said they are “one of-a-kind, state-of-the-art” fields with whistles and bells that include large press boxes, dugout and locker room areas. There are stadium seats that came straight from the Louisville Bats minor league baseball stadium.

The field can absorb rain and there likely will be fewer rainout games at the school.

Jim Froslid, an official with Brock USA, which helped build these fields, bragged these are two of the best fields in the country.

“Most of those fields are just the infield are just turfed in the infield and here, there is also turf on the outfield,” Froslid said. “The mindset is that in addition to softball and baseball, they have all other field sports where they are playing and training in the outfield. It’s not being done in other parts of the country. They are utilizing every inch of this field.” 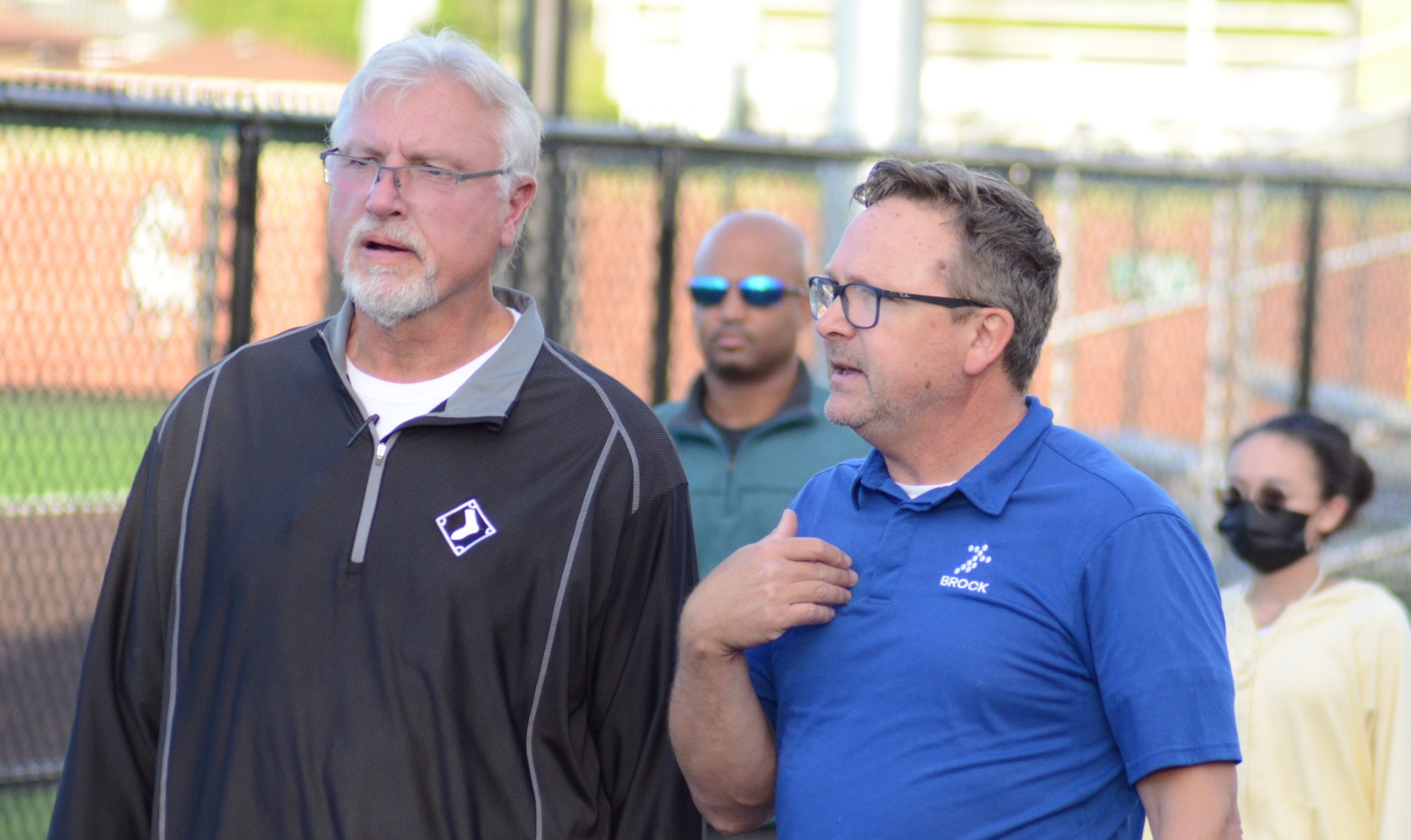 He added that safety is a plus for the fields.

“We built them in mind with the athlete first,” Froslid said. When you are on this field, you will notice there is no crumb rubber in the field. It is wood. It absorbs rubber and it cools the field. Under there is a shock pad that if you fall on it, it absorbs impact.”

Current Mayor Kelly Burke was impressed. She had a sneak peek before the grand opening.

“Like most people, it was always driving past it on 99th Street and wondered ‘what the heck is going on in there?’” she said. “Now that I got to see it, I was wowed by this facility. It’s just fantastic. This is something the whole community can take advantage of.”

Kittle said he didn’t start playing on a turf field until he reached the Class AAA level in the pros.

“It’s a beautiful facility and the school system and the town is lucky to have something like this,” he said. 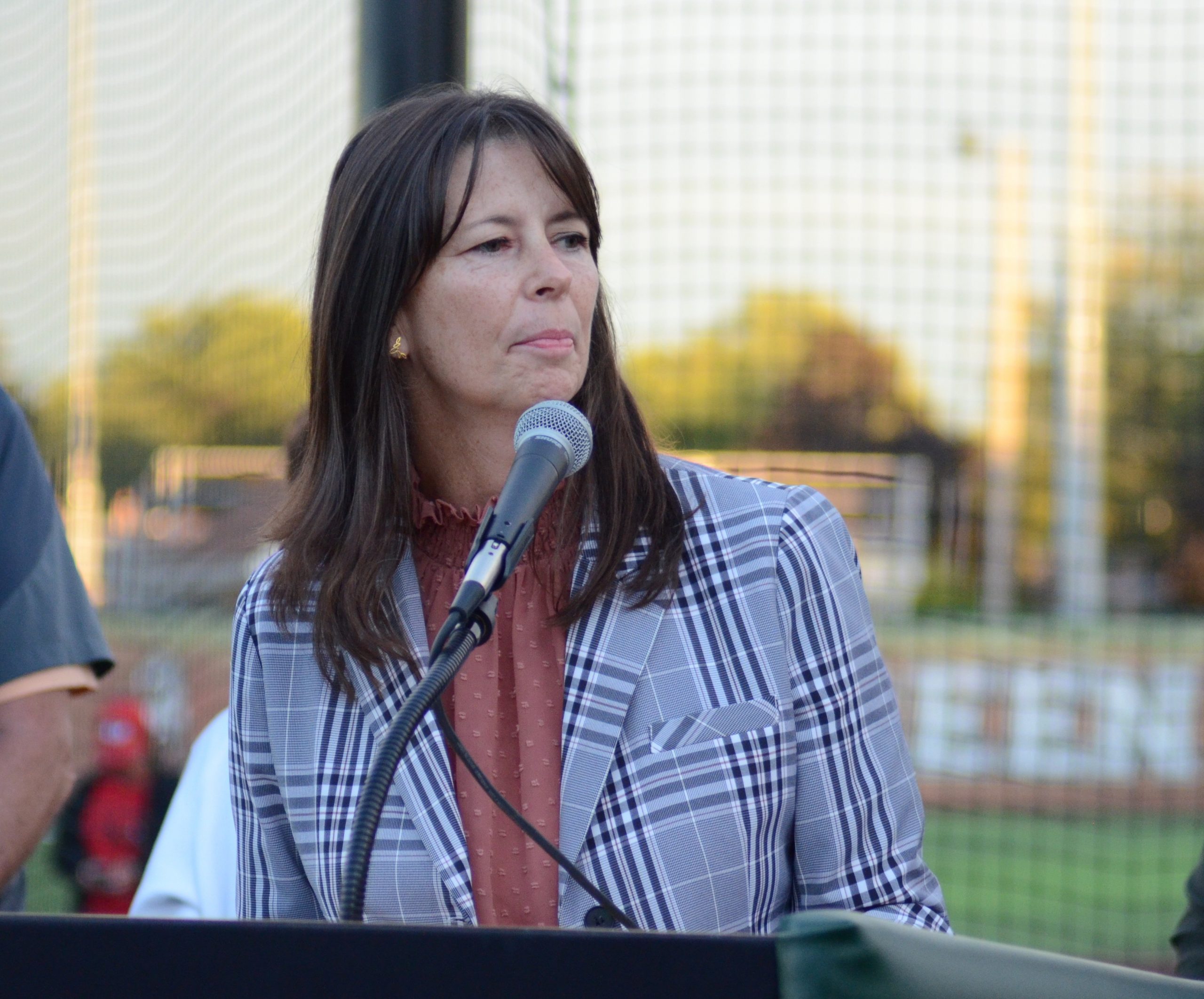 Evergreen Park Mayor Kelly Burke gives a speech to the crowd at the ribbon-cutting ceremony for the new baseball and softball fields at EPHS.