The buzz and postgame emotions from Brother Rice’s 40-21 victory over Marist on Friday was abbreviated.

Because the heralded game was played on the final regular season weekend of the year, these area and state powers and bitter rivals quickly turned their attention to the playoff pairings announcements, which came less than 24 hours after completion of the programs’ annual regular-season matchup.

The situation is similar to that in college basketball when the Big Ten Conference wraps up its league tournament with a championship game, which swiftly becomes an afterthought when a few hours later the March Madness brackets are announced on Selection Sunday.

The IHSA criteria for seeding teams has remained the same over the years. The overall record takes precedence, followed by the amount of victories a team’s opponents have.

Brother Rice and Marist have been in the penthouse of the Class 7A and 8A Associated Press rankings all year, but did not get great seeds.

Brother Rice (7-2, losses to Loyola and Joliet Catholic, the top overall seeds in classes 8A and 4A, respectively) picked up the No. 9 seed in Class 7A and will host Wheaton Warrenville South (5-4).

Glenbard East has beaten only two teams with winning records and has losses to unbeaten South Elgin (41-7) and one-loss Glenbard South (40-20).

Marist’s history shows that a sub-par seeding doesn’t mean much. The RedHawks entered the playoffs 5-4 in both 2015 and 2019, and in the first case advanced to the Class 8A state title game and in the second went to the semifinals.

“Realistically, getting in is the key,” Marist coach Ron Dawczak said. “Once you are in, anything can happen.”

The Tigers needed a Week 9 win to make it to the playoffs and pulled off a tight 10-7 victory over Glenbard North, which came into the game with a 6-2 record. 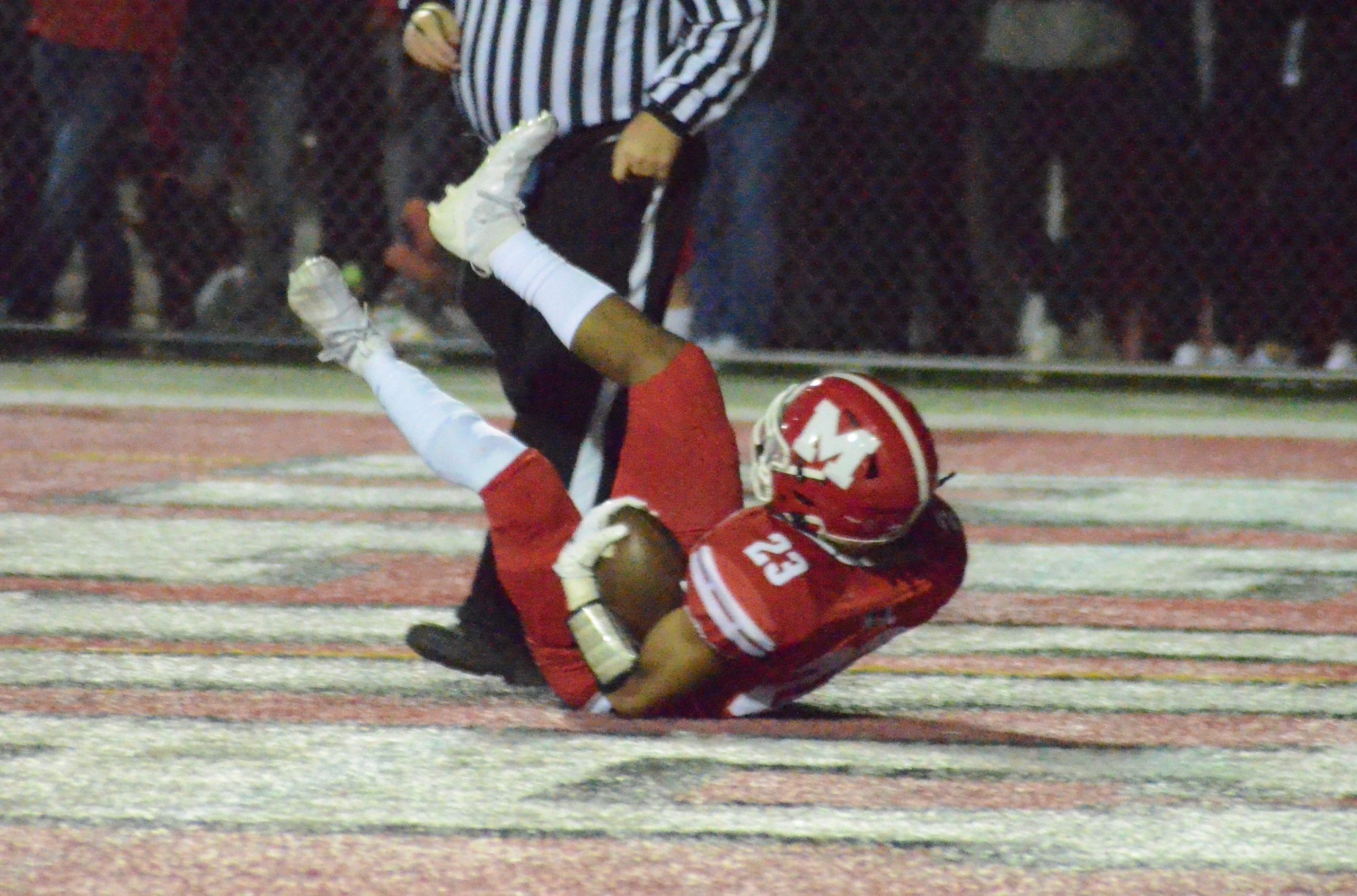 Marist’s Jaylen Johnson tumbles in the end zone after helping to put his team ahead, 14-0 in what turned out to be a loss to Brother Rice Friday. Photo by Jeff Vorva

As for the Brother Rice/Marist tilt to end the regular season?

An estimated crowd of 4,000 saw Marist take a 14-0 lead before Brother Rice scored 40 straight points. Marist tacked on a touchdown at the end.

Crusaders quarterback Jack Lausch threw for 162 yards and touchdowns to Da’Kobie Wordlaw and Ricky Taylor, and he ran for 175 yards and scored three times. His 70-yard run in the first play of the second half helped put the Crusaders ahead, 23-14, and took some steam out of the RedHawks.

Interceptions by Dameon Hall and Sean Kinard in the third quarter also helped pave the way for Rice, which gave up 187 yards in the first quarter and 181 the rest of the way.

“We had a talk, and it was just up from there,” Hall said. “We stayed together. We made plays. Everyone did their job. Nobody was selfish and we came up with the victory.” 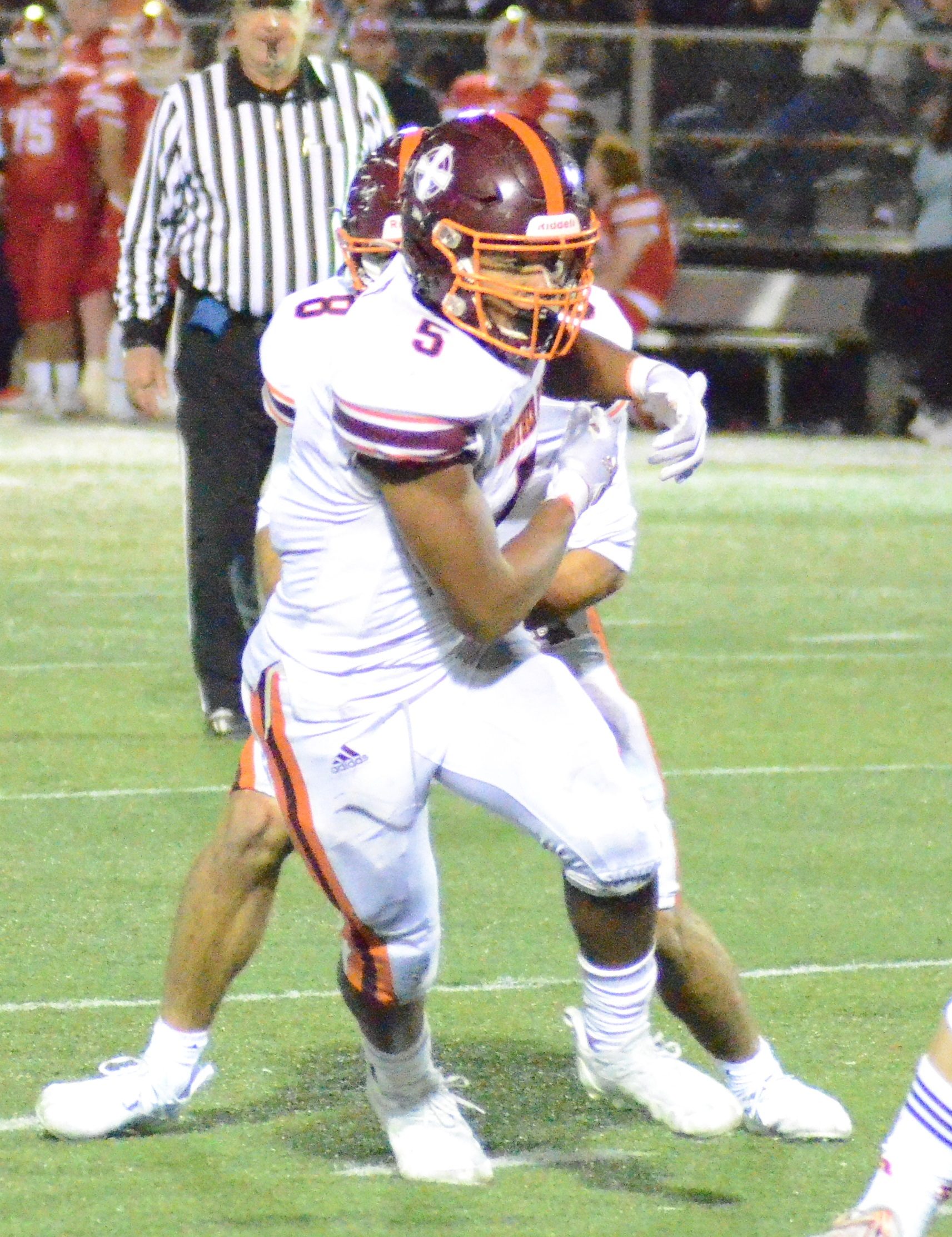 Brother Rice’s Aaron Vaughn is used as a decoy for a Jack Lausch run in Friday’s victory against Marist. Photo by Jeff Vorva