October 28, 2021/Comments Off on Oak Lawn trustees pleased with progress on flooding 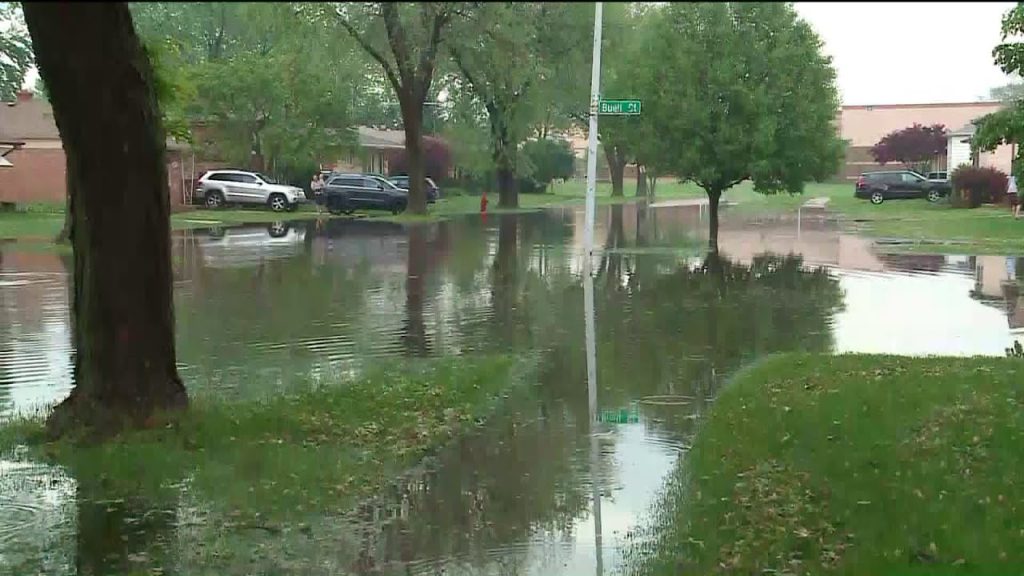 Trustee Alex Olejniczak (2nd) said the village held up well during the downpour that fell Sunday and Monday.

“With all the work we are doing at Stony Creek and with the MWRD (Metropolitan Water Reclamation District), we avoided major flooding,” Olejniczak said during the Oak Lawn Village Board meeting Tuesday morning. “We have been working with the Army Corps of Engineers and the MWRD. We will have federal funding to address flooding issues in Oak Lawn.”

Despite some tree branches that fell, reports of flooding were nearly nonexistent. Besides Olejniczak, Trustee Ralph Soch (6th) was also encouraged by action being taken to alleviate flooding, which has been a major problem in his district.

Soch noted that after a recent meeting with Community High School District 218, a plan to use some fields to alleviate flooding is a step closer. Conversations with administrative officials have been encouraging, Soch said.

Land could be available near 109th and Kenton.

Village Manager Tom Phelan pointed out the plan would not take up all of the playing fields.

“There will be minimal if any loss of the field,” Phelan said regarding rumors that the playing fields would be lost. “We finally have some federal funding.”

Oak Lawn officials were in agreement that the penny amusement push tax remain on each bet placed on video gaming terminals located in the village.

The Illinois Gaming Machine Operators Association, which represents the terminal operators, opposes the push tax. They argue that the ordinance — that went into effect in Oak Lawn on Jan. 1, 2020 — violates the Video Gaming Act, which prohibits player tracking.

Trustee Paul Mallo (3rd) said during the meeting that the terminal operators group is suing the village. The state’s new gaming law places a 33% tax on gross revenue from the video game terminals to be split between the state and local government.

Mallo said the village currently receives just 5%. Mallo and Trustee William “Bud” Stalker (5th) said that since they are providing the services and the video game operators are reaping large profits, the village should be receiving more revenue.

Oak Lawn and several other municipalities at first fought back against the terminal operators. But since then, only Oak Lawn and Waukegan have continued to fight the association. Waukegan just recently won a court battle over the issue.

Phelan said that several businesses in the village have paid the tax. Phelan added that he is “cautiously optimistic” that the village push tax will be upheld.

All the trustees stated that there has been an increase in rodent infestation in their districts. Trustee Tim Desmond (1st) said that eliminating rats is an ongoing issue that needs everyone’s attention.

“You would not have rats if they have nothing to eat,” Desmond said. “If we don’t correct it, we will always have this problem.”

Desmond said that residents should get rid of bird feeders and dog waste, both a food source for rats.

Olejniczak said that the problem is being met head on but residents need to have garbage cans closed. Desmond and Olejniczak said a task force has been aggressively trying to eliminate the rodents.

“This is a problem the whole board knows about,” Olejniczak said. “We are addressing the problem.”

Phelan said despite what people think, rats have been with us all the time. He pointed to published reports that stated Chicago has the largest rat population among large cities across the country.

“If we can eliminate the food source, we can take care of the problem,” Phelan said. “We just came off a warm winter and we have COVID. After the restaurants closed last year, the rats moved on to find another food source. They started going everywhere.”

Soch and Phelan also said they have grown weary regarding the traffic congestion that is taking place at the Starbucks located at 103rd and Cicero. Phelan said there has been progress but would like to see this problem eliminated sooner. Vehicles are lined up for drive-through service that often extends onto Cicero Avenue.

“I hate to say it but this is a potential death trap,” Phelan said. “The line is so long and it goes right into traffic.”

Mayor Terry Vorderer said during the Tuesday meeting that he was going to go on the Honor Flight Chicago trip to and from Midway Airport. Vorderer, a Vietnam Army veteran, was scheduled to go on the trip this past Wednesday.

“I want to thank all the people who put together the honor flights,” Vorderer said.