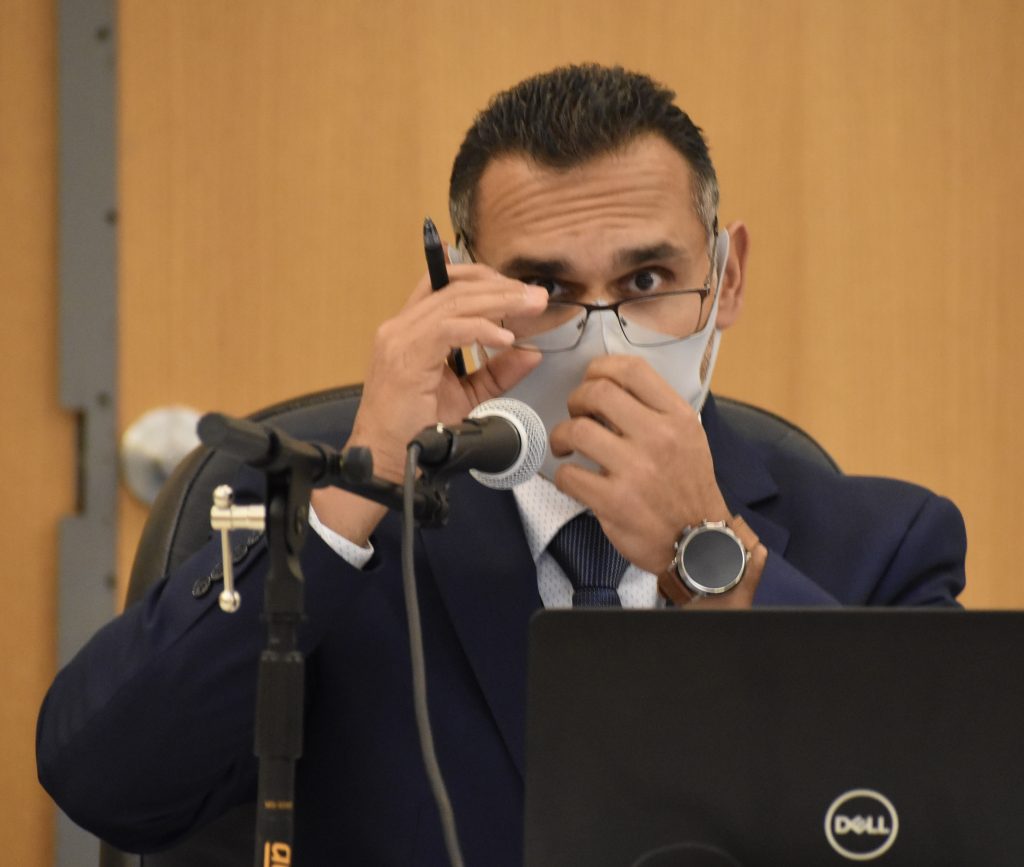 Lyons School District 103 Supt. Kris Rivera adjust his face mask during the board meeting on Oct. 26. (Photo by Steve Metsch)

Lyons School District 103 is no different than restaurants, stores, and other businesses when it comes to finding employees these days.

For whatever the reason — some say it’s the coronavirus pandemic — all of them are having trouble finding workers.

With that in mind, the school district has dramatically upped the ante in an attempt to recruit more short-term teachers.

The school board at its most recent meeting voted unanimously to increase the daily pay from $110 to $150 for short-term substitute teachers.

The 36 percent increase is needed, Supt. Kris Rivera said, because the company used by the district, Kelly Education, is having a hard time finding people to fill in for short-time jobs.

“It’s very competitive right now trying to get substitute teachers,” Rivera said on Oct. 26. “If you look on Ogden (Avenue) you can see signs on our fences, recruiting for the subs.”

People now need an associate’s college degree to be a substitute teacher. The limit had been a bachelor’s degree.

Not finding short-term teachers means teachers in school buildings must give up their prep periods to fill in for colleagues who may be absent.

“That makes for a long day,” Rivera said.

Rivera said short-term would be for someone filling in for a several days, and not for a long-term leave of absence that may be several weeks. That rate of pay is higher, he said.

“This is an attempt to be more attractive in this area to bring more subs to our district,” Rivera said. “If someone is gone for six weeks, that would be filled by a long-term sub.”

By sweetening the pot, the idea is more people will be interested in working as a short-time teacher, Rivera said. Lyons pays Kelly which then plays the workers, he said.

In other business, the board approved a $5,500 increase in the base salary for Human Resources Director Stephanie Koenig.

The board also unanimously approved additional language to The Stepping Stones Group agreement that would allow termination of a contract with 30-day notice.

Board member Winifred Rodriguez received a pin from the Illinois Association of School Boards in recognition of her completing needed training.

Rodriguez achieved the title of “master board member.”

“It’s through training that you move up,” said Rodriguez, who is in her third year on the school board.

The IASB recognizes board members for their dedication, time and service, Rivera said.

Rivera read a proclamation from Gov. Pritzker, in recognition of Principals Week and Principals Day, who noted they play “an integral role” in education.

There were no public comments made during the meeting held in the cafeteria at Washington Middle School, 8101 Ogden Ave.