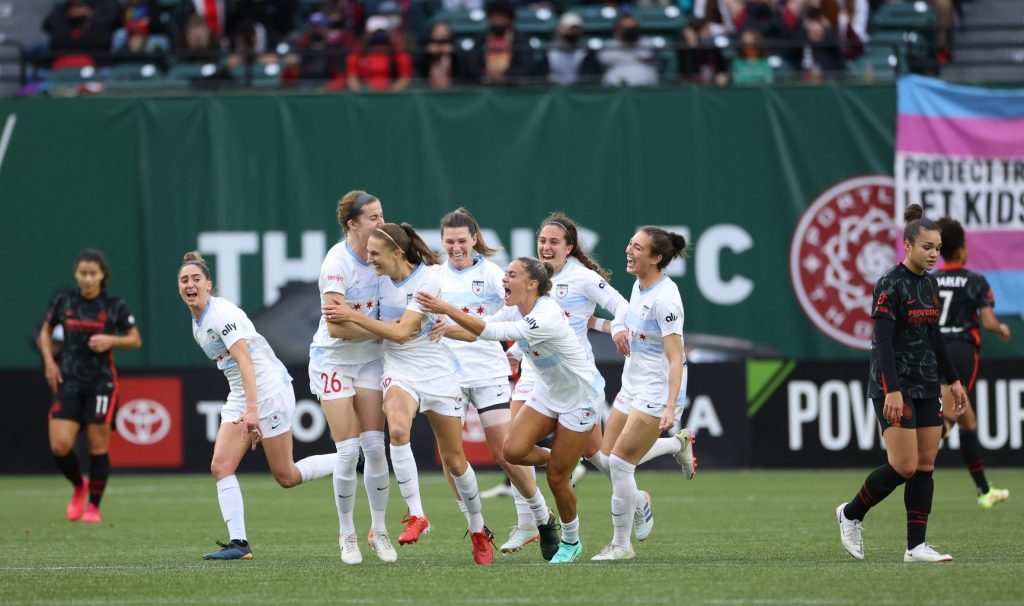 The Red Stars, shown celebrating in Portland, are one win away from a NWSL title. Photo by ISI

The Chicago Red Stars opened the season in May with a full squad and dropped a 5-0 decision at Portland in one of the most lopsided defeats in franchise history.

Then, on Nov. 14, with a team depleted by injuries and illness, they shocked the Thorns, 2-0, in the NWSL semifinals for their first win in Rip City since 2013.

The fourth-seeded Red Stars will take on the third-seeded Washington Spirit for the league title at 11 a.m. Saturday, Nov. 20 at Lynn Family Stadium in Louisville.

It will be Chicago’s second title-game appearance in as many seasons, having lost to North Carolina in the 2019 championship match. The league canceled the 2020 season because of the pandemic.

Red Stars coach Rory Dames said six players who could have been in the starting 11 were not available, but the women who replaced them during the course of the season and in the win over Portland have helped the team get this far.

“Resiliency has been one of our main words for the year,” Dames said. “The group bends but they don’t break. They know their roles. They believe in themselves.”

One of the Red Stars’ strongest players in recent weeks, Kealia Watt, left the semifinal game with an injury in the 30th minute. Her replacement, Katie Johnson, scored a goal seven minutes later.

Despite the final score, the Red Stars were outplayed as the top-seeded Thorns had a massive 21-5 shot advantage and had a 435-289 passing advantage. But Miller (seven saves) and the defense were able to overcome barrage and the Red Stars are back in the championship game. They dropped the 2019 title match, 4-0, to North Carolina.

Washington comes into the title match 7-0-1 record in its last eight matches, including a 2-1 road win over the second-seeded OL Reign in the other semifinal on Saturday.

During this run, the Spirit also beat the Reign on the road toward the end on the regular season, 2-0.

Much of the winning came after former coach Richie Burke was fired by the league after an investigation into allegations of harassment. Kris Ward took over as interim coach.

“Kris has done an unbelievable job stepping in,” Dames said. “There is a big improvement, and to go into Seattle and win two against the Reign is very hard to do.

“It’s going to be quite a challenge for us.”

The Red Stars have gone 1-1-1 against the Spirit this year.

The first game was a 1-1 draw at SeatGeek Stadium in Bridgeview on June 19, with Morgan Gautraut scoring in extra time to prevent a loss.

The Red Start beat the Spirit on the road, 1-0, on July 1. Mallory Pugh scored the lone goal.

Another celebration in Chicago?

Dames said it would be huge for women’s sports in Chicago if the Red Stars can bring home a championship shortly after the Sky won the WNBA title.

“I went to their final game and it was a pretty cool experience,” midfielder Dannielle Colaprico said. “That was badass. They were a bunch of bosses on the court.

“This is our city and we gotta do it for Chicago.”

Rodolfo Sulia scored his first goal and Wojciech Wojcik scored his seventh of the season in the 85th minute to help the House improve to 7-8-2.

The House closes the fall season in the National Independent Soccer Association with a battle against California United at 7:30 p.m. on Saturday in Bridgeview.