Skip to content
November 19, 2021/Comments Off on Thousands tried, but she’s Top Dog 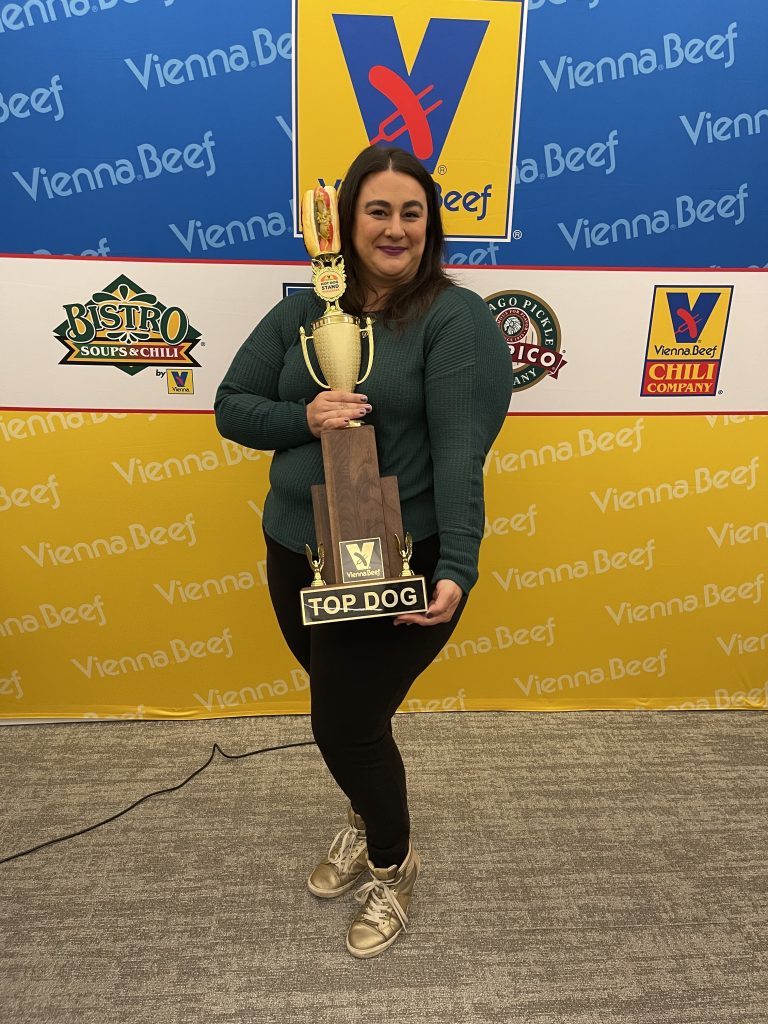 (708) 496-0265 • [email protected] this second year of the pandemic, Stephanie Esposito found a fun way to safely beat solitary confinement and use her love of a challenge.

The Garfield Ridge woman told me when saw a tweet about the Vienna Beef Hot Dog Stand Challenge, “It sounded really cool. I’m always up for a challenge.”

Stephanie has a first place trophy to prove she conquered the challenge and was named Top Dog by officials at Vienna Beef. 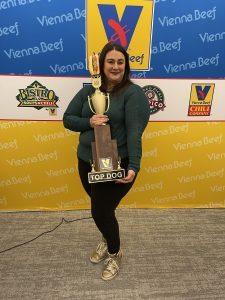 The Challenge was devised by Vienna Beef to get folks out of the house and patronize eateries selling its hot dogs.

Rules were simple. Visit 367 participating locations in the Chicago metro area, including Southeast Wisconsin and Northwest Indiana, from August through October.

The field was crowded. More than 4,300 competitors traveled across the greater Chicago area (including Southeast Wisconsin and Northwest Indiana), visiting as many Vienna Beef Hot Dog Stands as possible. The Challenge received more 29,000 check-ins, or Hot Dog Stand visits, in just 60 days.

Stephanie visited all 367 locations by Sept. 20, making her first to finish. She relished her triumph, but added she found the journey itself fun.

“It was fun. I got out, but not in a crowd of people. I got to explore the area,” Stephanie recounted.

In addition to venturing far north and south, Stephanie did get to visit a few local eateries serving Vienna Beef hotdogs, including Beefy’s at 58th and Harlem, Donald’s Famous Hot Dogs at 48th and Central and L & M Hot Dogs at 47th and Leamington.

Stephanie was a frequent visitor to L & M, which she called her favorite, because it was near where she worked–LeClaire-Hearst Park, 44th and Leamington, as a physical instructor. When we were talking, Stephanie let me know she has received a promotion and would be starting new duties at Curie Park this month. Congratulations, Stephanie!

Stephanie is celebrating 20 years from when she started as a day camp supervisor and 11 years as a year-round employee of the Chicago Park District.

“I like building programs and building the community, especially for the kids. I look forward to continuing that in my new position,” Stephanie said to me.

She grew up in Garfield Ridge, attending St. Jane de Chantal School and then Queen of Peace High School. For college, she went to Western Illinois and Columbia.

I was curious. I asked Stephanie since she visited almost 400 hotdog stands, did she eat a similar number of hot dogs?

Making the announcement was Nazareth Principal Therese Hawkins. My thanks to Alena Murguia for sharing the news with me.