Skip to content
November 30, 2021/Comments Off on Sanad feeds the hungry in Chicago Lawn

More than a thousand served 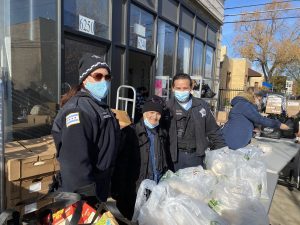 Have faith. Keep going. It will all work out. That was the advice Fatima Abu Eid, director of Sanad Social Services, gave to her daughter Aber, who runs the Sanad Food Pantry, upon being notified that the Greater Chicago Food Depository would indeed be giving them hundreds and hundreds of turkeys to distribute last week. This was in addition to the fruits and vegetables and shelf stable foods they would garner to accompany those turkeys.

With those words in mind, that is how on a sunny but chilly Friday in November Sanad Social Services was able to serve more than 1,000 guests at their food pantry on 62nd and Spaulding, giving them the makings for a Thanksgiving dinner for their family.

“She never says no or turns anyone away,” said Aber when describing her mom, Fatima.

Distribution started at 9 a.m. sharp but folks were lining up by 7. Fatima and Aber were on site by 6 a.m. with their volunteers close behind. An assembly line that worked like a well-oiled machine was set up in one part of the building filling bags with boxes of stuffing and other shelf-stable foods. Behind them fresh fruit and vegetables were being unpacked and passed over to add to the groceries.

Out in front on Spaulding, tables were set up where Chicago Lawn (8th) District CAPS Officers Preus and Sepulveda were handing out the turkeys and groceries. Additional tables held boxes of face masks and flannel blankets. More tables held gloves, scarves and winter hats, these having been donated by Hina Rehman, CEO of Calling Care Services, which just opened up next door to Sanad in June. Yet another table held hot to-go meals for each guest as they left.

Among those stopping in to offer support were Nancy Andrade, Commissioner of the Chicago Commission on Human Relations, Jennifer Scott a specialist with the department, Francoise Johnson who worked as a translator for Mayors Washington and Daley and was formerly a part of the Commission, and former Alderwoman Toni Foulkes.

As the day came to an end and everything was tallied, Aber addressed the volunteers telling them they had made Sanad history. “We have never served this many and it would never have been possible without your dedication.”

Why so many? Summing up her theory she asserted, “In the aftermath of COVID, prices are going up. We are in the perfect storm. Thank goodness we could be here to help.”