Skip to content
December 9, 2021/Comments Off on Worth seeks new direction for Water’s Edge golf course 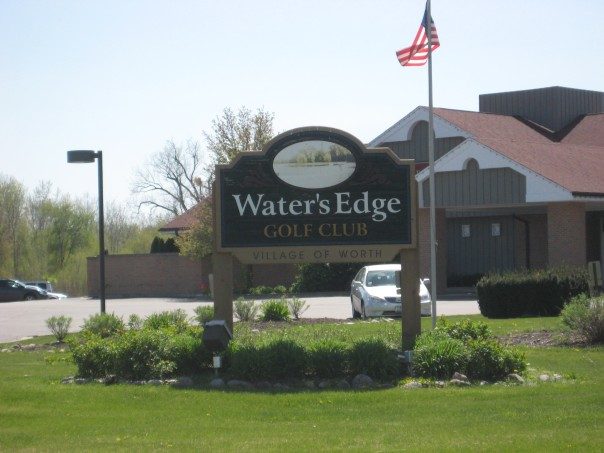 Worth officials hope that the third time is the charm with a proposal for new management of the Water’s Edge golf course.

Two representatives from Orion, which is based out of Kansas City, Mo., attended the Worth Village Board meeting on Tuesday night to respond to questions and provide a vision for running the golf course.

Orion representatives Matt Roberts and Shane Gardner said they would like to bring in their own computer system, which would cost about $5,000 and would be paid for through online revenues. The new system would be cost effective and user-friendly, Roberts said.

Worth Mayor Mary Werner had met with Orion representatives last spring and they toured the golf course. The mayor had some concerns regarding managing revenues from the golf course and clubhouse. Werner told Roberts and Gardner that they would like to be provided with the invoices each month.

Roberts said they had no problem with that. However, Orion would also manage the revenues as well.

“We are little gun shy,” Werner said. “We’ve been burned by two companies in the past.”

Billy Casper Golf had been managing the course since 2010 and had signed a two-year extension in 2020. But the mayor said the managing policies of both Billy Casper and Kemper Sports Management had her concerned. Kemper Sports was the first manager of Water’s Edge when it opened in 1999.

Trustee Kevin Ryan asked the Orion representatives if the weather would pose any problems for them?

“Kanas City does have some crazy weather,” Roberts said. “Maybe nothing like here, but pretty close.”

Trustee Brad Urban wanted to know if Orion was seeking ways in which more revenue sources can be developed during the winter months when golf is nonexistent?

“There’s opportunities and we have to find them,” Roberts said. “We stay small by choice. We want to work with Water’s Edge.”

Urban asked the representatives what type of a contract they are looking for? Roberts said they would prefer a three- to five-year contract.

“Sometimes weather plays a factor,” Roberts said. “You have a couple of years where you just have bad weather. We would like to develop consistency and work with the village over a few years.”

A decision will be made at a later date on Orion. Trustee Laura Packwood, who is the head of the golf committee, thanked the Orion representatives for attending the meeting.

Werner announced that Mark Micetich, who served as the Worth police chief from 2014 to 2020, resigned from his most recent post as a member of the police and fire commission. A replacement is being sought.

An ordinance was approved to restrict parking on 110th Place just west of Octavia Avenue for residents of this street only.

Werner said that she had been approached about this matter dating back several years ago due to a lack of parking available on the street. According to the ordinance, residents would be allowed to receive an additional two parking passes for friends or additional relatives.

If a resident is planning a party, additional passes can be provided for that day. Board members stated that parking has become a premium along that block, especially overnight. Often vehicles are parked in front of a fire hydrant, according to Trustee Rich Dziedzic.

“Parking is becoming pretty bad there and with snow coming, it is a good time for this,” Werner said. “A lot of people on that block have reached out to us.”

Most of the vehicles parked along 110th Place reside in the nearby apartments. Werner emphasized that there is no parking allowed on Octavia Avenue.

The Worth Cruisers Car Club will hold its fourth annual Christmas Party from 6 to 10 p.m. Monday, Dec. 13, at the Garden Chalet Banquets, 11100 S. Ridgeland Ave. Tickets are $20 per person and can be paid for at the door.

The annual Adopt a Sailor event will be held on Christmas Day at the Marrs-Meyer American Legion Post 991, 11001 S. Depot St. Members of the post and volunteers will host up to 40 recruits from the Great Lakes Naval Training Center.

Recruits will be served lunch, dinner and snacks throughout the day. Urban is asking if games could be provided, along with laptops and cellphones for the day. Recruits would have an opportunity to play games or go online. The cellphones would allow the recruits to call relatives.

The post is also asking if anyone could also provide TVs, DVD players, video game consoles, recliners and sofas.

“We want to give them a good day,” said Urban, one of the organizers of the event. “They are very grateful.”

A business license was tentatively approved for Worth Mobil, 11458 S. Harlem Ave. The business owner is Ancy Joseph.

The mitten tree is still on display at the Worth Village Hall, 7112 W. 111th St. Werner complimented Village Clerk Bonnie Price, who came up with the idea.

“The whole tree is completely filled with mittens and gloves,” Werner said.